My strategy this season often involves waiting on the tight end position. It’s not that I don’t like Gronk, I do… Same with Jimmy Graham and Julius Thomas but all three of those players come with a hefty price tag. Often during those early picks, I’m selecting a running back or wide receiver – leaving my tight end position vacant until the late rounds.

Here are some of the late round tight ends I target:

Despite showing the ability to be his team’s top tight end last season, Martellus Bennett is dropping in drafts. Last season he finished as TE10 and a full season of Cutler may give him the opportunity to improve. Using RotoViz’s Game Splits App, it’s easy to see how much better Bennett was when Cutler was on the field. 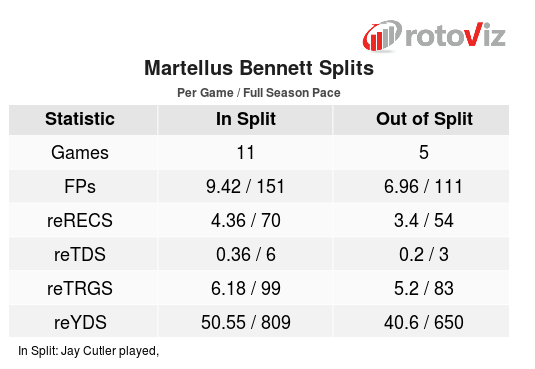 We know the Bears are going to put up a lot of points after finishing 2nd in points scored last season, behind only the Broncos. Marquess Wilson’s injury insures that Bennett will continue to see consistent targets. At his current draft position, Bennett is a low-risk, value pick.

Finishing as the 8th best tight end last year, Charles Clay had a surprisingly good season. Despite a coaching change, he’s still one of the best playmakers on his team. Now being drafted behind rookie tight end Eric Ebron, Clay is a value pick in the 13th round.

Although he didn’t have a good year last season, that was expected – tight ends rarely break out as rookies. It takes time for tight ends to gain the respect of coaches as blockers, which gives them the playing time that’s crucial to break out.

Now entering his second season, I believe Eifert will overtake Jermaine Gresham because he’s the better player. Using RotoViz’s College Career Graphs, we can see that Eifert had a higher percentage of his team’s yards and touchdowns. 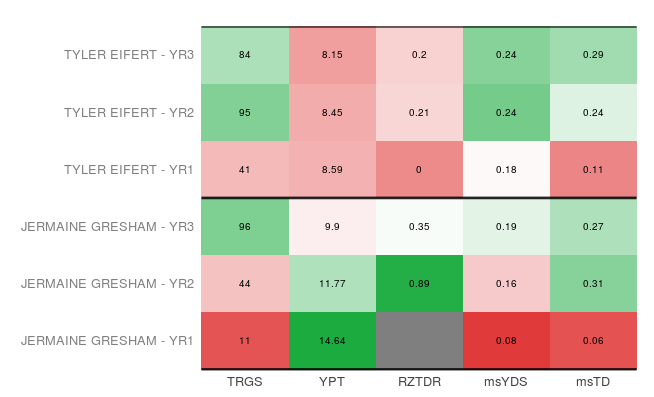 Few possess the special qualities of Rob Gronkowski – Travis Kelce is one of those guys. Look at how their college number compare:

Gronk is certainly better but Kelce holds his own. At 6’5” 260 lbs. with the ability to run a 4.64 40, Kelce is a big play waiting to happen. He’s already made noise this preseason. On a team that is desperate for playmakers outside of Jamaal Charles, Kelce could slide in as Alex Smith’s favorite target. Kelce is a cheap investment that is well worth his potential reward.