Generally the easiest position for rookies to make an impact in fantasy football is at running back. While the receivers made the biggest splash last year, we know that hasn’t been a trend in the past.

This year I expect the rookie running backs to make the biggest impact. A talented crop of players, below are my five favorites to deliver value at their current draft position according to FFcalculator.com. I’ll use RotoViz’s Box Score Scout to show similar prospects.

While his price is a little high for my liking, there’s little doubt that Gordon is an elite prospect. His college production was elite and he became just the 2nd running back drafted in the first round since 2012. His similar prospects assume a bright future. 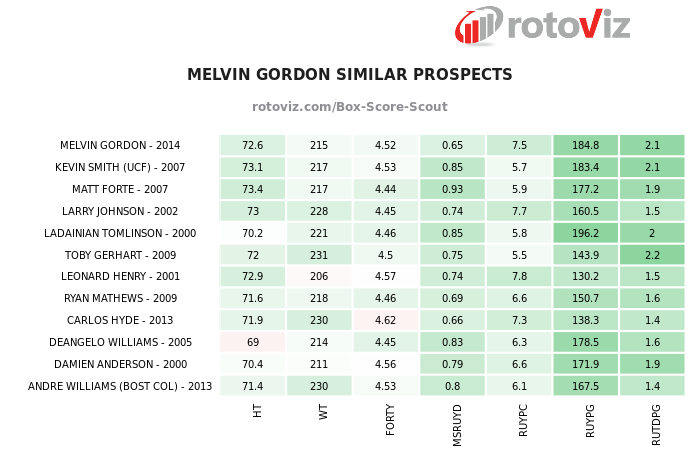 With similar prospects like Matt Forte, Larry Johnson, and LaDainian Tomlinson, Gordon could be a star for years to come. The issue for Gordon this season is providing value at RB14 while potentially losing 3rd down work to passing down specialist Danny Woodhead.

An incredible athlete, with a SPARQ score in the 98th percentile, Abdullah is poised to take the league by storm. He had promising college production and broke out at a young age. His lateral agility and jumping ability are virtually unmatched. Here’s a look at some of his similar prospects. 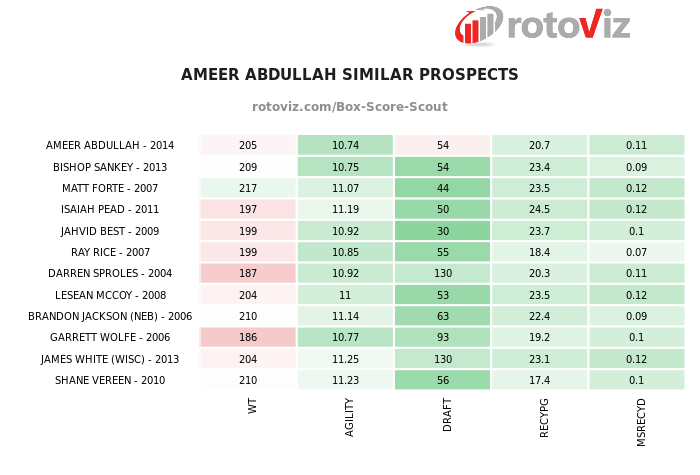 Matt Forte, Ray Rice, and LeSean McCoy are all extremely positive comparables. There’s a lot to like here and he’s still being drafted as just RB28, behind Joique Bell. Bell will be 29 years old and struggled with several lower leg injuries last season. By season’s end, I expect Abdullah to be seeing the majority of the touches in the Lions backfield. Patrick Kerrane discusses how Abdullah could be a league winner in 2015.

Those who follow my writing closely already know how much I love Coleman, as I called him a discount Melvin Gordon on RotoViz. Coleman produced at an unbelievable level in college and falls into a nice situation on a Kyle Shanahan offense with little competition. His similar prospects supply additional reason for optimism.

Duke Johnson enters the league in a favorable situation. Isaiah Crowell struggled to generate yards after contact and make tacklers miss as a rookie so the Browns selected Johnson in the 3rd round. Johnson broke out at a young age and produced at a solid rate at the University of Miami. His similar prospects are favorable.

Steven Jackson, Rashard Mendenhall, and Marshawn Lynch were all first round fantasy football picks at some point during their careers. To read why I believe Johnson will make an immediate impact, read my RotoViz article about him.

While David Johnson doesn’t have similar prospects on RotoViz (because he played Division-II), Johnson is a freak athlete. As evidenced by his Player Profiler page, below:

Not only did he dominate in college, but his SPARQ score is 94th percentile. The beat reporters at camp have already been raving about his pass-catching ability. A higher draft pick and better athlete than Andre Ellington, there are reasons to believe he could be a league-winning steal for Zero RB teams.