Rookie running backs frequently have an impact both in the NFL and fantasy leagues: Adrian Peterson, Doug Martin, and most recently Todd Gurley just to name a few. It’s common knowledge for fantasy owners that running backs are frequently injured, and this leads to increased opportunities for backups. An example of this is David Johnson last season – after injuries to Chris Johnson and Andre Ellington, he became a league winning pick.

In the first part of this two-part series, I will mention 10 rookie running backs who are likely to make an impact in 2016. I will use RotoViz’s Similar Prospects App to find comparable players.

Most fantasy owners already know about Ezekiel Elliot. The 4th overall pick in the 2016 draft, the enthusiasm for Elliot has already pushed his average draft position into the 1st round of fantasy drafts. His similar prospects assume a bright future. 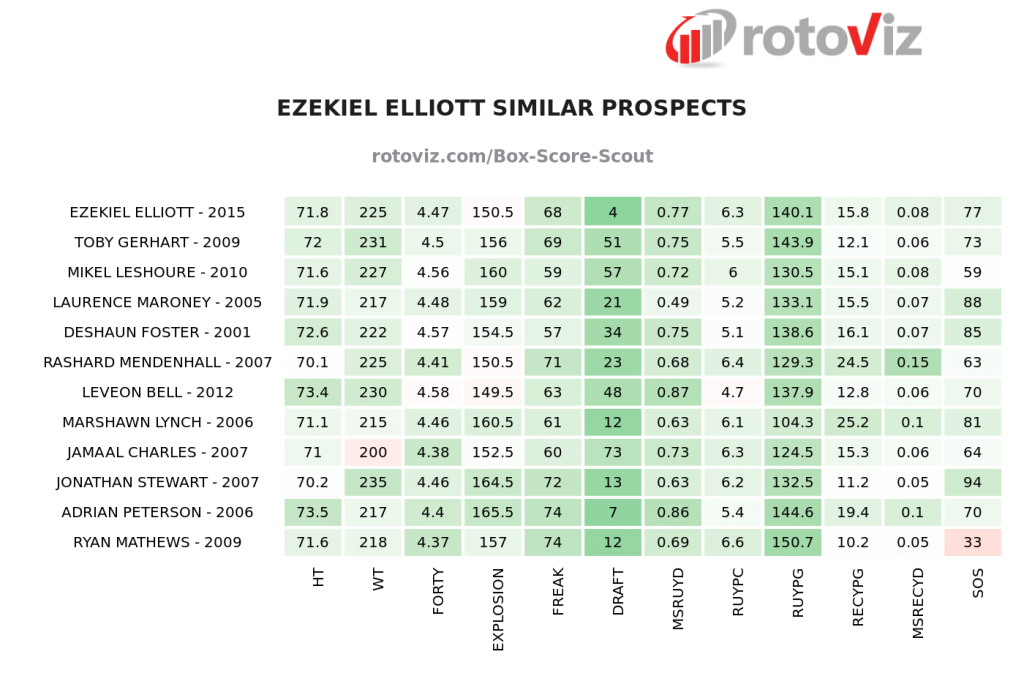 With former and current studs like Le’Veon Bell, Rashard Mendenhall, Adrian Peterson, Marshawn Lynch, and Jamaal Charles, Elliot is a special prospect. He’s an elite athlete with exceptional college production and incredible pass-blocking chops. While he’s likely to perform well behind the Cowboys’ dominant offensive line, it’s possible that the hype is already out of control.

In his own right, Derrick Henry is another impressive prospect. Selected 45th overall (second to only Ezekiel Elliot), Henry profiles as a powerful two-down workhorse. 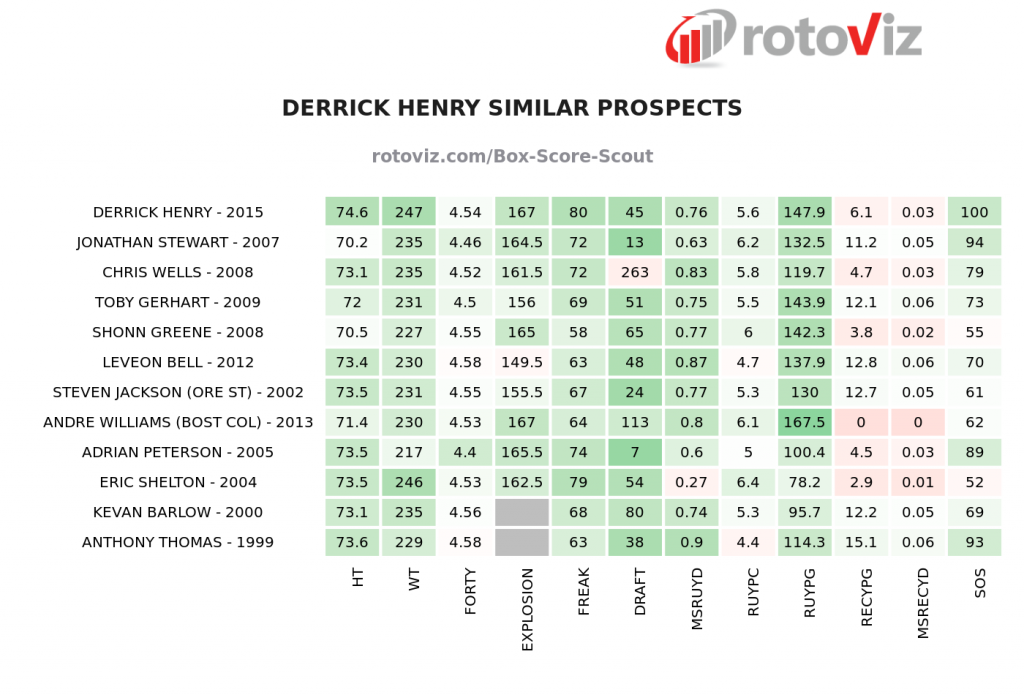 While he doesn’t add much in the pass game, Henry ran for 147.9 yards per game against difficult competition (note the strength of schedule here). He’s massive, fast, and has impressive leaping ability. The concern for Henry is his opportunity. With the addition of DeMarco Murray, it’s difficult to envision Henry receiving large workloads as a rookie. But judging by DeMarco Murray’s injury history and disastrous 2015, let’s not count Henry out as a true difference maker just yet.

Kenyan Drake is a difficult prospect to evaluate because of ambiguity. Drake is an impressive athlete but played behind starters Eddie Lacy, T.J. Yeldon, and Derrick Henry at Alabama. Serving as a change of pace option, Drake never received a heavy workload. Drake did serve as the third-down back, thus we will evaluate him as a receiver and overall athlete.

Drake is an impressive athlete and has some favorable similar prospects. It’s hard to get excited or even evaluate a player that doesn’t have a lot of college usage. On the bright side, he does have easy access to touches. As the backup to unproven Jay Ajayi, Drake could make an impact as a late-round handcuff.

One of the best athletes at running back in the entire draft, C.J. Prosise is a player that many fantasy writers are excited about. An impressive athlete with college production, Prosise checks many of the boxes for what we look for in prospects.

Not only did Prosise rush for 63 percent of Notre Dame’s rush yards but he also had 12 percent of their receiving yards. With Thomas Rawls banged up, some believe Prosise will have a chance to start for the Seahawks. Either way, he should have an immediate role as the third down back.

Another impressive athlete is Tyler Ervin from San Jose State. Ervin didn’t play against the stiffest competition but he was extremely productive.

Similar prospects like Doug Martin, Michael Turner, and Thomas Rawls show that players can be productive even if they didn’t face the toughest competition as a collegiate player. Ervin ran for 79 percent of his team’s rushing yards and was involved in the pass game. He also performed well in the 40-yard dash and jumping drills. Ervin will likely slide in as Lamar Miller’s immediate backup and will be an intriguing player if Miller misses any time.