In a two-part series, I will mention 10 rookie running backs who are likely to make an impact in 2016. I’ve used RotoViz’s Similar Prospects App to find comparable players. Here is a look at Part 1 of the series.

The Baltimore Raven running back job is up for grabs. Justin Forsett missed the last six games of 2015 and turns 31 this season (we’ve explained why he’s on the wrong side of 30), Javorius Allen filled in for Forsett but didn’t impress, rushing for 3.75 yards per carry. Many already believe that Kenneth Dixon is the team’s most talented running back. 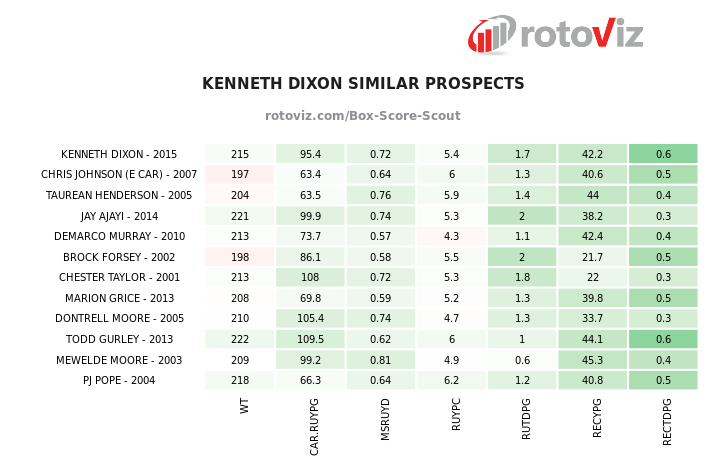 Dixon’s impressive senior season gives him some optimistic similar prospects. He has an every-down skill set that could help him have an impact during his rookie year.

After starter Latavius Murray struggled with efficiency down the stretch, the Raiders drafted DeAndre Washington. Washington isn’t the impressive athlete that Murray is but he has more college production. 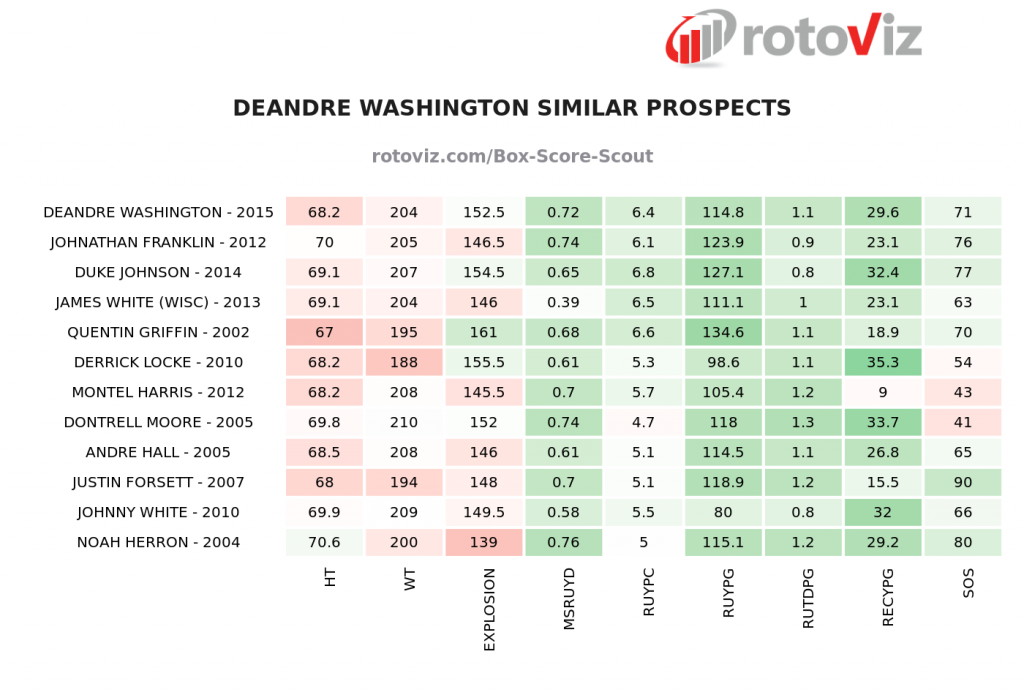 In terms of similar prospects, Washington looks a little like Duke Johnson. General Manager Reggie McKenzie called Washington “a complete back.” He’ll have a chance to carve out a significant role as a rookie. The act of drafting Washington in the first place shows how the Raiders feel about possible backup Roy Helu.

Paul Perkins doesn’t look like a dynamic athlete but he performed well at UCLA. The Giants look set with Rashad Jennings poised for early-down work, while Shane Vereen handles third-downs. We all remember the headache Giants running backs caused fantasy owners in 2015, culminating in wondering if Orleans Darkwa was the answer. From a prospect standpoint Perkins looks like a Vereen clone.

While an injury to Jennings or Vereen could give Perkins a decent role, it’s hard to get excited about his odds of significance before the season. His situation doesn’t look extremely favorable from a prospect or situation viewpoint.

There were certainly positives and negatives to Jeremy Langford’s rookie year – however it’s clear that the Bears believed it was necessary to add another running back after Matt Forte’s departure. Howard fits the mold of typical power back.

With comparable players like Jonathan Stewart, Carlos Hyde, Beanie Wells, and Le’Veon Bell, Howard will be the thunder to Langford’s lightening. The Chicago Tribune believes the team will use a “shared backfield”.

With frequently injured Ryan Mathews, DeMarco Murray departing, and 33 year-old Darren Sproles, the Eagles suddenly look thin at running back – so they selected Wendell Smallwood in the fifth round. Smallwood is an undersized back with impressive speed and agility.

Smallwood played well as a senior but there are concerns from beat writers that he’s not ready to be a three-down back because he’s a liability in pass protection. On the bright side, Smallwood has been complimented by coach Doug Pederson for his natural pass-catching ability.