Five Rookie Wide Receivers To Keep An Eye On In 2016

In fantasy football wide receivers have a history of struggling in their first season, but some rookies have had an immediate impact. For instance, Amari Cooper’s rookie campaign in 2015 and Odell Beckham Jr.’s league winning performance in 2014. Identifying which ones are set up for success and which ones to avoid is key to maximizing your drafting. Here are five rookie wide receivers you will want to keep an eye on in 2016.

Despite being a tad undersized, Corey Coleman is an elite prospect. He’s fast, explosive, and performed at an elite level in college. From a prospect standpoint, Coleman actually looks a lot like NFL star Odell Beckham Jr. 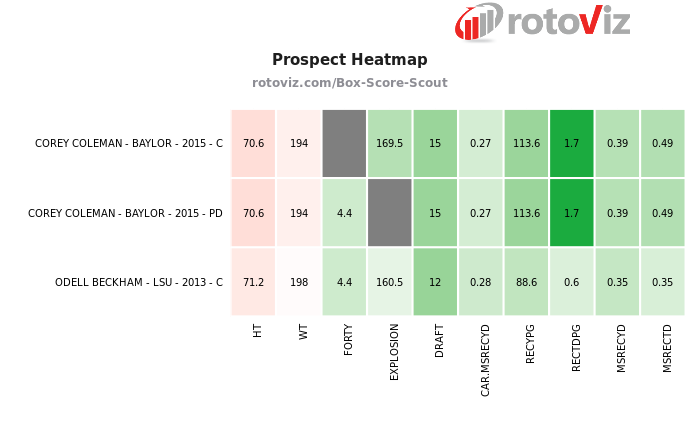 In terms of athleticism, both players are extremely similar. Beckham is a tad taller but Coleman is a better jumper. In terms of production, both players had comparable market shares of receiving yards during their college careers but Coleman was more impressive as a senior. Coleman also scored a much higher percentage of his team’s touchdowns during his senior season.

Coleman has the unique opportunity to be an elite receiver on a team that is in need of playmakers. He has very little competition for targets and is the sure number-one wideout in Cleveland. Hue Jackson has called the youngster a “tremendous player”.

Laquon Treadwell had a chance to become the first wide receiver selected in the 2016 NFL Draft, however he underwhelmed at the combine. A big wide receiver, at 6’2” 221 lbs, Treadwell has several impressive similar prospects. 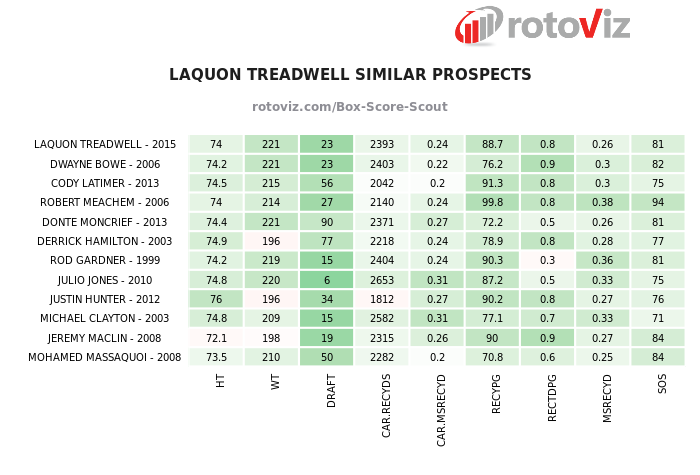 With similar prospects like Julio Jones, Jeremy Maclin, and Donte Moncrief, Treadwell is an intriguing prospect. Although his athleticism is nothing exceptional, his game tape in college shows a consistent “my ball” attitude. Treadwell was drafted by a Vikings team in need of playmakers and at worst, slides in as the second option for targets behind Stefon Diggs. Bridgewater was impressed by Treadwell at offseason workouts.

Firstly, I’m beyond excited that the Giants finally drafted a pass catcher to compliment all-world WR Odell Beckham Jr. Opposite Beckham, Sterling Shepard slides into a wonderful situation where he should see plenty favorable single coverage. Shepard also benefits from having an established quarterback, Eli Manning, targeting him.

With similar players like Emmanuel Sanders and Odell Beckham Jr., Shepard has plenty of favorable comps. On a pass-heavy offense without a lot of competition for targets, Shepard should make an immediate impact. He’s already drawing rave reviews in camp, including Odell saying, “I just feel like I really know what he’s capable of and I’d rather let him just shock the world than spill his secrets…”

With Marques Colston gone, the Saints are in need of a third option to form plus matchups in the slot behind Brandin Cooks and Willie Snead. It appears they have found their heir with Michael Thomas. From a prospect standpoint, Michael Thomas looks a lot like star Alshon Jeffery.

With extremely similar size, Jeffery has a clear advantage in the speed department. Thomas is the better jumper while both have impressive agility. In terms of production, both shared an identical market share of receiving yards in their senior seasons, but Thomas caught a higher percentage of his team’s touchdowns.

On a pass-heavy team like the Saints, Thomas could have an immediate impact in fantasy football. The New Orleans Times-Picayune already believes “fantasy owners should consider Michael Thomas in their fall drafts.”

Will Fuller was the second wide receiver selected in the 2016 NFL draft. He’s a speed demon with impressive college production. Below is a list of Fuller’s similar prospects.

Fuller stacks up favorably to arguably his two closest comparisons. Mike Wallace looks like the best athlete of the cohort but he also had the least college production. Fuller greatly out-produced both players in college against the most difficult competition and is a superior athlete to DeSean.

Another positive is Fuller joins a Texan team in need of playmakers. Behind DeAndre Hopkins, there are plenty of targets open for another playmaker to emerge, not to mention single coverage. Outside of Corey Coleman, Fuller likely has the best chance of making a splash as a rookie.