Four Early Round Value Picks at Running Back

With your early round draft picks, it is important to pick players who put your team in position to succeed reliably week in and week out. With wide receivers being selected earlier than ever, running backs have the opportunity to return a lot of value for where they are being drafted. Here are some of the early round running backs that we expect to return value in 2016:

David Johnson was a league winner in 2015 – leading all running backs in PPR scoring over the last seven weeks. Johnson led owners to championships, averaging 22.56 fantasy points per game over the last five games. Chris Johnson will be 31 this season – and father time is undefeated.

In 2015, the Cardinals scored 489 points, the Rams scored 280. Despite not being limited on talent; Todd Gurley will be fighting an uphill battle to outscore Johnson in PPR. With Le’Veon Bell suspended, Johnson is clearly fantasy’s top running back.

After finishing as RB9 in 2014 and RB6 in 2015, Lamar Miller is being drafted as the sixth running back off the board in 2016. Miller has always been held back by a small workload, receiving fewer than 11 carries seven times last season. He played very well when receiving over 10 carries. 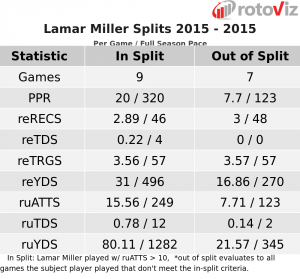 Efficiency has never been the issue for Miller. Look how he compares with Le’Veon Bell on the ground over the past two seasons.

While he’s no Le’Veon in the pass game, Miller was one of Tannehill’s most reliable targets last season.

If you aren’t interested in taking Lamar Miller, the next running back selected on average is Jamaal Charles. Since 2009, Charles is averaging a godly 5.48 yards per carry – no player comes close to matching that. Charles finished as the top running back in 2013, RB7 in 2014, and despite getting injured in 2015, he finished 2nd in points per game scoring behind just Devonta Freeman.

Since 2013, Charles has been the superior running back when compared to Adrian Peterson.

Peterson is two years older but is consistently drafted ahead of Charles.

The season-ending injury is a big concern but all signs points to Charles suiting up in Week 1. When healthy, few in history have been better than Charles.

Another undervalued running back is Mark Ingram. Coming off his best season as a pro, Ingram is currently being selected as the ninth running back off the board. He finished as RB6 in points per game last season.

For much of last season, Ingram was playing on passing downs for the Saints. As evidenced by Darren Sproles and Pierre Thomas, that role is very valuable in fantasy leagues. In just 12 games, Ingram racked up 50 receptions for 405 yards – that’s in addition to his already prominent role rushing the football.

The Saints haven’t added any additional talent at running back and I expect Ingram to maintain his passing role over C.J. Spiller and Tim Hightower.

6th round pick in a Ten team league, who’s worth that pick?