With NFL teams passing more than ever, fantasy owners are justifiably waiting longer to draft quarterbacks. There are plenty of options – even if you wait to draft your quarterback outside of the first 100 picks. Here are some value picks for those who wait to draft a quarterback.

After finishing 2013 as QB5, Philip Rivers finished as QB11 in 2014. Last year Rivers was on a tear over the first eight weeks – behind just Tom Brady in scoring – then Keenan Allen lacerated his kidney and Rivers suffered without his best pass-catcher. 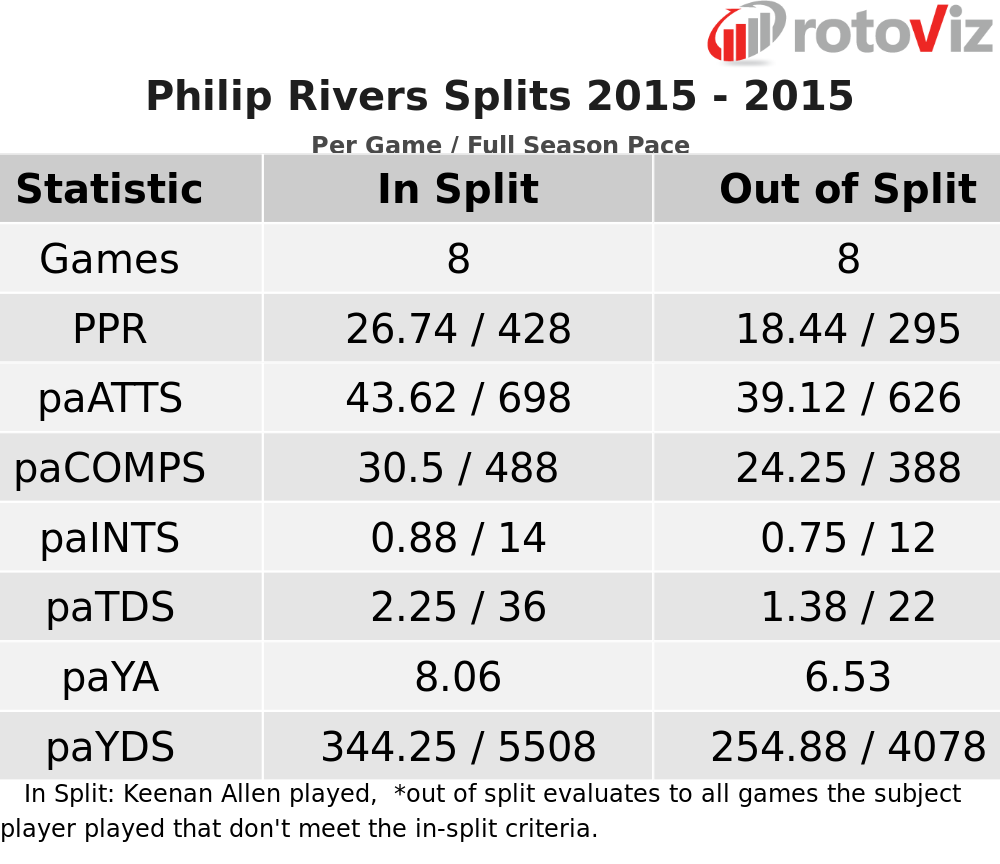 Rivers’ per game scoring dropped by over eight fantasy points per game without Allen. With no Allen and a hobbled Antonio Gates, Rivers finished as Apex’s QB12.

In 2016 with Allen returning, Gates healthy, and new addition Travis Benjamin, the Chargers have stocked Rivers with weapons. At QB11, Rivers is being drafted at his floor – he has the weapons and offensive scheme necessary to finish much higher.

After taking the fantasy community by storm in 2015, Tyrod Taylor has become the forgotten darling of 2016. Last season Taylor’s rushing made him extremely valuable. He rushed for at least 40 rushing yards in nine of his 14 games – that’s equal to an additional passing touchdown.

In points per game scoring, Taylor finished as QB8 in Apex leagues – that’s ahead of Aaron Rodgers and Ben Roethlisberger. Currently being drafted as QB16, Taylor is one of the obvious reasons to wait on quarterback.

Andy Dalton burst onto the scene in 2013 – finishing as the QB4 in Apex leagues. With higher expectations in 2014, Dalton fell to QB18. In 2015, Dalton was off to a hot start before breaking his thumb in Week 14. If we remove his injury game, Dalton averaged the sixth most points per game out of quarterbacks.

In total points, Dalton finished as QB19 in 12 games. Assuming he plays a full season, it’s extremely unlikely Dalton finishes lower than his draft position of QB19. Despite losing Marvin Jones and Mohamed Sanu, Dalton gained rookie Tyler Boyd who owners should keep an eye on this season. Dalton’s cheap price continues to make him look like a value heading into the 2016 fantasy season.

It’s clear that Ryan Fitzpatrick had by far the best season of his career in 2015 – but that’s how it goes in the NFL: get a quarterback dominant wide receivers and he’ll produce at a higher level. Despite being 36 and recovering from neck surgery, Peyton Manning had the best years of his career (and in NFL history) with Demaryius Thomas and Eric Decker. It’s not surprising that Fitzpatrick is producing more efficiently with Decker and Brandon Marshall.

This argument is simple – Marshall, Decker, and offensive coordinator Chan Gailey will ensure that Fitzpatrick finishes above QB25. I believe that even if Geno Smith was starting, he could produce as a top 25 quarterback with this opportunity.

Fitzpatrick finished as QB11 last season and although we do expect him to regress, it’s unlikely that he’ll regress that much in such a favorable situation. Essentially free, you should be excited to select Fitz as your backup quarterback.