Four Rookie Wide Receivers To Keep An Eye On

A uniquely talented wide receiver with elite college production, Amari Cooper is a player to keep an eye on. His ability combined with the opportunity to be a target monster makes him a player who could out-perform his draft position. As I outlined in a recent article, there are reasons his rookie season looks promising. 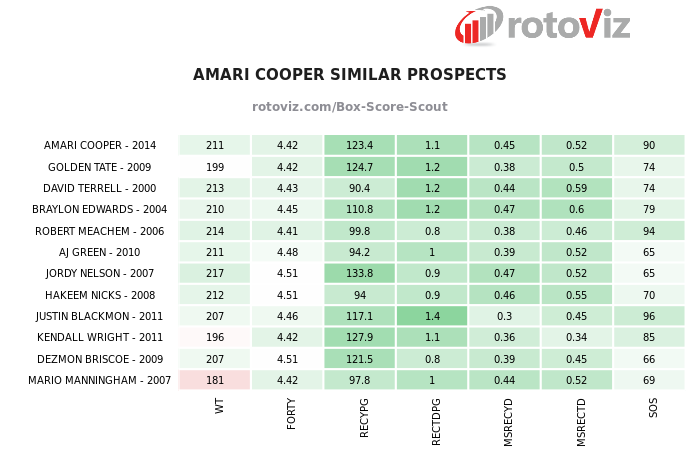 As most fantasy players know, targets are the lifeblood of fantasy wide receivers. Perriman has an opportunity to receive them in boatloads. With pass happy Marc Trestman coming to town, the Ravens have 36 year-old Steve Smith as their top wide receiver and Kamar Aiken as Perriman’s competition to start.

Currently being drafted as WR38, Perriman has the size and speed of a unique prospect. According to rotoViz’s box score scout, Julio Jones is one of his similar prospects. 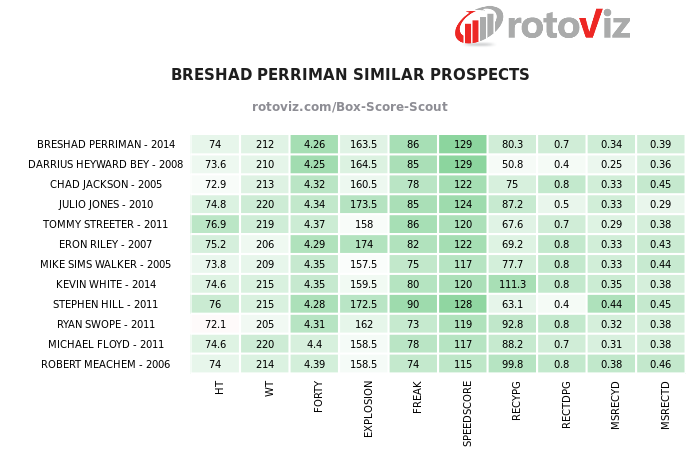 On an offense that will pass a lot and doesn’t have a lot of weapons, Perriman could be this year’s Kelvin Benjamin.

While there was some hype about Kelvin Benjamin, few are talking about Funchess. This is interesting because it appears that Funchess is the better athlete.

While Funchess struggled in the combine, he performed well in his pro-day. Even though his forty at the combine wasn’t great, he out-performed Benjamin in the jumping activities.

Funchess also had a bigger market share of his team’s production.

Funchess’ age is also very promising. Last year was his age 20 season, at 20 years old Benjamin wasn’t even playing at Florida State. Funchess’ production at such a young age is a promising sign for his future.

While Benjamin is being selected as WR16 in early MFL10 drafts, Funchess is an arbitrage play as WR59.

Not short of talent or opportunity, Nelson Agholor is an interesting player. Needing to replace Jeremy Maclin, the Eagles selected Agholor 19th overall. Maclin finished as WR9 last season and DeSean Jackson finished as WR12 in 2013 so we know Chip Kelly is capable of producing big wide receiver seasons.

With similar prospects that include Odell Beckham, Jeremy Maclin, Sammy Watkins, and Torrey Smith, it doesn’t appear that Agholor is short on talent.

Eric Moody makes a good argument as to why Agholor is this year’s top rookie wide receiver.