When preparing for your fantasy football draft, it’s always a good exercise to analyze the market for players who are undervalued. In this article, I will provide drafters with wide receivers who appear to be value picks at their current Fantasy Football Calculator ADP.

One of 10 wide receivers to top 2,700 receiving yards before turning 24, Robinson had a stunning start to his career. After a WR6 finish at just 22 years old, Allen looked destined for brilliance. But after Robinson finished as WR25 in 2016 in a very frustrating season, he tore his ACL in Week 1 of last season.

Currently being selected as WR21, Robinson joins a Bears offense that is expected to be much improved this season. A-Rob remains an athletic freak that’s performed incredibly well in terms of age-adjusted production, dating back to his college days.

Robinson is set up to receive a ton of targets from a coach who recognizes that he’s a mismatch creator. Mitchell Trubisky is already finding him in practice.

Many events have played out well for Chris Hogan this offseason. Brandin Cooks was traded to the Rams, Danny Amendola signed with the Dolphins, and then Julian Edelman was suspended for four games. Now Jordan Matthews has been placed on injured reserve.

Hogan likely didn’t need all of these events to take place in order to be a value pick. Through eight weeks last season, he was the WR10 in Apex leagues.

With Edelman suspended and the Patriots suddenly looking thin at wide receiver, Hogan is likely to start the season off hot.

Despite beginning the 2017 season with a small role, Marquise Goodwin finished as WR31. That doesn’t tell the whole story though: once Jimmy Garoppolo was acquired, Goodwin was a different player. 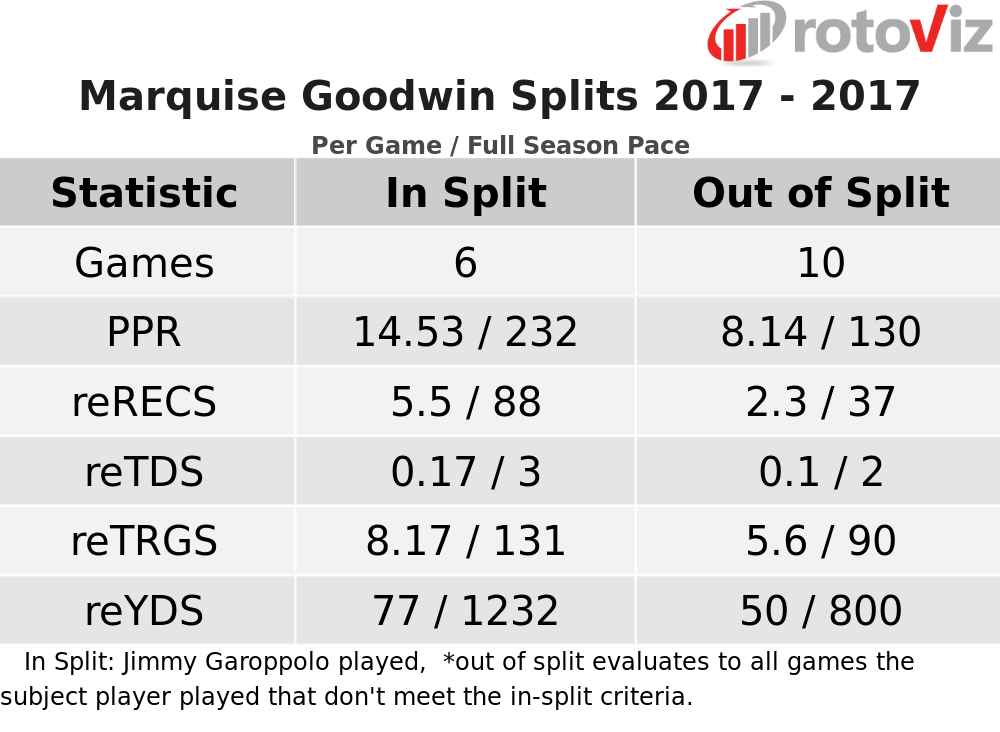 Over the last nine weeks, Goodwin finished as WR16. Right now, he’s being discounted as WR41.

The good signs for Goodwin are there. In March, the 49ers signed Goodwin to a three-year, $20.3 million extension through 2021. The San Francisco Chronicle’s Eric Branch writes Goodwin “remains the 49ers’ top wide receiver.” The San Jose Mercury News reports the Garoppolo to Goodwin connection “grows stronger by the day.”

After finishing last season as WR23, Nelson Agholor is being drafted as the 46th WR off the board. Last season there wasn’t a big difference between the production of Agholor and teammate Alshon Jeffery. For the sake of comparison, Jeffery is currently being selected as WR23 (23 receivers before Agholor).

Members of a good offense – Agholor and Jeffery will both have opportunities to produce this year. Agholor was more efficient with his opportunities last season, catching a higher percentage of his targets and averaging more yards per target.

Agholor allows you a cheap opportunity to have a receiver on a good offense. He’s also potentially the team’s best wide receiver.