Four Zero Running Back Targets for 2018

This article is intended to find the running backs for proponents of the Zero Running Back strategy. Zero RB is a strategy that involves drafting wide receivers early in PPR leagues like Apex, as it is essentially a race to the flex. Having a high scoring wide receiver at your flex position creates a weekly advantage. However, the strategy typically leaves teams with RB2 as their weakest starting position as they don’t typically draft more than one RB in the first 6-7 rounds.

After looking fantastic during last year’s preseason, Tarik Cohen came out with a bang – averaging 18.1 PPR points per game over the Bears’ first three regular season games. Cohen’s workload waned after the first three games, but John Fox’s offense isn’t a great place for anyone to succeed. Cohen, however, was more efficient than Jordan Howard and provided a spark to the Bears offense.

We’ve written extensively about how the Bears are likely to be much better on offense this season. New head coach Mark Nagy has vowed to play faster and more innovative – focusing on creating mismatches. Nagy’s system fits Cohen’s skill-set excellently.

Nagy has drawn similarities between Cohen and Tyreek Hill, explained how he would use Cohen all over the formation and said he will have some fun utilizing Cohen. It’s showing in Bears’ practices.

If the Bears feature Cohen through the air in a Darren Sproles-like role, he’ll be a great value this season. Calling plays like the designed screen above show the coaching staff’s intention of involving Cohen and getting him in the open field, where he can make splash players.

No running back was targeted at a higher rate per route last season than Tarik Cohen (35.9 percent of his routes). With the Bears playing faster, notching more total plays on offense, and Nagy’s love for Cohen, he’s very likely to improve on last year’s 360 snaps

In 2017, the Falcons continued to use Devonta Freeman and Tevin Coleman as 1A and 1B. Both players are similar in terms of efficiency but play in an offense that targets running backs and gets to the goal-line.

Over the past two years, even with Freeman healthy, Coleman has been productive. 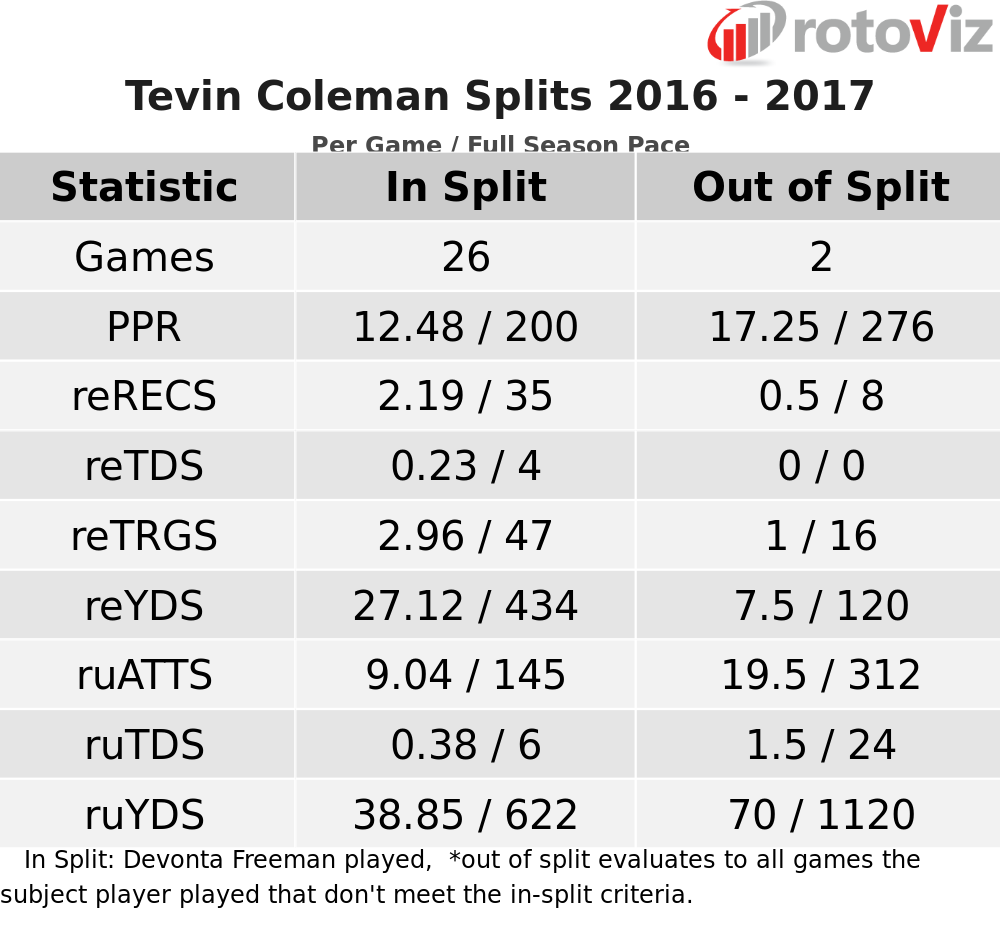 Coleman combines two essential elements for Zero RB candidates: a floor and a ceiling. Scoring 12.48 fantasy points per game with Freeman healthy over the past two seasons, Coleman has shown a floor that allows you to plug him in as a weekly RB2. In the event that Freeman gets hurt, Coleman provides elite league-winning upside.

Rex Burkhead was quietly impressive last season. When healthy, he was the Patriots’ highest scoring running back per game.

The Patriots drafted intriguing rookie running back Sony Michel – who is an impressive prospect, but we can’t yet assume that he’ll take all of Dion Lewis’ vacated touches. It’s also clear that the Patriots liked Burkhead in the red-zone, as he averaged 0.8 touchdowns per game on fewer than 10 touches.

James White isn’t a threat to take Lewis’ carries and drafters, based on ADP, are assuming that Michel will take most of Lewis’ workload. If Burkhead maintains his current market share and red-zone involvement, he’ll likely be a value pick – but there’s certainly an opportunity for more.

Despite receiving the fewest rushing attempts per game, Jones was the Packers’ most efficient running back on the ground.

Ty Montgomery looks likely to control passing downs and is an interesting Zero RB candidate himself, but the Packers look ready to use one of their younger backs on early-downs. This assumption is made based on Montgomery’s rushing struggles (3.8 yards per carry) and late-season workload (not receiving more than six carries after Week 6).

Although Jamaal Williams was selected higher in the 2017 NFL Draft, he’s inferior to Jones by nearly every analytic measure.

In terms of athleticism, Jones is faster, jumps higher, and is more agile. In terms of college production, Jones had a higher dominator rating, ran for more yards per carry, and was targeted more through the air.

In case you’ve forgotten, look how good Jones looked in his rookie season.

If you believe that Jones is the superior back, like I do, the two-game suspension provides a nice discount for a player that shouldn’t be available in the 9th round.