Going RB-RB To Start Your Draft: Part I

Although going Zero RB, or at least WR-WR to start your draft is incredibly popular, there are times where the draft simply doesn’t fall your way. If you draft enough times, it will happen to you at least once: You have a late first-round pick, and the only wide receivers available are the Jordy Nelson/Alshon Jeffrey/Mike Evans tier. However, you notice that a run on wideouts has left valuable running backs on the board. How should you proceed?

Round One: David Johnson

Our very own Mike Braude wrote an article back in June about how David Johnson should be the top running back off the board, and that was before Le’Veon Bell’s suspension. In the late first round, an uber talented running back on a top-tier offense shouldn’t be available. Take a look at his splits from Week Eleven and on, the first time he got 8+ carries and became the bell-cow: 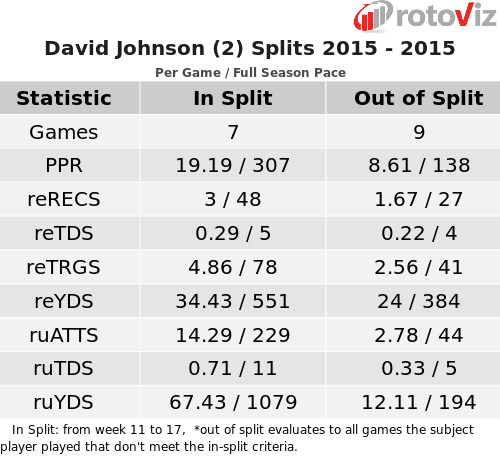 After Keenan Allen goes at the turn, you could feel that passing up another bell-cow who catches passes is too difficult. He is worthy of late first round consideration and is a running back to target early.

On a team that rode Arian Foster into the ground, they didn’t sign Lamar Miller in free agency to let him split time with Alfred Blue. Miller has seen over 200 carries just once (216 in 2014), and he should see many more this season. The Texans play fast and finished fifth in the NFL in rush attempts last season. Miller hasn’t seen big workloads but he’s frequently been one of the league’s most efficient back.

If he can be a top-10 RB while having mid-RB2 touches, imagine if he were to receive massive workloads.

You’ve started RB-RB, and now you definitely need a wide receiver. But how are you going to compete with the guys who started off with Odell Beckham, Brandin Cooks and TY Hilton? You need a guy at mid-WR2 price with WR1 opportunity. The best bet for that late in the third round is Golden Tate.

I’ve covered why Golden Tate is already a steal, and I think he’s the highest upside guy here. One may worry about the signing of Anquan Boldin, but an unseen plus to his arrival:

Obviously Jimmy Graham (patellar tendon) and Calvin Johnson (retired) aren’t compelling fantasy options this year, but everyone else on that list consistently goes in the top two rounds.