As we discussed in the previous article, sometimes the draft doesn’t fall according to your plans to go WR-WR, and there’s too much value in a David Johnson-Lamar Miller start to pass up for some people. After selecting Golden Tate and Eric Decker in the 3rd and 4th round, let’s see what rounds 5-8 hold for us. Click here to see part one of the article.

Lockett was a favorite of many draft darlings last season as the undersized-yet-explosive Kansas St. product was scooped up by the Seahawks in the 3rd round. But we didn’t need to see much analytics to see that Lockett is a player with elite game speed.

Pete Carroll has already said Lockett is a starter they are game-planning for, and it isn’t out the realm of possibility that Russell Wilson is the top fantasy QB by the end of the year. Take a look at Russell Wilson’s pass attempts each year he’s been in the league:

It’s becoming increasingly clear that the Dolphins are not content with Jay Ajayi, as they drafted Kenyan Drake early and had been linked to Arian Foster for weeks before they ended up signing him.

Several players have proven capable of coming back from Achilles injuries, while Foster’s conditioning has been a plus. Meanwhile, beat writers are sensing that Foster is going to be “the guy” as Ajayi rehabs from yet another injury. Every time Foster has been on the field, he’s been a difference-maker, and will be a plus PPR RB as long as he’s playing.

From being an afterthought in San Francisco to 2015 where he led all tight ends in catches, targets, third in yards and finished as the TE3 – Walker has come a long way in his career. While it’s unlikely he will lead the league in targets, it’s reasonable to think he could lead all tight ends in targets again.

With Kendall Wright hurt, Dorial Green-Beckham ineffective, Justin Hunter a bust, Andre Johnson old, and a relatively unproven Rishard Matthews, Walker is going to lead the Titans’ passing game again. Because WR won’t be an advantage on our fantasy team because we started RB-RB, Walker will make TE a strength. Take a look at where Mariota was most successful last year: 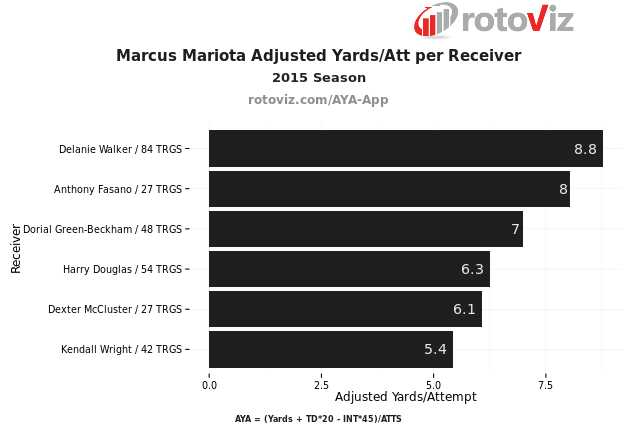 I have a feeling Diggs’ ADP is going to start getting out of hand. He’s already Shawn Siegele’s top breakout wide receiver, and he made plays as a rookie that are tough to ignore.

A former top high school recruit, he struggled with injuries and ineffective quarterback play at Maryland. But last year, he flashed game-breaking potential. Mike Zimmer has already moved his position from X to Z in order to get him off the line of scrimmage for easier releases and in the slot more. He is going to lead the Vikings in receiving this year (health permitting) and is the perfect WR4 for this well-balanced team.