Hey everyone, my name is Jeremy and some of you may follow my brother Dalton and some of the amazing content that he has put out over the past year or so. This is my first article, where we will be looking at how wide receivers tend to have their value change with respect to age and draft capital.

This article is similar to the one that I wrote with Dalton about running backs. Be sure to check out Why You’re Not Selling Running Backs Early Enough in Dynasty.

It’s also important to note that this article is especially relevant this year, with the 2021 wide receiver class being one of the best classes in terms of prospects over the last 15 years. Obviously, last year’s class was very strong as well as the loaded 2014 class, but this wide receiver class has the potential to be just as good as both of those classes.

While the ability of a player doesn’t necessarily change depending on where they are drafted, we can easily see the relationship between draft capital and player success. Teams that invest a lot of draft capital into a player will likely give that player more opportunities to showcase their talent, not to mention the fact that the top prospects are typically drafted higher. Since most of the relevant wide receivers drafted in fantasy are Day 1 or 2 prospects, we will be analyzing wide receivers drafted in the first three rounds.

The data includes all wide receivers drafted in the first three rounds to play in a game since 2000. If a player started their career before 2000, then only the data after their 2000 season was accounted for.

Understanding when wide receivers play in the NFL and when they tend to decline is important to determine exactly when is the best time to sell them in dynasty. This allows the owner to maximize their value for a player by selling them at a high price. 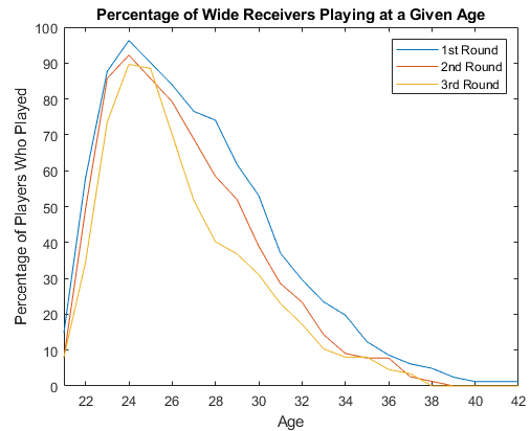 The graph illustrates that players are most likely to be in the NFL at age 24. After that point, there is a significant drop-off which is more rapid for players with lower draft capital. To put it simply, the prospects with better draft capital have longer careers in the NFL. 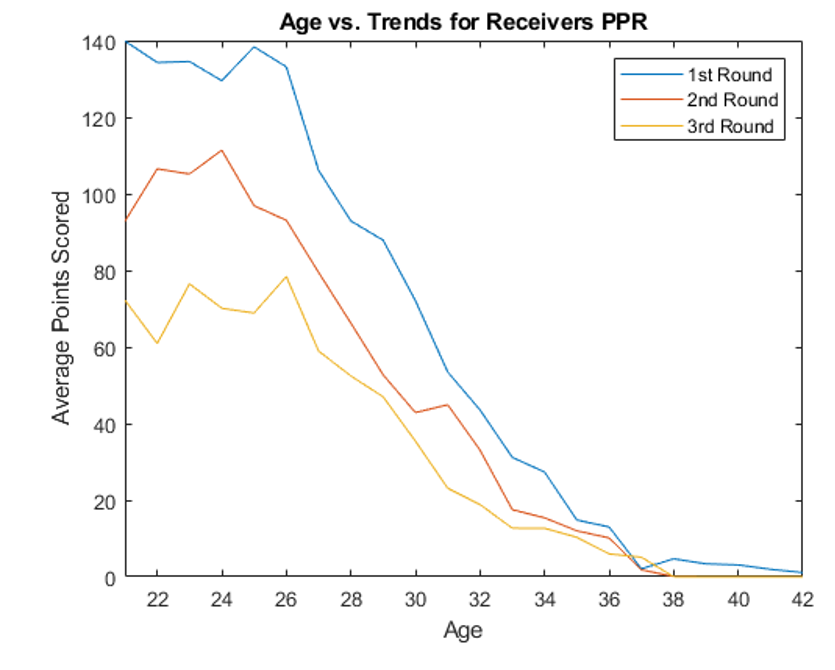 Here we simply see the average yearly points scored by age. It is interesting to note that age 21 receivers drafted in the first round score more than any other age cohort. This is likely because age 21 receivers are typically the best prospects and have the most upside. While they likely get better with age, they will also be mixed in with other prospects that aren’t as talented, which likely brings down the average slightly.

Here we can see the Value Over Replacement by age based on league size. In 12-team leagues, the average first-round receiver doesn’t even net any value over replacement at any point in their career. The key takeaway of this is that the deeper the league, the longer you should wait to sell a wide receiver.

In a 12-team league, every year that you hold a receiver, he loses lifetime value, but for 16-team leagues, they gain value until about their age-27 season if they were drafted in the first round.

If we compare this to running backs from Dalton’s article that I mentioned earlier, we can tell that investing in unproven wide receivers may be a bit riskier than for running backs.

If we want to find a group of players that are undervalued in dynasty leagues, look for players that have proven production at a very young age. Age-21 rookie wide receivers with strong profiles and Round 1 draft capital are ideal candidates.

2021 Rookies with Potential Round 1 draft capital

While these players are going to be some of the most productive receivers in the NFL, a couple of years from now their production will dip and they will be tough to sell for any value.

Chase young receivers with proven production and prospects with strong profiles and early draft capital. The earlier you invest in a receiver’s career, the longer you have them before they start to dip in production, so be aggressive when you feel good about a young player.

Hit receivers in the 2021 class hard! This is one of the most talented classes for receivers in a long time, with a class of 10-12 solid-to-great prospects. This is also the cheapest that these receivers will be in their careers if they do hit. This isn’t a particularly strong running back class either, which is even more reason to go receiver heavy.

I hope you all learned something from this article, so you can dominate your leagues and maximize the value of your teams. Shoutout to my brother, as he is one of the smartest fantasy football analysts that I know and his insight definitely gave me a huge head start getting into dynasty leagues. Be sure to follow him on Twitter @DaltonGuruFF. If you liked this article and want to learn more, follow my Twitter @jeremy_kates.