After Part 1 and Part 2 of the rookie yards per target (YPT) study, we can see how important rookie seasons are for determining future NFL success.

We found the ideal rookie season required a player to have over eight YPT, at least 80 targets, and weigh at least 210 lbs.

Knowing that the hit rate is smaller for these players under 210 lbs., I wanted to examine those players. By studying them, we can find potentially actionable similarities that were consistent throughout the successful players.

To begin, include all rookies under 210 lbs., with at least 60 targets, and eight YPT. Let’s see what this qualifying group looks like. 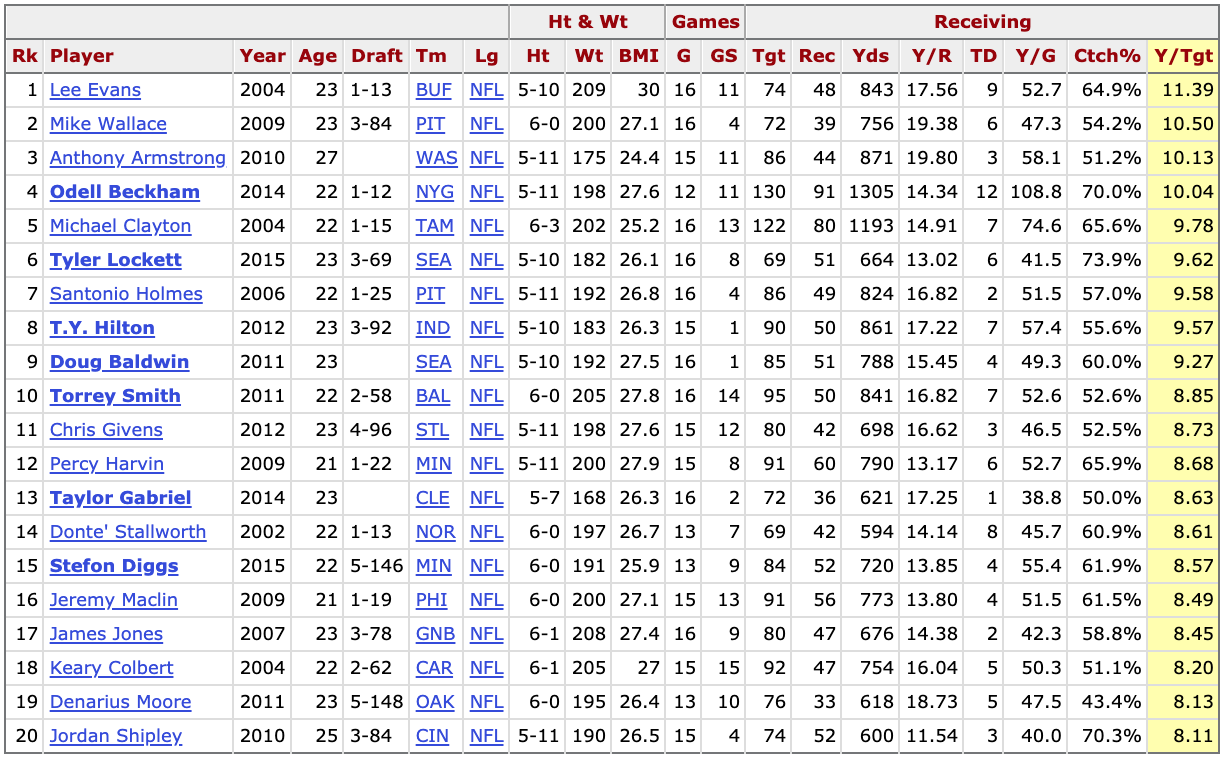 Not as promising as our other lists, but it’s littered with talented players who had productive careers. What now happens if we use a couple of our previous thresholds to potentially get a better hit rate?

Filtering for Age and Volume

Let’s restrict the age group of these rookies to 23 years old or younger and bump up the targets to 80. Below is what remains.

Getting better, but how can we increase this hit rate just a bit more? Being a smaller NFL receiver likely increases the value of speed. What if we filter this to all players who ran under a 4.55 (the average 40 time for WRs) at the combine (or pro day)?

While this is a small sample size, we can see that underweight WRs who are slower than average are likely worse bets to have sustained success in the future.

Even our close misses, outside of Chris Givens, still had very productive NFL and fantasy careers. While the end list is smaller than our heavier cohort, this clearly shows that undersized players can certainly thrive in the NFL and have productive careers. Heavier players likely carry more upside, as Odell is the only player to have three or more WR1 seasons, and are also safer in terms of hit rate.

Let’s see which players in the last four draft classes will be added to this cohort.

Unfortunately, no players qualified for the thresholds above in their rookie year since Stefon Diggs in 2015. To create a group, we can remove the height and age requirements and lower the target minimum back to 60.

It should be noted that Kupp, Cole, Rogers, and Renfrow all ran slower than a 4.55 at the combine. Kupp has proven to be a stud but is likely an outlier, given that he weighs under 210 lbs and is slow. Remember Kupp is very close to hitting the perfect threshold, missing it by just a couple pounds. Out of all of these players, Kupp had the most targets, was the most efficient, and also weighed the heaviest. He looks poised to be a target next year again as he looks to join the exclusive ranks of multiple WR1 finishes under 210 lbs.

Keelan Cole and Eli Rogers lack of success after their rookie seasons could be due to their lack of speed. Cole had a promising rookie year but has seen his targets diminish the past two years. Buried deep on the depth chart, he’s a long shot to hit due to his age.

Eli Rogers is out of the league now so he’s all but failed to hit. Note that the two big misses on this list were both undrafted 24-year-old rookies who ran over a 4.55 40-yard dash. Players who fall in that category are extremely unlikely to hit from the outset.

Calvin Ridley is a year older than we would have liked but remains a very promising player. After an impressive rookie year, he was even better as a sophomore. Ridley had an outside shot of becoming a WR1 this year had he played in the last three games. He’s been efficient and productive in his first two seasons which led to him hitting 195 PPR points in both campaigns. Ridley is someone on this list that is intriguing heading into next year.

I touched on Darius Slayton in Part 1 of the study. He was the closest player in this group to hit the final cohort – topping 80 targets in his age-22 rookie season. Again, he’s someone to keep an eye on as an underrated player heading into Year 2.

Had Christian Kirk stayed healthy his rookie year, he would have certainly made the promising last group. He is the heaviest in this group and saw some promising volume in Year 2 as he had over eight targets per game (16th in the league). With a second season to develop a rapport with Kyler Murray, Kirk has a good chance to become a hit in this group.

Hunter Renfrow played well last year as a rookie and ended up barely qualifying for the eight YPT threshold with a couple of big games to end the season. How to approach Renfrow in 2020 likely depends on price. If he’s expensive, he is likely someone to be wary of considering he is underweight, old, and slow.

Marquise Brown is an intriguing player who should be locked and loaded as the Ravens top wide receiver next year. His ceiling may be limited due to the overall passing volume of the team, but we saw what he can do when given the opportunity with a 7-126 game in the playoffs. Brown is worth drafting in the 6th to 8th round next year as he enters his second season in the league.

I wrote this piece with a focus on how successful wide receivers under 210 lbs. can be. I am interested in how the weight variable will impact the consensus top two incoming rookie receivers CeeDee Lamb and Jerry Jeudy. Both are projected to be first-round selections, but both are also expected to weigh under 210 lbs. at the combine. I’ll be doing more draft profiles as we get closer to the draft.

Thank you for reading, it’s greatly appreciated. If you would like to connect or just want to be spammed with an abundance of A.J. Brown tweets then follow me on Twitter @DaltonGuruFF.

Again, thanks to Pro Football Reference for their awesome tools that make this possible. And also, a thank you to @BraudeM for the idea to dive into this research.