How To Value Rookies in Startup Dynasty Drafts

I will be participating in a couple upcoming startup drafts this week, so I have been furiously researching dynasty pick value. To help you, I’ll share the fruits of my labor.

One of my favorite tactics is trading my startup picks to acquire future rookie picks. Then the important question hit me: how much is a future first-round pick (or any other rookie pick) really worth and what is its equivalent in startup draft? Obviously, the range could fall all over but I wanted to find out on average what kind of value I could expect back.

I started digging into the past four years of start-up drafts (2014-2017) to see exactly where rookies were being drafted without ever taking a snap on the field. I then split each year into two categories: the average draft position (ADP) of rookies during the month of May and the ADP during the month of August.

I wanted to see the difference in values as the market tends to correct itself leading up to the season. The 1.01 refers to the first rookie selected in startup ADP, the 1.02 is the second rookie selected and so on. Provided by RotoViz, the results are shown in the graph below: 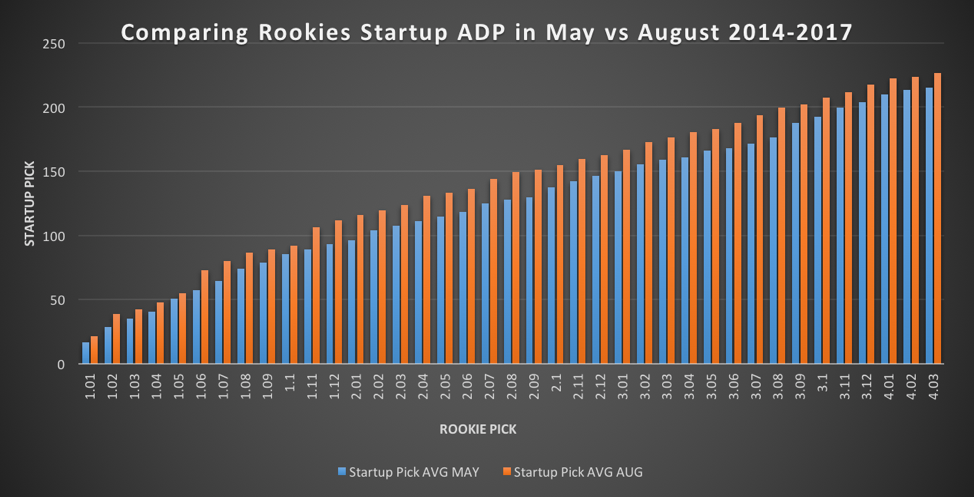 The actual numbers for each pick are listed below:

As we can see here there is a premium on rookies immediately after the draft. Across the board, rookies are worth significantly less in August. The top five rookies tend to not lose as much value between May and August, but after that, there is a strong drop-off.

The major takeaway is that all rookies lose value between the draft and their first NFL snap. This amounts to a 12 percent decrease in the value of rookies from May to August.

This presents a good opportunity to sell rookie picks prior to August. The chart can help us get an understanding of how we should value a rookie pick to player trades. It’s likely best to use the August ADP as the true determinate of the value of each pick. This gives us a clear guideline of whether it is good value in a trade including a rookie pick simply based on the ADP of the player we are acquiring.

Now if we are talking about acquiring future picks it gets a little tricky without knowing what pick it is going to be. We are essentially playing the lottery if we trade for a future pick as it has a wide range of outcomes, but if we play the averages the picks would be in general worth the following.

The chart above gives you insight as to what players you can expect to get back for a rookie draft pick. If you end up getting an offer that includes a player that exceeds the ADP of that pick, you should be getting good value in return.

Based on these results it would make sense to trade away your late first round picks for a future first. Hopefully the pick you trade for has a good chance of falling inside the top six. If you can get the other owner to throw in an extra piece, it’s all gravy.

In that case, you would be gaining value on the additional piece in the trade and have the opportunity to gain a lot more value depending on where that pick lands. At worst, you’re getting a similar pick in next year’s draft.

Let me note that this is just a guideline for finding similar value in trades including rookie picks. Each trade and player are unique, and you never know who the next Alvin Kamara will be. In addition, some draft classes are more valuable than others and will have better players available in the backend of the draft.

This 2018 draft class looks loaded at the top with running backs so the middle first-round picks will likely be more valuable than the average draft. This article will help you understand the proper value of these picks when making trades in dynasty.

Pre-Draft Dynasty Rookie Rankings
What Are the Fantasy Experts Saying About the 2021…
The Making of a Dynasty Champion: Part 1