How To Win Your 2022 Fantasy Football League

This is the most common mistake fantasy owners make. Drafting purely by statistical projection leaves absolutely zero room for error or huge upside, which is never a winning fantasy football strategy. Instead, consider some of the following questions:

Nick Chubb is a good example of this phenomenon gone wrong. Chubb was drafted as the RB11 last year and finished as the RB13 (and RB12 by PPG), so surely if he essentially met his early ADP his fantasy teams would have a decently above-average win rate, right? 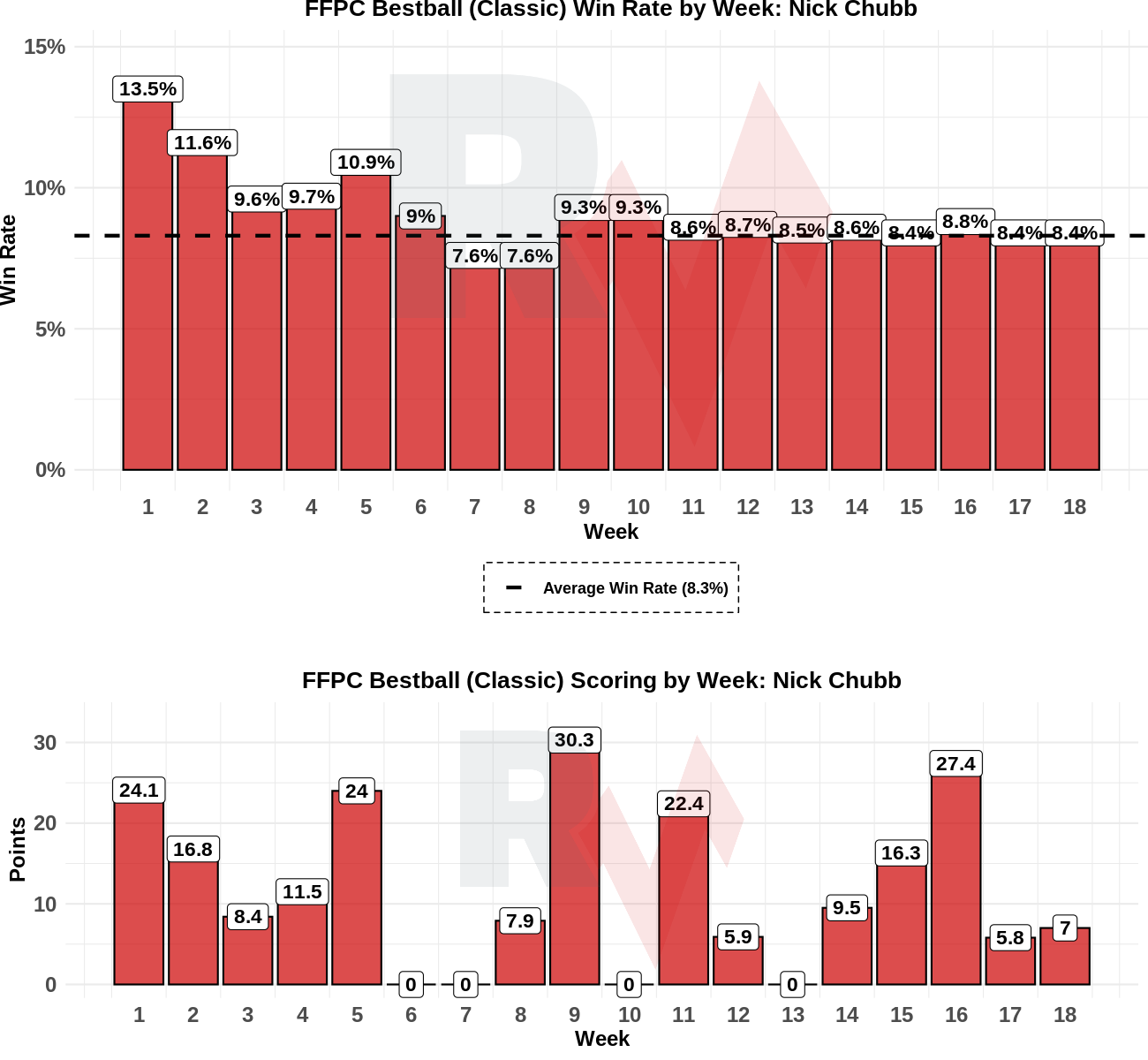 It should have been a ceiling season for Chubb, who was running for much of the season without pesky RB2 Kareem Hunt behind an elite offensive line with running game guru Kevin Stefanski calling the shots. But even in the best of scenarios, he didn’t make much of a difference despite meeting ADP.

Why? Because unless there’s unpredictable touchdown luck or absolutely massive workloads, Chubb simply doesn’t have the receiving ceiling to compete with the truly difference-making fantasy running backs (even without Hunt):

Hunt is almost surely back while they just signed stud RB3 D’Ernest Johnson to a 1-year deal, who was absolutely awesome last year:

the analytics say d'ernest johnson (fourth in yards after contact, fifth in broken tackle rate, second in evasion rate) might be really good

On the other hand, thinking about the range of outcomes makes players like Kyle Pitts – an unprecedented talent who is as cheap as Chubb, much more exhilarating:

Kyle Pitts was in a league of his own among rookie tight ends in recent history. 🚀🚀🚀 pic.twitter.com/nHecyMMJmb

As a general rule, target players who check multiple of the following bullet points:

Editor’s note: Looking to win cash playing fantasy football? You’re in the right place! Apex Fantasy Leagues is the best place to play football for money with multiple different formats and price points. Take a look at our lobby to see which leagues interest you!

2. Adjust Your Draft Strategy To Your League Settings

Following one set of rankings for all different league types is a recipe for under-optimized, poor performance. Obviously, 2QB leagues have drastically different rankings than the classic 1QB format, but what about a league that starts 2 WRs instead of 3, or leagues that are 0.5 PPR instead of full-point PPR?

For example, let’s assume your home league starts 1QB/2RB/2WR/1TE/1FLEX. Grabbing an early-round TE becomes even more important here as you have fewer opportunities to gain a point advantage on the other teams in your league. On the other hand, if you start 3+ WRs and/or 2+ FLEX positions, you have more chances to build around WRs in order to make up points against the teams who drafted Travis Kelce, Mark Andrews, or Kyle Pitts.

Each fantasy league is its own market, and markets are determined by supply and demand. During fantasy drafts, nothing has more impact on this than the league settings.

3. Zig When Everyone Else Zags

Inevitably during fantasy drafts, there are “runs” on a certain position. For example, you may see 8+ RBs go off the board in a row in your draft, or there could be a rush on the last of the good wide receivers as the 6th round draws to a close.

This may elicit some instinctual panic, but it can actually be a blessing in disguise. Instead of trying to chase points by keeping up with your opponent, take the major value at other positions. If you see a “run” on players at a certain position, don’t feel like you have to chase that position, there are likely some values at other positions that need to be taken advantage of.

4. Be The Last Player To Draft a K or DEF… or Don’t Draft One At All

This is a universal mistake that occurs in nearly every fantasy league. Not only is ranking fantasy defenses nearly impossible due to the unpredictable year-to-year performance and volatility of defensive TDs, but you’re probably better off simply playing week-to-week matchups anyway.

If you’re hellbent on coming out of your draft with a full roster, be sure you’re the last one to take a K and DEF and ensure they’re players you’ll start in Week 1.

But otherwise, eschew the position altogether on draft day and load up on “lottery tickets”: players who stand to benefit from a training camp/preseason injury or a team’s transaction.

Think about how much better your teams would’ve been if you took a stab at Dalton Schultz in the final few rounds instead of reaching for the top defense, or if you took Hunter Renfrow or Amon-Ra St. Brown over your preferred kicker.

The odds are certainly low you’ll hit on these picks, but it increases your chances of finding a league-winning player at basically zero opportunity cost.

5. You Can Wait On QB…But Not Too Long

If we look at 2021 Win Rates from our friends at RotoViz we see that only two of the top-40 players by win rate were quarterbacks… but there were seven quarterbacks in the 41-80 range.

Indeed, the results are more staggering when looking at the Points Above Average metric. Take a look at what our own Mike Braude found in his most recent quarterback analysis:

“In my 2021 Fantasy MVPs article, I used PAA (Points Above Average) to find which players are provided the most value for fantasy owners. For the season, Josh Allen provided the 12th most value over the baseline average for the QB position. Allen, Justin Herbert, and Tom Brady all finished in the Top 19. Obviously not missing games helps, but it’s become difficult to compete in fantasy leagues without a solid QB. Even if we measure the points above average by game, all three finished in the Top 29…”

Teams that waited too long last year at quarterback and had to rely on one of the disappointing rookies (Trevor Lawrence, Justin Fields, Trey Lance), Cam Newton, Ryan Tannehill, or Matt Ryan really gave away points at the position.

The fantasy football market has begun to adjust and become efficient at predicting quarterback ADP. As a result, it has become difficult to wait too long on QB and still be successful.

In order to maximize our upside, we should target quarterbacks who have elite rushing upside built into their range of outcomes.

A helpful way to think of a fantasy matchup is by considering it a series of head-to-head positional matchups. Once you think in this way, you’ll notice a problem: you have absolutely no way to compete with the Jonathan Taylor’s and Christian McCaffrey’s of the world if you don’t have a top-3 selection. By taking RBs after the elite tier (like Nick Chubb before the 3rd round), all you’re doing is trying to play “catch up” with the teams lucky enough to land the few (or lone) truly transcendent RBs. This is a losing strategy.

Instead, consider taking an early tight end – especially when there’s a run at other positions (see number 3). Look how much of a weekly advantage you received if you drafted one of the top-two tight ends by 2022’s ADP (credit to Nathan Jahnke of PFF): 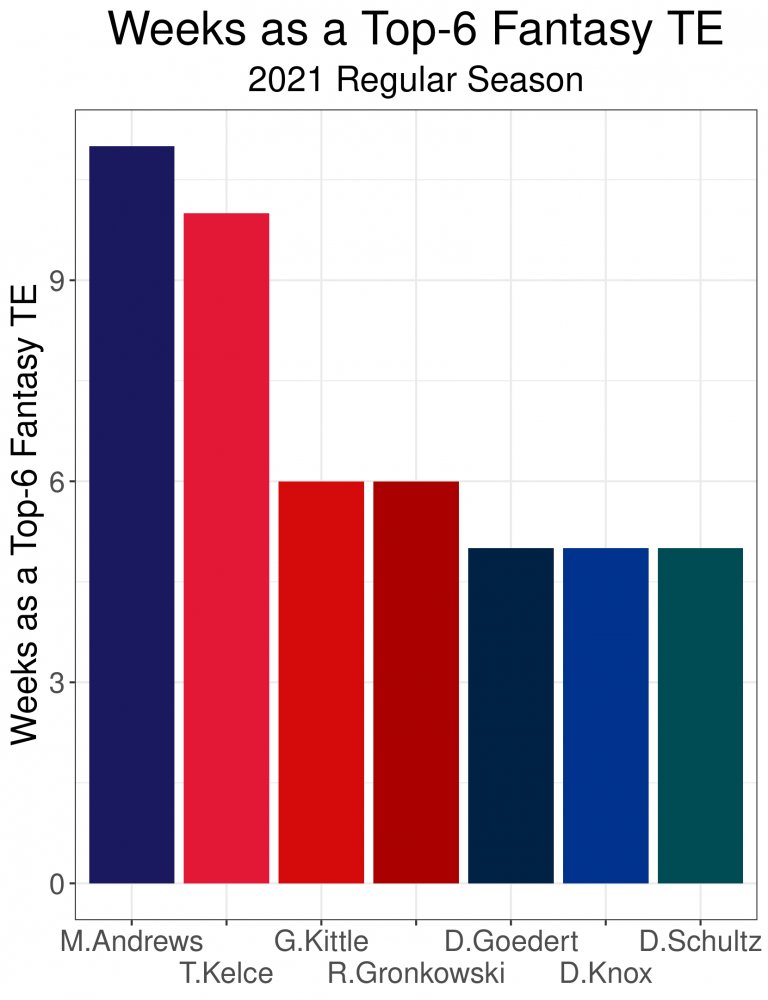 By pursuing a positional advantage at TE, you’ll have the ability to compete with the players who luck into the league-winning RBs and WRs regardless of your draft position. Look at the 2021 PAA (points above average) metrics, and you’ll see two tight ends in the top 10:

As you do mock drafts and explore ADP, you’ll notice that the wide receiver position seems to run dry quicker than usual. It isn’t your imagination: in 2021, there were roughly 16 wide receivers going within the first four rounds of drafts – that number is up to 20 for 2022. With a 25% increase in the number of receivers going in the first 48 selections, we need to find a few bargains outside of the fourth round.

Luckily, we are able to draft second-year wide receivers – a dependable, league-winning trend – outside the top 50 selections this season (their lighter weights are not a big issue, despite what you may have heard in the past):

Remember: only one team wins! Taking only safe, reliable high-floor players may help foster an above-average finish in your league but beating out 11 other teams takes more than a team of steady players who score 12 PPR points per game.

Fantasy leagues are won by having multiple players that significantly outperform ADP. Think about the difference between taking Mark Andrews in 2021 instead of Chris Carson or taking Adam Thielen over Ja’Marr Chase. The “sure things” (if such a thing exists in fantasy football) are always going to cost a lot of draft capital, so focus on players with upside whose risk is at least partially baked into their cost.