There’s a lot to like about Allen Robinson. He looks like the breakout WR in 2015. With his college production, athletic profile, and early NFL career, his near-future looks exceedingly bright.

Sophomore wide receivers Kelvin Benjamin and Martavis Bryant are both being drafted ahead of Allen Robinson. Let’s see how their college production stacks up: 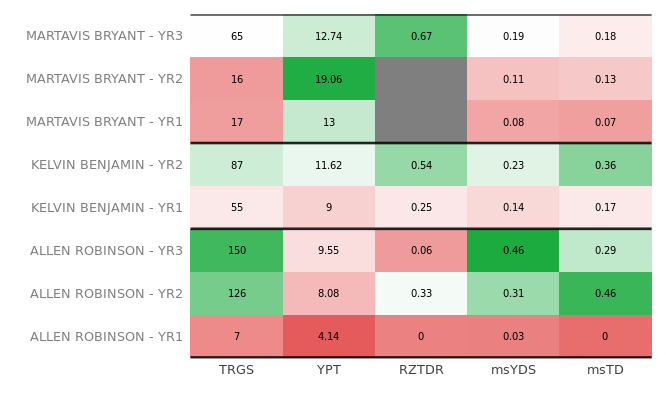 While both Benjamin and Bryant had better yards per target in their senior seasons, Allen Robinson had more targets in his senior year than either had in their entire college careers.

Robinson was clearly the best player on his passing offense as he saw 46% of the passing yard market share in his senior year, compared to 23% and 19% for Benjamin and Bryant respectively.

Robinson’s dominator rating and breakout age made him one of RotoViz’s favorite wide receivers in the 2014 draft. Jon Moore called him a first round talent.

Dez has better leaping ability and broke out at a younger age but both share impressive measurables.

Since 1990, only seven rookie wide receivers have averaged at least 54 receiving yards per game as a 21 year old.

This isn’t a bad list to be a part of. Robinson is extremely young, which is a good thing as no wide receiver has hit peak numbers before the age of 22. 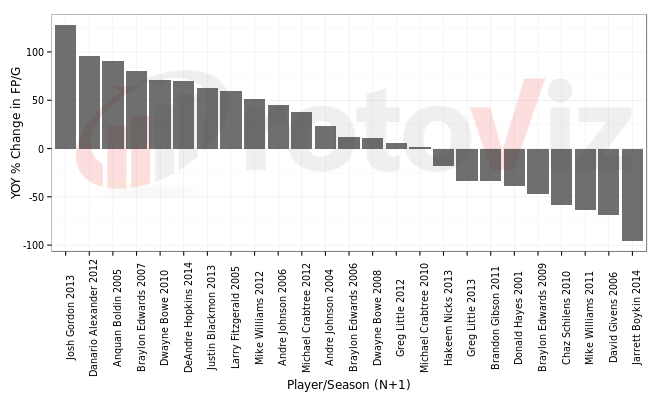 It was reported by Mike DiRocco that Robinson had numerous “wow” catches and was the most impressive offensive player on the field at OTAs. Blake Bortles called him “unbelievable” in OTAs.

To see some of his nice plays for yourself, watch this and this.

Currently being selected as WR29 in early MFL10s, Robinson could represent a massive value in fantasy leagues this year.