Even after being in the league for six seasons, some people still ask: How good is Golden Tate? It’s honestly a fair question. We haven’t had a full season of Tate being featured as the number one option in a pass heavy offense. He never saw 100 targets in Seattle, and was usually playing second fiddle to Calvin Johnson in Detroit. But when Calvin was used as a decoy or missed games entirely, we saw flashes of Golden Tate as an elite fantasy receiver. With Calvin Johnson out of the picture and Tate lasting into the fourth round as WR23 in summer drafts, it is quite likely he is significantly undervalued.

Has Tate Always Been This Good?

Dating back to his Seattle days, we always wondered what Golden Tate could do in a featured role. We marked him with a bit of an “incomplete” grade after he left, but when we look at Rotoviz’s AYA App, we can see he was actually quite effective: 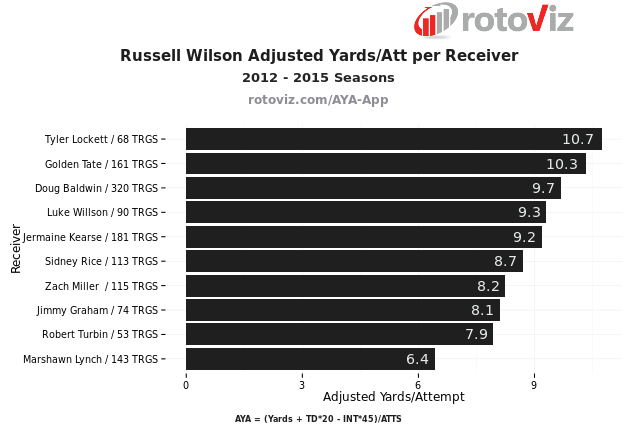 We can see that when it comes to efficiency and production, the AYA app measures Golden Tate as second in Russell Wilson’s entire career. Considering Tyler Lockett’s rookie year and Doug Baldwin’s steady excellence, that is quite a feat. This shows that he was in fact impressively efficient in Seattle, he just never saw very many targets in their run-first offenses. But how about when we stack him up to Stafford’s other recent receivers? 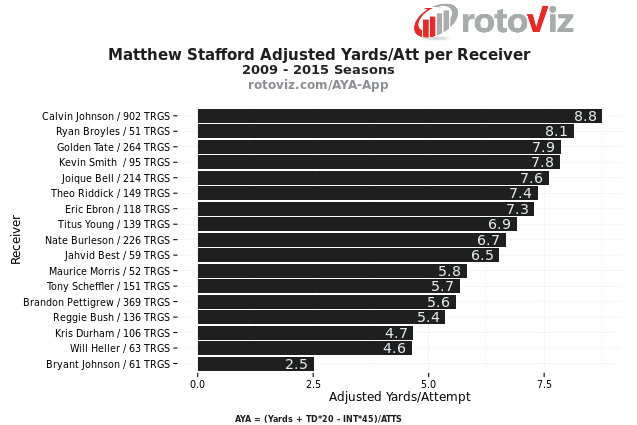 In Stafford’s career, only Calvin Johnson and a very small sample of Ryan Broyles have proven more efficient than Tate. In fact, Tate maintains his excellence despite having the third most targets on this list. These two graphs support the suggestion that Tate has been good his whole career, with or without a large dose of targets.

He Exploded Without Calvin In The Lineup

As Rotoworld’s Evan Silva points out in his Lions fantasy preview, Tate exploded without Calvin in the lineup:

If we extrapolate those averages over an entire season, that would make Tate the overall WR1 in fantasy football. Obviously, he is incredibly unlikely to reach those numbers. He is going to get more defensive attention, and naturally more volume will lead to decreased efficiency. But he finished as the WR12 in 2014 on 143 targets and the WR24 last year on 129 targets. Why then, with Calvin Johnson’s 130+ targets gone, is he only being drafted as the WR23? He’s established that’s his floor. In games Calvin has completely missed (as in, he wasn’t even a decoy), Tate dominated as well:

With Calvin Johnson out of the picture and Tate catching 90+ balls the past two years when he was the number two receiver, Tate could contend for the NFC lead in receptions with Julio Jones.

He Ended The Year With A Bang

While Matthew Stafford’s positive touchdown regression and easy schedule probably helped him more than the midseason shift in offensive coordinators, we must still take into account how he fit into both of those contexts. Tate didn’t blow the lid off the league last year as the WR24, but how did he adjust to the changes that will carry over into 2016?

Certainly a tale of two halves there. I’ve watched a lot of Lions games, and Tate was used very close to the line of scrimmage quite a bit so that Calvin would work the deeper parts of the field. That’s why his yards per catch was pretty low, but nearly 16 points per game is enough to beat his ADP. He will certainly run a more complete route tree this year to help replace Calvin’s deep prowess.

Overall, it is pretty baffling as to why Tate’s ADP is only WR23 when his situation has clearly improved and he’s proven that’s his floor with the Lions. He’s been excellent his whole career even when adjusting from a low-volume to high-volume role. His ceiling and floor both very much beat his ADP, and he’s a great value in the 4th round. Snatch him up.