Is It Time To Adjust Wide Receiver Weight Thresholds?

The NFL is consistently changing and innovating, which means that the formulas we use to make successful predictions must be continuously checked, rechecked, and updated. For predicting wide receiver success from college to the NFL, weight has historically been a very important variable. But do some current weight thresholds need updating? Let’s find out.

We have previously used 210+ lbs. as a threshold for identifying the elite wide receiver prospects. This previous study also included wide receivers drafted in the first three rounds. However, considering only 11% of WR1 seasons since 2010 are from 3rd round picks (and of those, only Keenan Allen weighed 210+ lbs with the appropriate BMI), we are reducing the sample size to the top two rounds.

Are the top wide receiver prospects actually coming into the league lighter, or is it our imagination? 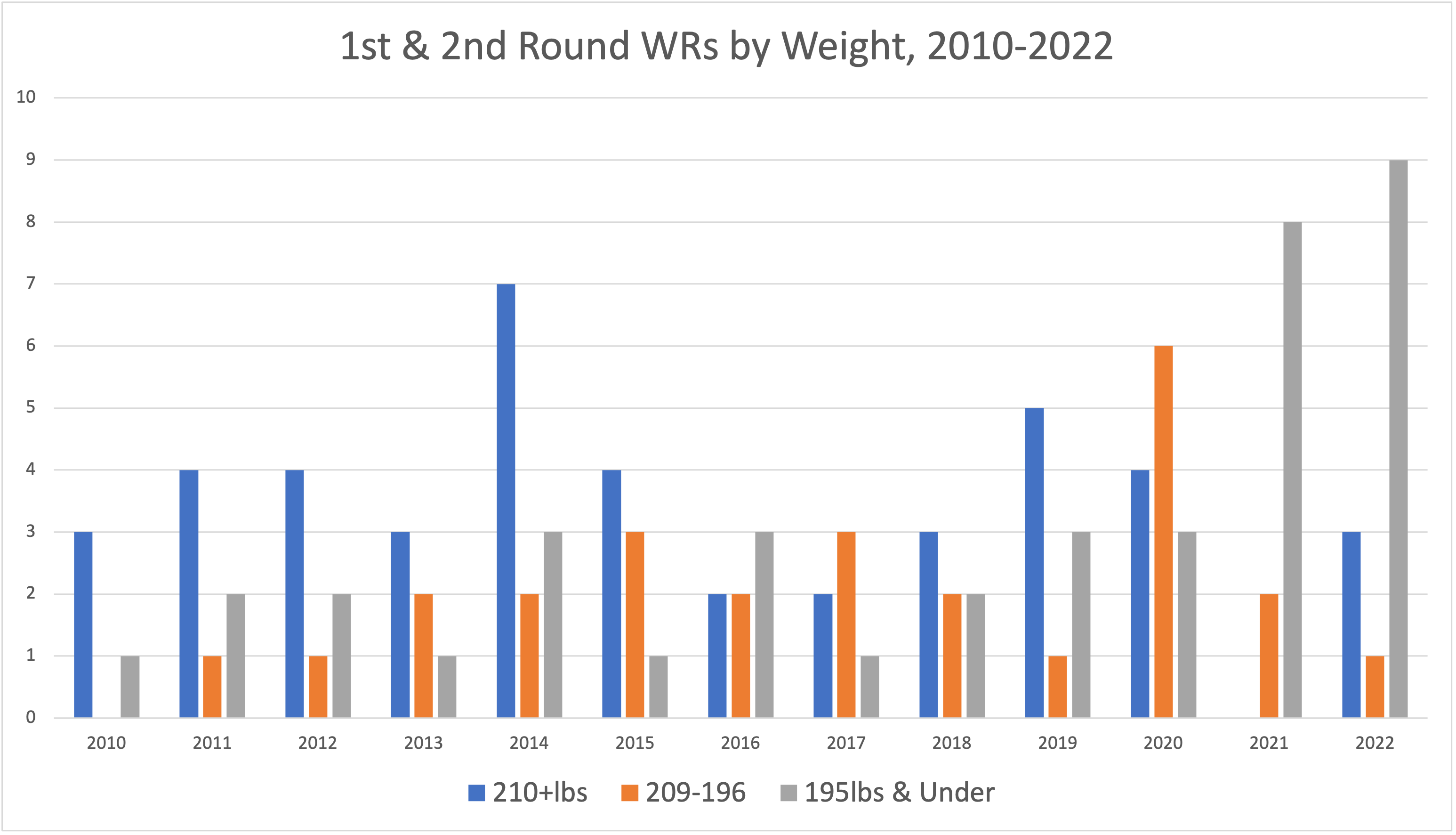 Not only are top wide receivers coming in lighter, but they are coming in significantly lighter. This difference is clearly more noticeable at the extremes with the recent decline of 210+ lb. receivers being drafted in the first two rounds, and the explosion of smaller receivers who weigh under 195 lbs. In the 10 drafts between 2010 and 2019, 22 receivers who weighed 195 lbs or under were drafted in the first two rounds. In the two drafts since then alone, that number is 17.

Accordingly, the amount of top 210+ lb. receivers drafted in the first two rounds (except for 2019) has been trending lower and lower since 2016. This is likely for a myriad of reasons (possibilities include health/longevity, a preference for lighter/faster/more versatile players, rules forcing defensive backs to be less physical, etc.) that won’t be analyzed in this article.

This has crescendoed in the past two seasons, where we have only seen 3/23 receivers drafted in the top-two rounds weigh over 210+ lbs. This is a change for NFL evaluation, considering that our previous threshold of 210+ lbs doesn’t seem to fit the recent trend in top prospect measurables.

Using BMI Instead Of Weight

However, weight is not the only measurement of size. If we are going to consider changing the threshold, we need to make sure that wide receivers are coming in lighter while still adjusting for height. Luckily, we can use body mass index (BMI) to measure weight in relation to height. As well as a 210+ lb. weight threshold, we have also previously used a BMI threshold of 27+ to identify elite wide receiver prospects.

Are wide receivers coming in lighter relative to their weight, or just smaller in general? 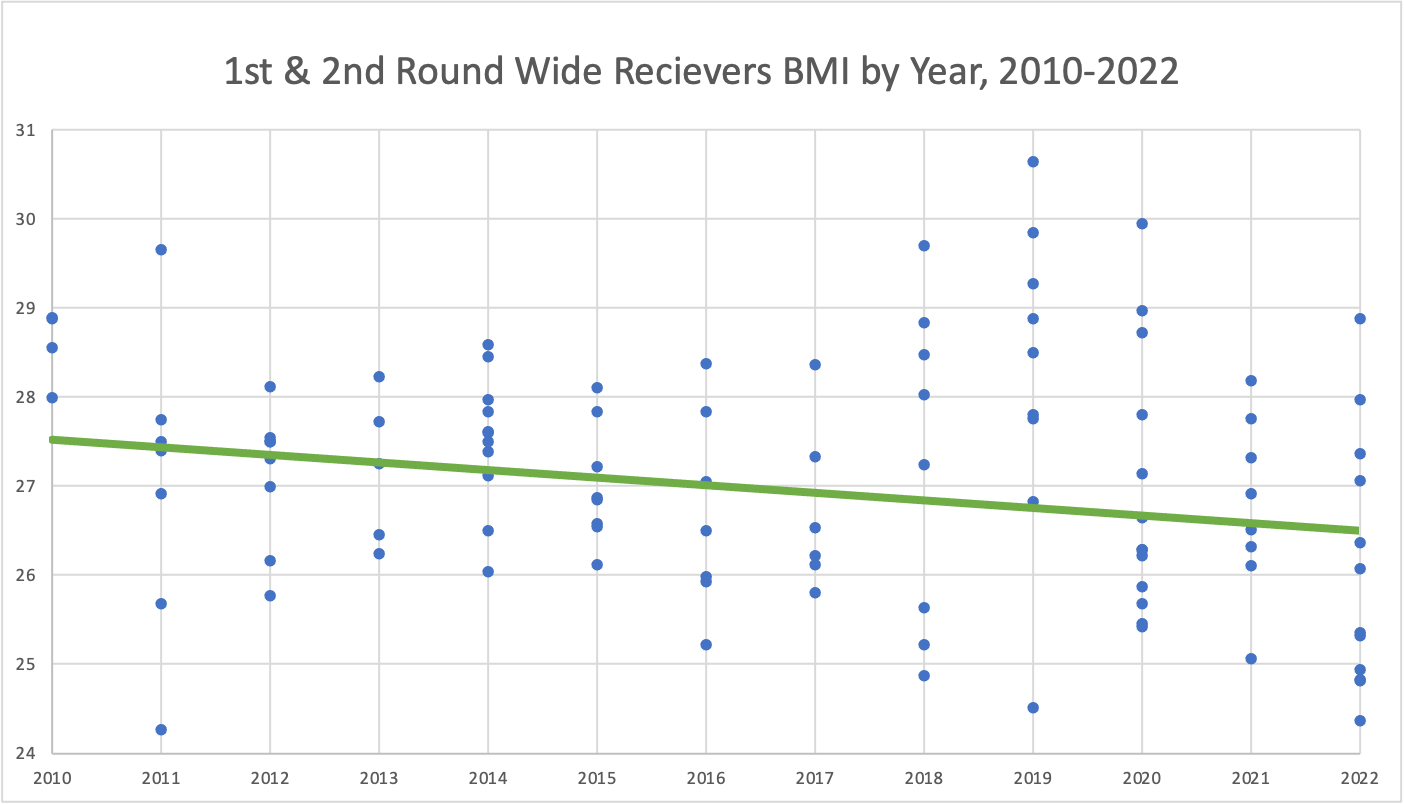 As the trendline shows, wide receivers are coming into the league smaller in relation to their height – not just in a vacuum.

It’s not your imagination: WRs are coming out of college smaller than before.

So now, we’ve established that wide receivers are coming into the league far lighter than ever before and are weighing less in relation to their height. But we are missing one final piece of the puzzle: is this trend translating to the top-scoring wide receivers, or are the heavier, larger players still dominating despite making up a smaller percentage of the pool? We’ll start in 2011 this time to give those 2010 draftees the benefit of a sophomore breakout.

Clearly, this trend is carrying over into top-end fantasy production. Considering that wide receivers peak around the ages of 26-27 and the explosion of lower BMI wide receivers at the top-end of recent drafts, the trend of smaller wideouts being able to score fantasy points at elite levels is likely not going away anytime soon.

As the 2016 and 2017 rookie classes exit their primes, the stage is only further set for recent lighter wide receivers to be some of the top-scoring fantasy options for multiple years to come. What does this mean for the current young and “underweight” receivers with top-two-round draft capital?

You don’t need me to tell you to draft recent sub-27 BMI studs like CeeDee Lamb, Ja’Marr Chase, Tee Higgins, and Justin Jefferson. However, there are several young players with top-two round draft capital that may need to be moved slightly up draft boards when accounting for this new trend.

As far as the 2022 rookie class is concerned, for now, we need to tread lightly when weighing BMI as a prospect variable. Only 5 of 13 of the top-two round prospects hit the 27 BMI threshold and we likely need to focus more on age-adjusted production and efficiency than pure weight as we gain clarity into this trend. It’s possible that prospect evaluation should shift away from overly prioritizing weight. Keep an eye out for our Mike Braude to soon release an article evaluating 2022 rookie wide receivers.

Looking Ahead To The 2023 NFL Draft

As these lighter prospects with excellent draft capital and production profiles (measurables that correlate most highly with wide receiver production) mature into their primes, this current BMI trend is likely to continue or even increase.

To confirm this, let’s look at the size of the top wide receiver prospects for the 2023 draft:

Again, we see the top wide receiver prospects coming in much lighter than a decade or even four years ago. This trend is clearly here to stay, until further notice.

This is only the first step in this weight-related research. In the future, We’ll explore just how we should adjust the thresholds we are looking for in elite wide receivers. It’s also possible we continue to place even heavier importance on age-adjusted college production (this older Rotoviz article may be worth revisiting) and draft capital.