What a tumultuous beginning 2014 was for the Baltimore Ravens and their backfield. After the Ray Rice suspension, their backfield became one giant question mark. Was it time for Bernard Pierce to finally take the reins after his promising rookie campaign? Nope. Maybe draftnik darling Lorenzo Taliaferro would have an Alfred Morris-like rookie breakout? No sir.

Instead, journeyman Justin Forsett emerged from nowhere to be a fantasy MVP finishing as PPR RB8, 5th in rushing yards and 9th in RB receptions. There’s a few red flags as he heads into his age-30 season, but there’s a huge chance Justin Forsett is in for an even bigger year. Let’s explore that possibility.

Marc Trestman’s arrival in Chicago fueled a bunch of hype for Matt Forte the past two years. Known for heavily utilizing his running backs in the passing game, Forte lived up the hype and then some to the tune of 176 receptions the past two years (including 102 last year). As Forsett has long excelled in the passing game, it would only make sense for Trestman to utilize Forsett similarly.

Here is a list of leading RBs who had Trestman as an offensive coordinator or head coach in the NFL:

Trestman has and will feed his running backs in the passing game. Joe Flacco has said he is going to dump it off to Forsett a bunch, and he isn’t the only one saying so. ESPN reports are saying his catch total could double, and the Baltimore Sun agrees.

Most notable is their relatively quiet off-season when it came to addressing the running back position. They kept Taliaferro to possibly handle short-yardage duties, but he isn’t a threat to Forsett’s job. The biggest threat probably comes in 4th round rookie Javorius “Buck” Allen, whose college tape shows passing game proficiency but little else.

His measurables reflect this (courtesy of PlayerProfiler.com):

Remember, the higher the percentile the better. The only thing Allen is really above average in his speed score, but everything else is pedestrian at best and poor at worst. He is not a special athlete by NFL standards, and is likely in Baltimore to give Forsett a breather. If that doesn’t convince you, here are his draft comparables courtesy of Rotoviz.com: 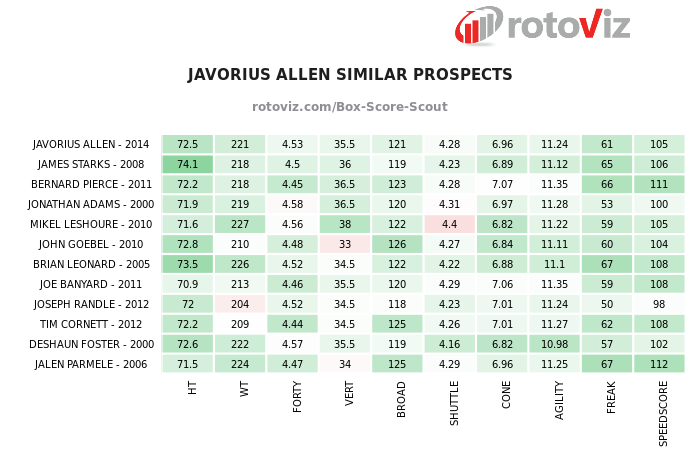 Not exactly any world-beaters here either. With no real competition at his position and big question marks at the receiver position, Forsett is going to be a centerpiece of the offense. With an ADP late in round two as RB12 overall, Forsett could prove to be a value once again.

I think his floor (health allowing) is probably 2013 Danny Woodhead, who finished as RB12 on a mere 106 rush attempts but buoyed by 76 catches. And there’s very little reason to believe Forsett won’t at least double Woodhead’s carry total while being relatively close to 76 receptions. A healthy ceiling with a high floor, Forsett is a safe-if-unsexy pick in 2015.