In 2017, Tyler Boyd finished as WR104 – a pretty forgettable year to say the least. This made him an afterthought on draft day in 2018. Those with the foresight to draft him or pick him up early in the season were rewarded with a breakout WR15 finish, as he became a weekly advantage in your lineup at basically zero-cost.

Now that is what we call a “league winner”, and Tre’Quan Smith is a sneaky candidate to pull a 2018 Tyler Boyd and go from zero to hero in 2019.

Even though he isn’t a “sexy rookie” pick anymore, we should not ignore the fact that Tre’Quan Smith is an excellent prospect. Per our friends at RotoUnderworld, Smith is a very good athlete. 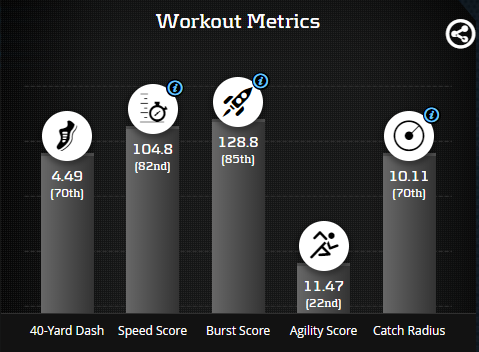 In every category except for agility score, Smith is in at least the 70th percentile among NFL players for his workout measurements. He’s also 6′ 2″, 210 lbs.

If that isn’t enough, his production was also good. Smith had a 60th percentile dominator rating, an 83rd percentile yards per reception, and an 86th percentile breakout age.

Elite Company As A Rookie

Believe it or not, Tre’Quan Smith actually had a very historic rookie season that puts him in very elite company. Below are all the rookies of the past 10 years, who at age 22 or younger, had at least 9 yards per target and 5 touchdowns:

The obvious outlier here is Kenny Stills – who is the only player on this list who was drafted after the 3rd round. Regardless, Stills had a WR26 finish in 2017.

Otherwise, Smith is in elite company as all of the other receivers besides Stills on this list went on to have WR1 campaigns very early on in their careers.

The combination of Smith’s outlook as a prospect and his rookie year efficiency paint a favorable picture for the future.

An Absolute Value At His ADP

According to Fantasy Football Calculator, Tre’Quan Smith is being drafted in the 14th round as WR61. Basically, he can be had at little to almost zero cost.

Smith is arguably this year’s best example of “rookie derangement syndrome”, which is overvaluing the sexier rookies and undervaluing 2nd-year players.

Here is a list of WRs I’d take Smith over (even in a vacuum):

Other low-ceiling veterans such as Demaryius Thomas and DeVante Parker would be behind Smith in my ranks as well.

Obviously, Michael Thomas and Kamara are the alphas in the New Orleans passing attack. While Jared Cook and Ted Ginn are formidable competition, they have always been low-volume players.

It is entirely conceivable that Smith finishes third in targets on an elite offensive and if anything were to happen to Thomas, the sky is the limit.

Tre’Quan Smith is an excellent prospect – in terms of athleticism and college production. His tremendous efficiency as a 22-year-old rookie further illustrates that he’s the good young player that we believe he is. While the state of his team’s offense isn’t ideal for a breakout, it’s far from prohibitive.

Do yourself a favor: skip the overvalued rookies and select Tre’Quan Smith.

excellent info, could not agree more!