Is Tyler Boyd the Best Value in Fantasy Football?

Perhaps it’s his first two disappointing seasons (or the Bengals propensity to disappoint), but whatever the reason Tyler Boyd is being dramatically undervalued in early fantasy football drafts. Here’s why he’s likely to outperform his current average draft position.

Boyd had a fantastic college career before being selected 55th overall by the Bengals. He broke out as a true freshman – catching 85 passes for 1,174 and seven touchdowns. His dominance continued through his college career, finishing with 254 receptions for 3,361 receiving yards and 22 total touchdowns.

Using an objective comparison prior to their professional careers, Boyd compares favorably.

The good news is that doesn’t doom him – Boyd broke out in a big way last season, finishing as WR17, despite playing just 14 games. Third-year breakouts are a common trend at the wide receiver position.

Just ask Davante Adams – who is now being selected as the WR2 after (compared to expectations) disappointing his first two seasons. In spite of struggling in his age 22 and 23 seasons, Adams broke out in his third season – like Boyd did last season.

Despite struggling early in his career, Adams has become a star. Let’s see how the two compare after three NFL seasons.

Despite having Andy Dalton at quarterback instead of Aaron Rodgers, Boyd compares favorably to Adams. He hasn’t caught as many touchdowns but he’s catching more passes per game and he’s far more efficient with his targets. In fact, Boyd is averaging more yards per target in his career than Adams has in any individual season.

Boyd is Superior to the Receivers Drafted Ahead of Him

Per the FFPC average draft position on RotoViz, Boyd is being selected as the 28th wide receiver off the board. The five wide receivers drafted ahead of Boyd are Calvin Ridley, Allen Robinson, Jarvis Landry, Mike Williams, and Tyler Lockett.

Somewhat surprisingly, only first-round picks Mike Williams and Calvin Ridley were selected higher in the NFL draft than Boyd. Entering his fourth season, Boyd is only a month older than stud sophomore Ridley.

Lockett leads all receivers in most efficiency stats but Seattle’s low-volume passing attack hurts his production. Doug Baldwin’s retirement may help but Lockett has never topped 71 targets in his career and with Seattle’s run-heavy approach, it’s hard to project him for over 90 targets.

Landry somewhat survived on volume last season but he still disappointed. The addition of Odell Beckham Jr. and development of Baker Mayfield will increase Landry’s efficiency, but his volume will be suppressed.

Ridley could be in for a big sophomore year but there are volume concerns with Julio Jones receiving an average of 169 targets per season over the past five years.

Williams was extremely productive on just 66 targets last season but was hugely reliant on scoring, which he did at an unsustainable rate. The return of Hunter Henry will likely reduce the number of red zone targets he receives.

Despite high hopes, Robinson’s first year with the Bears was largely disappointing. Boyd outproduced A-Rob in nearly every statistical measure.

Skeptics may be concerned that Boyd’s production came with A.J. Green out. Boyd was actually much more productive when Green was on the field. 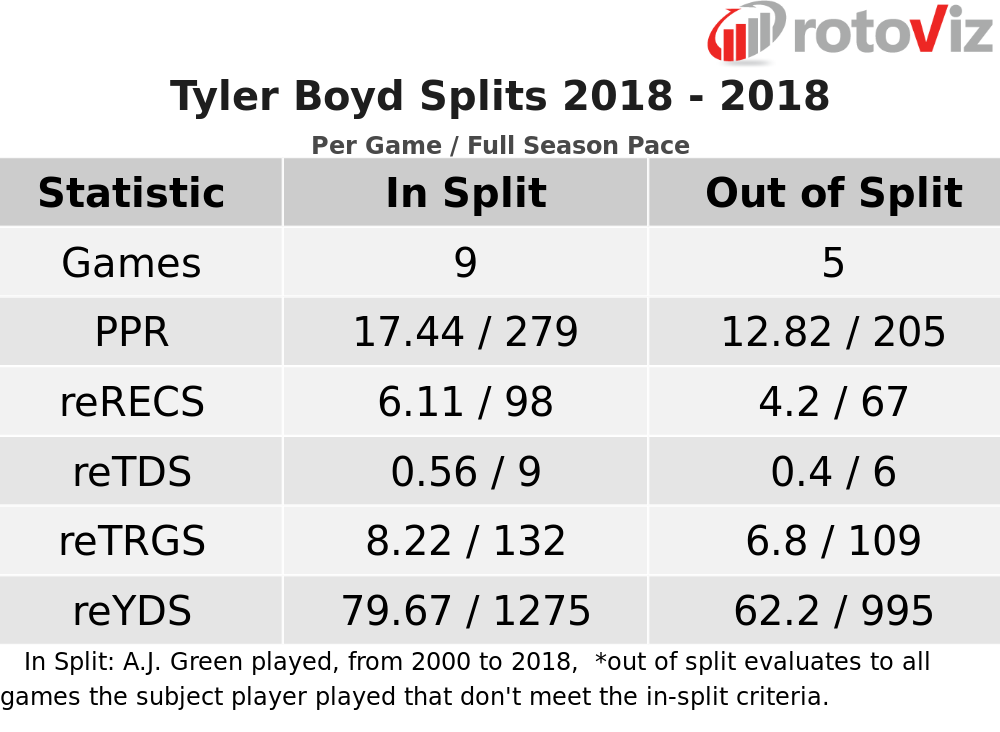 He was targeted more frequently and scored more touchdowns per game.

At just 24 years old, it’s likely that Boyd is still getting better. However even after finishing as the WR17 last season, Boyd is being discounted so heavily that he’s available as WR28. There may not be a better value in the fantasy football market.

I took Boyd midway through the 2017 year and he has not let me down the last two years. I hope Iam in positon to draft him again this year, he will be definitely a second round pick at least. steve