What Do Jay Cutler’s Starts Tell Us?

When looking at the 2013 Chicago Bears, several things stand out. There was a big difference in who was targeted depending on whether Jay Cutler or Josh McCown was starting.

I used RotoViz‘s Game Splits App to research this article. I highly suggest checking out their League Winning Articles and game breaking apps. 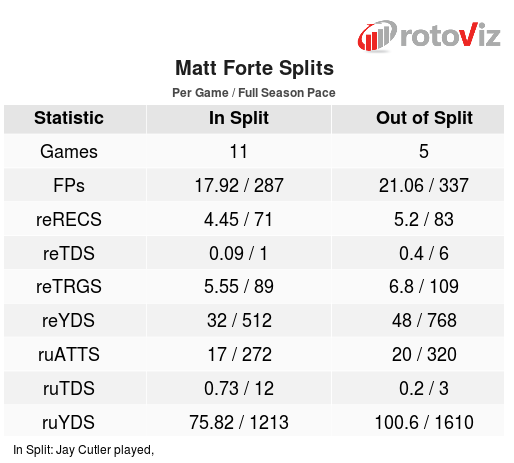 As you can see, the Bears gave Forte more carries with Josh McCown. He was also targeted an extra 1.25 times a game when McCown was under center. He ran for more touchdowns with Cutler but caught more with McCown. Forte averaged 3.14 more fantasy points per game with McCown starting.

Those who know are familiar with the Bears know how Cutler has a tendency to lock onto Marshall. Let’s see if the App agrees: 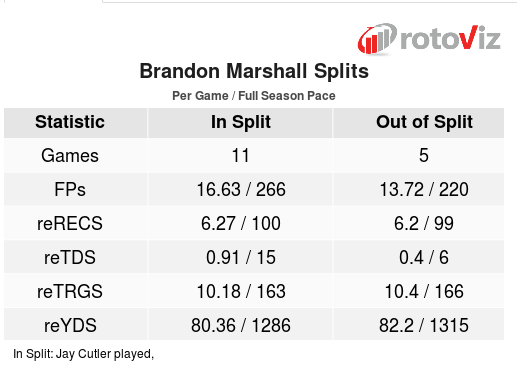 When playing with Jay Cutler, Marshall actually saw 0.22 fewer targets per game. This may have to do with some games where Cutler left the game due to injury. Marshall made up for it by catching 0.51 more touchdowns per game during Cutler’s starts. Marshall averaged 2.91 more fantasy points per game when playing with Cutler.

Who suffered as a result?

Is Cutler’s tendency to lock on to Marshall in the red-zone enough to shy away from Jeffery’s late 2nd round ADP? Possibly but I’d expect Jeffery to regress to the mean.

With Cutler, Bennett saw one more target per game and was almost twice as likely to catch a touchdown. Bennett averaged 2.46 more fantasy points per game with Cutler as his quarterback. Bennett finished as the 10th best tight end in Apex leagues last season. Currently being taken as the 14th TE, he’s shaping up as a value pick.

While Brandon Marshall and Martellus Bennett look likely to benefit with Cutler at the helm, Matt Forte and Alshon Jeffery don’t look as fortunate. I wouldn’t be too concerned with Forte but Jeffery was clearly superior in McCown’s starts. Although I’ve seen some take Jeffery over Marshall, these game splits make Marshall the clearly superior option.