In the NFL draft, we love to see where rookies land and how teams structure their future. We can also learn as much about how a team thinks of their existing players by paying attention to whom they don’t draft. Here are four non-rookies who emerged from the NFL draft with higher stock.

After many owners grabbed Sanders in the 6th-7th rounds of 2019 fantasy drafts, they were disappointed early on to see plodder Jordan Howard hogging the glory in the Eagles’ backfield. There was some conjecture that despite his incredible prospect profile they didn’t see Sanders as a lead back or even the leader of a committee.

That changed in the last five games. Take a look at how Miles Sanders finished the season as the bell-cow last year: Obviously, it would be difficult to keep up this pace – but it would have made him the overall RB2 ahead of Aaron Jones last year.

There was speculation that the Eagles could take an RB in this draft after Howard left for Miami, but despite having 10 draft picks the Eagles didn’t take one. This bodes incredibly well for Miles Sanders’ 2020 prospects as a possibly elite RB1.

He’s currently going as the overall RB12 in early drafts behind players who lack his receiving production, such as Joe Mixon and Nick Chubb. As the definite alpha-dog on what should be a great offense, Miles Sanders may be actually undervalued.

D.J. Moore had a promising rookie season and was an elite wide receiver prospect, which led us here at Apex to tout him as a breakout guy going into the 2019 season. Despite playing with Kyle Allen for most of the season, D.J. Moore finished as the WR15 in fantasy with the 10th most catches and 8th most yards in the NFL.

Teddy Bridgewater being Carolina’s 2020 starting quarterback doesn’t exactly make them Super Bowl contenders, but it is fine news for Moore. Bridgewater was not afraid to target Michael Thomas in the short and intermediate parts of the field. In fact, Thomas averaged over 10 targets per game with Bridgewater, only 0.5 PPR points less than with Drew Brees. He is a definite upgrade on Kyle Allen.

With Greg Olsen retiring, the Panthers signed Robby Anderson as the only real addition to their receiving group. But considering Bridgewater finished 39th out of 39 qualifiers in intended air yards per attempt per NFL Next Gen Stats, Anderson will not be seeing anything close to consistent usage.

Despite what some consider a thin skill-positioned corps, the Panthers drafted defensive players with every single one of their draft picks. In fact, there were even rumors they might deal Curtis Samuel during the draft.

Anderson, Samuel, and Ian Thomas will all be complementary pieces to Christian McCaffrey and D.J. Moore. The Panthers’ recent transactions and draft have confirmed that. With his lack of major target competition (outside of McCaffrey, who barely out-targeted him 142-135 last year), improved quarterback play, and elite profile, D.J. Moore is a WR1 who will be available in the 3rd round of drafts.

He may not be the same Todd Gurley we saw in 2017 and 2018, but Todd Gurley still finished as the RB14 last season despite a career-low in rush attempts and a large dropoff in receiving production (fewest number of targets and yards since his rookie year).

After being let go by the Rams, Gurley landed in the perfect landing spot: Atlanta, who had just released Devonta Freeman and were laughably giving Ito Smith and Brian Hill major work in 2019.

They signed zero wide receivers in free agency and downgraded from Austin Hooper to Hayden Hurst at TE. Many were expecting them to be in the mix for a skill-position player, but draft day came and went without any RB, WR, or TE additions to the Falcons.

With only one season on his contract, the Falcons are going to run Gurley into the ground. His only real target competition is Julio Jones and Calvin Ridley and the Falcons passed to their running backs 17% of the time in 2019, compared to only 10% for the Rams.

He is currently going in the middle of the third round behind timeshare backs like Jonathan Taylor, Devin Singletary, and Melvin Gordon. Somehow still only 25 years old, Gurley’s situation warrants him a value.

After the fantasy community finally ran out of patience for him, DeVante Parker finally broke out in 2019 with a 72/1,202/9 line en route to an overall WR11 finish. He was absolutely dominant after promising rookie Preston Williams went down, and was on a pace that would’ve made him the overall WR2 last year: 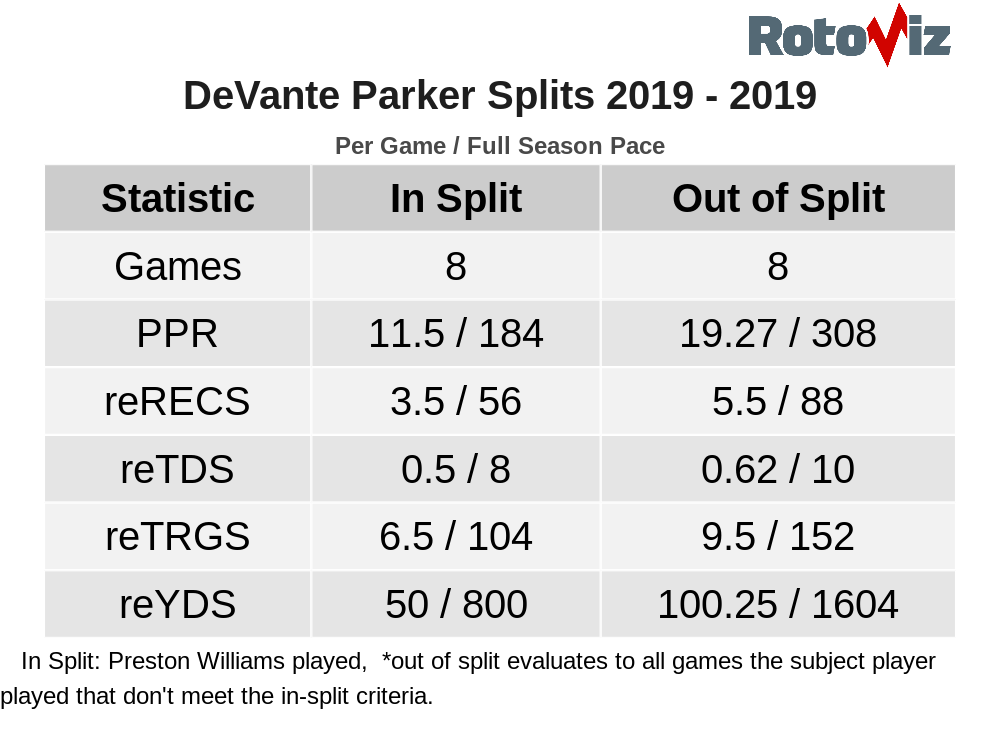 Speaking of Williams, he was on pace for a 64/856/6 line as a rookie before his injury. Here is a list of players who have hit that threshold as a rookie since 2000:

Quite a few fantasy-relevant seasons on that list. Williams may not prove to be a superstar, but his rookie year is certainly one that is underrated.

The Dolphins could have reloaded at the skill-positions during the draft, but instead chose to focus on other areas. Most importantly, they took a proven producer in Tua Tagovailoa who at Alabama showed he can support multiple stud receivers. They traded for Matt Breida and added Jordan Howard, but neither have been prolific receivers thus far in their careers.

The only wide receiver they took with their 11 picks was in the 7th round at 246th overall (Malcolm Perry out of Navy). The Dolphins look poised to enter 2020 with Parker, Williams, and TE Mike Gesicki as their primary pass-catchers.

Even if Ryan Fitzpatrick has to make starts in 2020, this cannot be considered a negative: after all, he carried the Buccaneers to their prolific offensive start in 2018 and made Parker and Williams more than relevant in 2019.

Parker is currently going as the WR24 at the end of the fifth round, and Williams is going as the WR55 in the 12th. Even if their ADPs rise a bit, they are both values for 2020 fantasy owners.