This offseason, we have a nearly unprecedented number of starters at the quarterback position hitting free agency – and surprisingly few teams in complete desperate need of one. This promises that the class of ‘NFL free agents 2020’ is going to be very dramatic and compelling. Not including the teams who have free-agent starters only Carolina, Chicago, Indianapolis, Jacksonville, and Miami have serious questions at the position for 2020. I have left off Cincinnati, as it is a foregone conclusion that they will be selecting Joe Burrow first overall.

Let’s get into some predictions as to where these quarterbacks will land.

Brady’s 6.6 yards per attempt is his lowest since 2002, and his 24 touchdowns are his least since 2003. This past season saw the track record of failed Patriots outside receivers expand, and N’Keal Harry’s rookie season numbers put him on major “bust” alert. They got nothing from the tight end position, and Sony Michel was exposed as an average running back at best. All of this ugliness reared its head in a Week 17 defensive meltdown against Miami that cost the Patriots a bye, followed by a convincing Wild Card round loss to the upstart Titans.

2020 Prediction: Returns to New England on a short-term deal. At age 43 (by the start of next season), it is abundantly clear that Brady’s best football is behind him. But the Patriots still won 12 games, had a chokehold on a playoff bye until Week 17, and Brady’s relationship with Robert Kraft is still incredibly strong. With Josh McDaniels not taking a head coaching job and Bill Belichick still running the show, the Patriots will always be in the hunt. 2019 showed the Patriots that they need to upgrade their skill position players – something that will surely be emphasized in Brady’s negotiations. There is a chance that Gisele will convince Brady that Los Angeles is a more attractive option, but Brady’s legacy remains in New England.

2019 In Review: Philip Rivers left a really bad taste in the mouths of the Chargers and their fans. Take a look at his final three games of 2019 compared to the rest of the season. 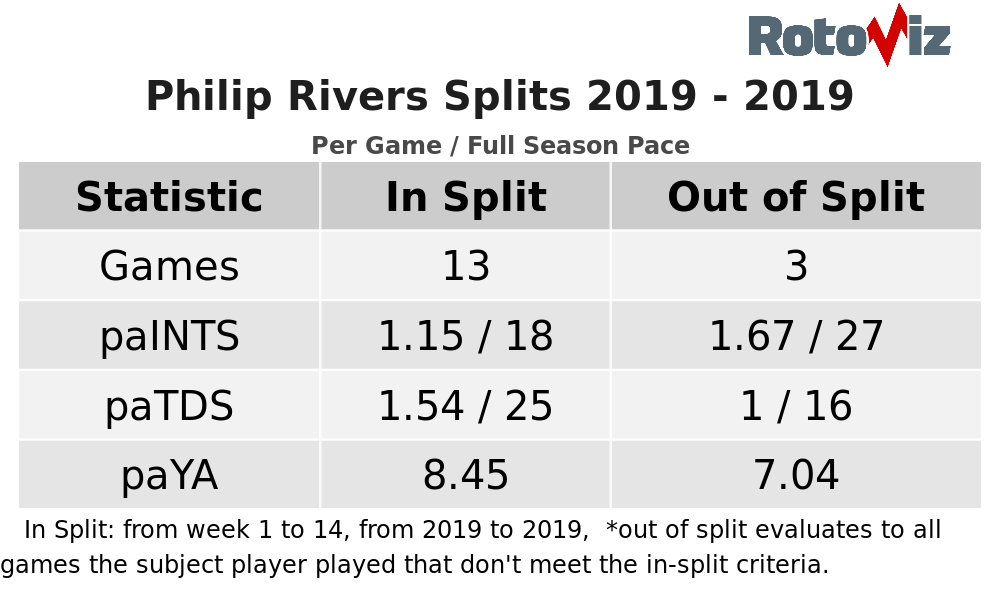 At times, Rivers seemed to be imploding – throwing up balls for grabs at the end of games without care and seemingly having a nonchalant attitude towards doing so. His turnover stats and efficiency were atrocious.

The Chargers yet again routinely choked in one-possession games and finished last in the AFC West at 5-11. Despite them having Hunter Henry, Melvin Gordon, Austin Ekeler, Keenan Allen, and Mike Williams, the Chargers finished 21st in points per game.

2020 Prediction: Signs with Indianapolis Colts on a short-term deal. With Chargers coach Anthony Lynn on the hot seat and needing a change, Rivers is unlikely to return to Los Angeles. The Chargers may want to give Taysom Hill-like Easton Stick a chance or can select nearly any quarterback in the draft. Tua Tagovailoa is even an option if the Dolphins pass or the Chargers trade up. I predict Rivers reunites with ex-QB coach/offensive coordinator Frank Reich in Indianapolis: a team with T.Y. Hilton, a stable of RBs and TEs, and a studly offensive line – something Rivers seemingly never had with the Chargers.

2019 In Review: Dak Prescott was by nearly all statistical measurements a top-tier quarterback in 2019. He shattered career marks in passing yards with 4,902 (2nd in the NFL, previous career high was 3,885) and touchdowns with 30 (4th in the NFL, previous career high was 23). With Kellen Moore innovating the offense, second-year stud Michael Gallup and fellow impending free-agent Amari Cooper proved to be a devastating offensive duo for Prescott. They finished short of the playoffs in a weak division, however, prompting a coaching change.

2020 Prediction: Returns to Dallas on a long-term deal. Franchise quarterbacks don’t grow on trees, and Prescott has made strides every year he has been in the league. With playmakers on both sides of the ball, Dallas wouldn’t dare let their contention window slam shut by letting Prescott – by far the best young QB on the market – walk to a different city. They have some cap issues to deal with and need to re-sign Cooper, but there are signs of continued hope. New coach Mike McCarthy has apparently learned from his mistakes in Green Bay and is ready to modernize, and the Cowboys retained up-and-coming coach Kellen Moore. 2020 should once again be a fruitful offensive season for the Cowboys.