This offseason, we have a nearly unprecedented number of starters at the quarterback position hitting free agency – and surprisingly few teams in complete desperate need of one. This promises that the class of ‘NFL free agents 2020’ is going to be very dramatic and compelling. Not including the teams who have free-agent starters, only Carolina, Chicago, Indianapolis, Jacksonville, and Miami have serious questions at the position for 2020. I have left off Cincinnati, as it is a foregone conclusion that they will be selecting Joe Burrow first overall. For Part 1 in this series, click here!

Let’s continue predicting where these quarterbacks will land:

2019 In Review: We may think that Drew Brees is in a bit of a decline, but the statistics tell a different story. Take a look at his full-game pace from after he returned from his thumb injury:

His full-season pace post-injury is nothing to overlook – it would’ve made him the QB2 behind Lamar Jackson in fantasy for 2019. The 44 touchdowns would’ve been the second-most of his career, and the 4,571 passing yards would be the 5th most in the NFL this past season.

Teddy Bridgewater was solid in relief, but was not particularly close to Brees’ level:

After going into the playoffs as a favorite to win the Super Bowl, the Saints embarrassingly lost to the Vikings at home in the Wild Card Round.

2020 Prediction: Returns to New Orleans on a short-term deal. It’s no secret that New Orleans is the only place Drew Brees is going to play professional football. The question becomes: does he pull a Tony Romo and take a lucrative television contract? With such a promising 2019 regular season and a Super Bowl ready roster, odds are that Brees returns to have another go at his second championship ring. Michael Thomas is at the peak of his powers, he has seam-stretcher Jared Cook under contract for another year, the offensive line remains a strength and the defense that took the league by surprise last year is also intact. Look for New Orleans to be among the preseason Super Bowl favorites in 2020.

2019 In Review: In one of the most unlikely stories in recent memory, Ryan Tannehill took over a 2-4 Titans team from Marcus Mariota (who somehow has gotten worse every single year) and marched Tennessee to their first AFC Championship game since the 2002 season . Derrick Henry did a ton of the heavy lifting, but Tannehill lead this offense on a scoring efficiency stretch unlike any in league history – at one point, the Titans had 40 red zone TDs compared to ONE red zone field goal. He lead the league in yards per attempt and QB rating while unlocking budding superstar A.J. Brown: 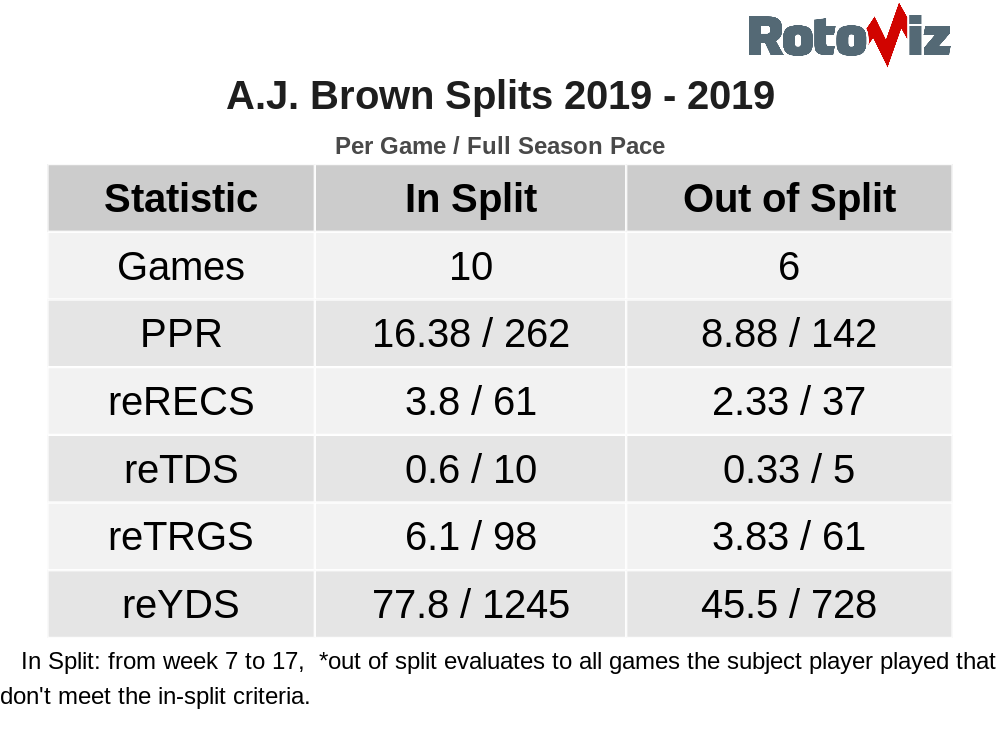 2020 Prediction: Receives the Franchise Tag from Tennessee. Ryan Tannehill would not be the first “journeyman” quarterback to have a rebirth with a new team (Rich Gannon and Trent Green would like a word), but Tennessee would be smart to not tie down their cap space with an unproven quarterback (see Goff, Jared). Giving Tannehill a full-season audition while paying him like a top-five QB would be a win-win for Tannehill and Tennessee, who also need to re-sign playoff superhuman Derrick Henry.

2019 In Review: In one of the most baffling QB seasons in NFL history, Jameis Winston: lead the league in passing yards (8th most in NFL history for a single season) and was second in the league in touchdowns… while having the first 30+ interception season since 1988. Only with Winston could a player lead one of the most electrifying passing offenses while facing weekly questions about his place in the starting lineup.

The Buccaneers actually battled their way into playoff contention before dropping their last two games at home to finish 7-9. But what Winston did with Mike Evans and Chris Godwin is historic – here is the list of WR teammates with 17.7 PPR fantasy points per game since 2000:

2020 Prediction: Signs with Carolina. Bruce Arians seems to have had enough of Jameis Winston’s turnovers, as evidenced by his post-season comments: “If we can win with this [quarterback], we can definitely win with another one, too.” But a little further north, the Panthers have a few offensive cornerstones that are desperately in need of someone other than Kyle Allen running the offense. We know Jameis won’t be afraid to target Curtis Samuel deep or force-feed D.J. Moore, while providing a running game with Christian McCaffrey that he never had in Tampa Bay. It appears that Cam Newton has played his last downs in Carolina, and the younger, longer-leashed (7-year contract) Matt Rhule may have more capacity for Jameis’s ups and downs.