Nine Rookie Wide Receivers To Keep An Eye On In 2017

In fantasy football leagues wide receivers have a history of struggling in their first season, but some rookies have had an immediate impact. For example, you were sitting pretty if on draft day you identified Michael Thomas last season, Amari Cooper’s rookie campaign in 2015, and Odell Beckham Jr.’s league winning performance in 2014. Identifying which rookies have a higher probability of success and which ones to avoid is key to maximizing your drafting. To show the characteristics of each receiver, we’ll use RotoViz’s Box Score Scout app. Here are nine rookie wide receivers you will want to keep an eye on in 2017.

Let me preface this by saying that this doesn’t appear to be a year that many receivers will have an immediate impact. Still, it’s important to study the rookie wide receivers because injuries create a lot of opportunities during the season.

The one clear rookie wide receiver stud from the 2017 NFL draft is Corey Davis. While he didn’t play against the best competition at Western Michigan, he has most of the characteristics that we look for in prospects. Drafted 5th overall, Davis broke out at a young age and dominated the market share of his team’s receiving yards and touchdowns. At 6’3”, Davis has several impressive similar prospects. 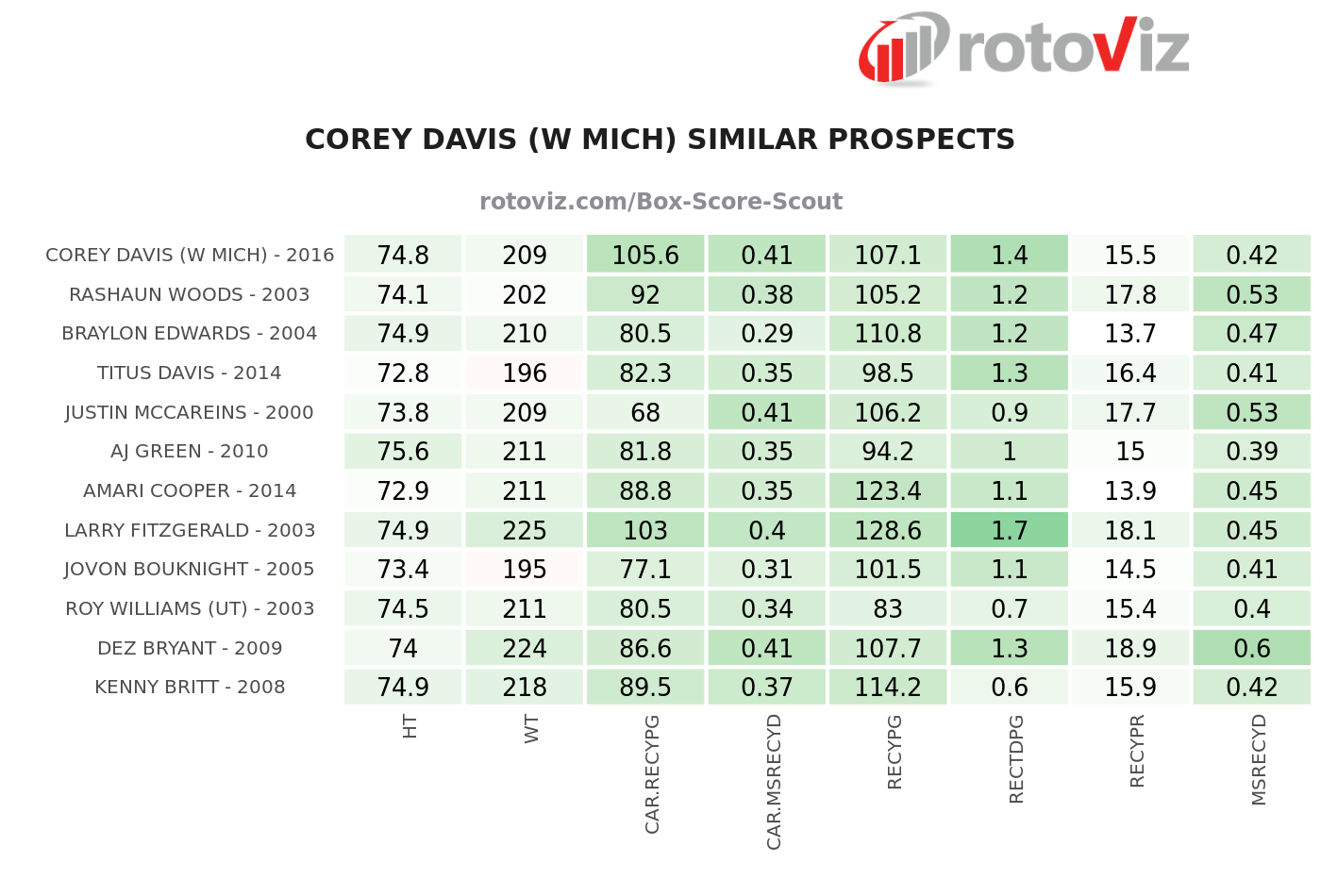 Davis averaged an extremely impressive 105.6 receiving yards per game for his college career. With the draft position, physical tools, and production to match guys like AJ Green, Amari Cooper, Larry Fitzgerald, and Dez Bryant, there is a lot to like about Davis. He likely has a bright future but with Eric Decker joining Delanie Walker and Rishard Matthews, it’s hard to imagine Davis breaking out as a rookie. 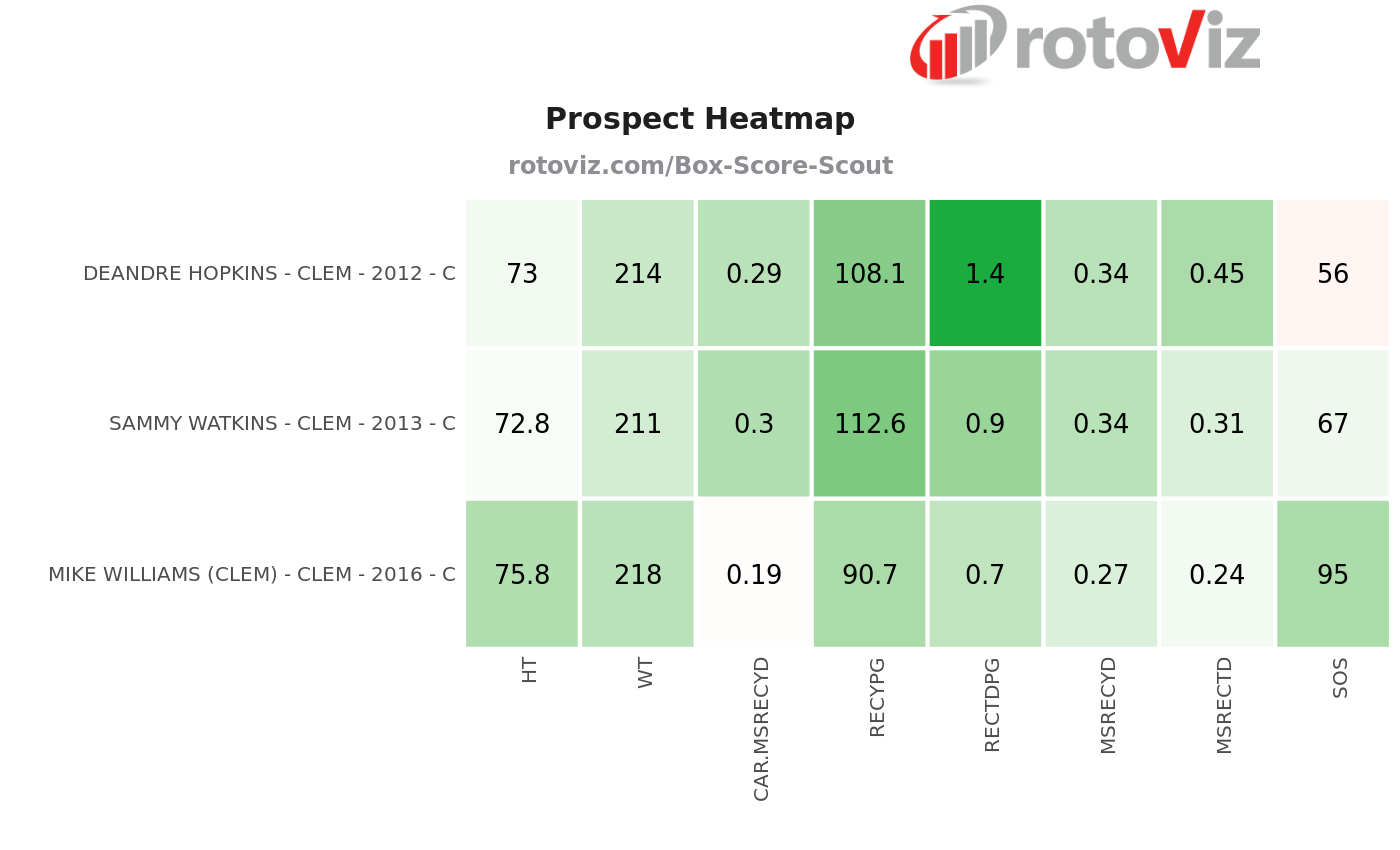 Williams is taller and heavier than his Clemson predecessors but lacks the same type of production. His career market share of receiving yards was 10 percent lower than both DeAndre Hopkins and Sammy Watkins. Williams was also outperformed by both as a senior. Showing an underwhelming 40 time and jumping ability at his pro day, Williams will need to show elite ball skills to succeed in the NFL. With many mouths to feed in Los Angeles, it’s unlikely that Williams makes a big impact in 2017 without an injury to one or more pieces of the Chargers’ passing game.

John Ross is already known by many after breaking the record for the fastest 40 time in NFL Combine history. His size and speed combination makes him similar to prospects like Brandin Cooks, DeSean Jackson, Mike Wallace, and Will Fuller. Let’s see how he stacks up.

His speed is obviously the best ever but Ross also possesses impressive jumping ability, finishing with the highest explosion score of the cohort. While he held his own in terms of market share as a senior, his career market share of receiving yards is lacking. The good news is Ross returned from tearing his ACL in 2015 to dominate as a senior. Although Ross should be involved as a rookie, expectations should be held in check by target hog AJ Green and red-zone dominator Tyler Eifert. Gio Bernard, Joe Mixon, Tyler Boyd, and Brandon LaFell will be competing for scraps along with Ross.

Drafted No. 37 overall by the Buffalo Bills, Zay Jones joined a receiver needy team. With Sammy Watkins banged up, the Bills had one wide receiver top 450 yards: Robert Woods. Woods has moved on to join the Los Angeles Rams, leaving opportunity behind. With a chance to make an immediate impact, let’s take a look at Jones’ production.

While Jones racked up 158 receptions as a senior, no other teammate caught more than 58 passes. Despite not playing against the best competition, his market share of receiving yards and touchdowns are promising. Per Player Profiler, let’s look at his athleticism.

Jones’ athleticism is very well rounded bolstered by his SPARQ score falling in the 88th percentile. Finishing last in the NFL with 474 pass attempts, will the Bills have the volume to support another fantasy-relevant receiver behind Sammy Watkins?

Like Percy Harvin, Randall Cobb, and Tavon Austin, Curtis Samuel was a moveable chess piece in college. In his final college season, Samuel averaged 59.3 rushing yards to go along with 66.5 receiving yards per game. He’s the second youngest receiver in this year’s draft behind JuJu Smith-Schuster, which is a good sign for future success. Let’s see how he compared to his similar prospects.

Samuel blazed to a 4.31 forty time, tying Austin, and finishing faster than Harvin and Cobb. Samuel averaged more rushing yards per game than all three and paced them with his market share of receiving yards.

While he’s a very intriguing prospect, his landing spot is a tad concerning. The Panthers do need targets in the passing game but Samuel’s ability in the short passing game could be considered redundant to first round pick Christian McCaffrey. The concern is the two will eat into each other’s targets.

Player Profiler calls JuJu Smith-Schuster’s best comparable DeAndre Hopkins. Both broke out at a young age (JuJu is the youngest receiver in this draft class) and share similar physical size and athletic ability. Below is a heatmap that shows both players’ last two collegiate seasons.

The size, speed, and jumping ability of these two are nearly identical. While DeAndre Hopkins had the best final season, JuJu’s best season came as a sophomore. Catching 39 percent of his team’s receiving yards, JuJu dominated against difficult competition. Although he disappointed as a junior, JuJu has shown the ability to dominate and was an expected first round pick before his final season at USC.

Behind Antonio Brown, Martavis Bryant, and Le’Veon Bell, it’s unlikely that JuJu’s sees many targets as a rookie. It’s clear, however, that JuJu has massive potential.

In terms of guys who dominated the combine, Chris Godwin is near the top of the list. His athleticism gives him a SPARQ score of 128.3 (95th percentile). Godwin has good speed, jumping ability, and agility.

While he’s been making noise in camp, Godwin has played strictly the outside receiver positions. This means he would likely need an injury to Mike Evans or DeSean Jackson to have an impact in 2017.

With the 82nd overall pick, the Broncos drafted Carlos Henderson. A relatively small playmaker, Henderson matches speed with impressive jumping ability. He had an impressive senior year at Louisiana Tech.

His smaller size leads to similar prospects like Golden Tate, Corey Coleman, and Willie Snead. Target hogs Demaryius Thomas and Emmanuel Sanders have dominated opportunities in the Broncos’ passing game but Henderson will have a chance to slide in as the starting slot receiver.

Last but certainly not least is Kenny Golladay. At 6’ 4” 218 lbs., Golladay combines height, above average speed, and impressive production.

For his career, Golladay had 41% of his team’s receiving yardage. That’s higher than every player on this list, that includes AJ Green and Larry Fitzgerald.

Golladay has wasted no time making an impression in OTAs. Per beat writer Michael Rothstein, “Everything he has shown so far has been impressive. He has: run routes well, made a bunch of difficult catches, had good run-after-the-catch, an excellent jumping radius and good hands.” While he’s still behind Golden Tate and Marvin Jones, Golladay could take over Anquan Boldin’s 2016 targets.

HELLO THERE I’M BRAIN FARTING HOW DO I GET TO THE DRAFT ROOM………..THANK YOU