This is the AFC edition of the offseason headline article to update fantasy owners on what’s transpired during the NFL free agency period. This article pertains to players who now play in the AFC, below is how we expect each player to be impacted by their new team. Here is the NFC Edition.

Sammy Watkins to the Chiefs

In terms of efficiency, Sammy Watkins performed very well on the Rams. 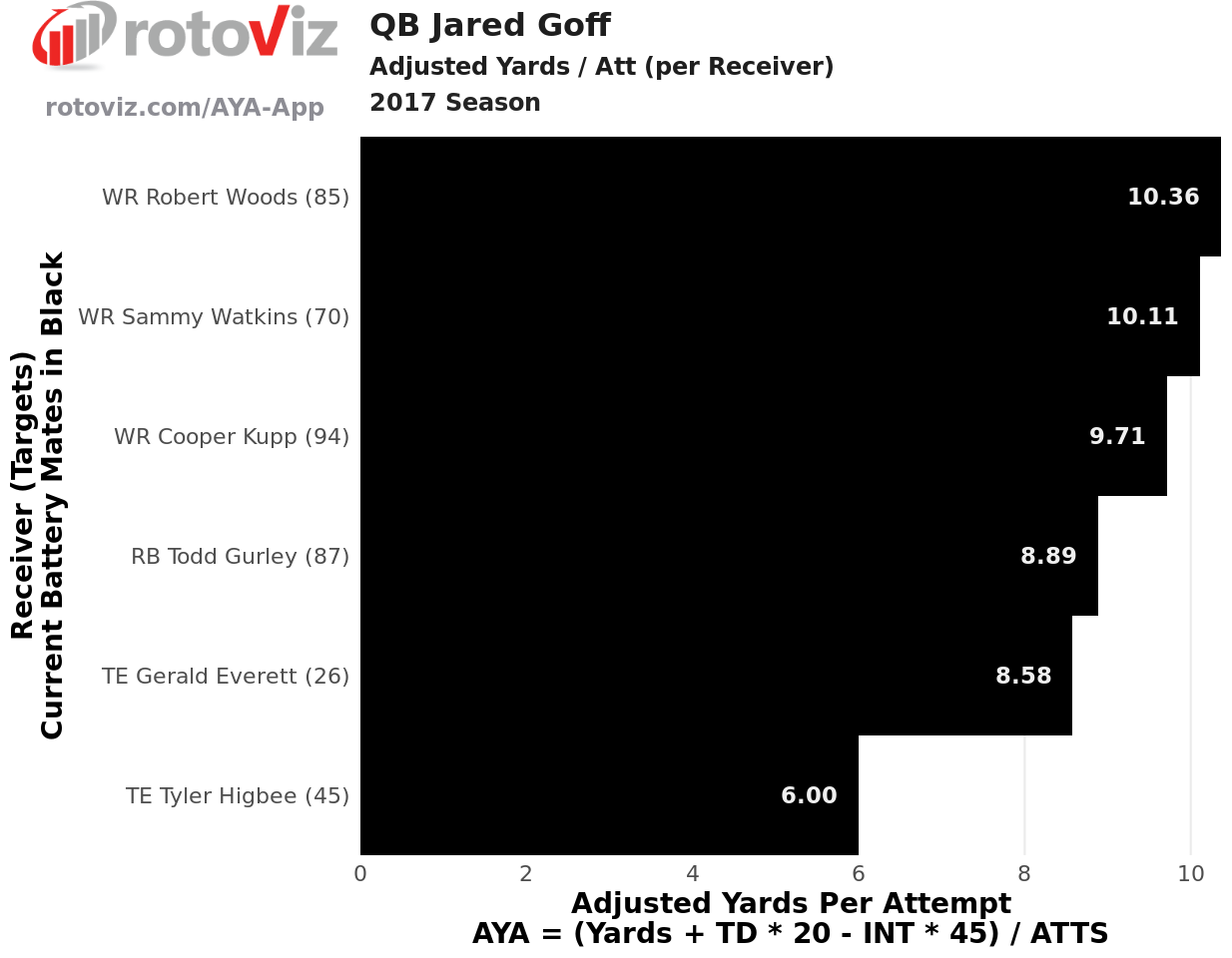 He was productive not only when compared with the Rams other wide receivers but also compared to his past.

The issue for Watkins was volume – it’s hard for a wide receiver to have fantasy value seeing just 4.7 targets per game. Unfortunately, Watkins’ new landing spot isn’t any different.

With Tyreek Hill and Travis Kelce drawing most of the targets, last season’s WR2 Albert Wilson was seeing an average of 4.8 targets per game. Watkins should see an uptick as a superior player to Wilson but it’s hard to see him topping six targets per game. Expect the frustrating inconsistency to continue.

Tyrod Taylor, Jarvis Landry, and Carlos Hyde to the Browns

While Tyrod Taylor looked like a nice addition for the Browns receivers, he’s unlikely to start the entire season after the selection of Baker Mayfield. Taylor could be a nice streamer early in the season against poor defenses, but Mayfield is expected to make starts this season.

Jarvis Landry was phenomenal last season, finishing as WR5. While he’s a great player, a large part of his value came from his 161 targets (tied for 3rd-most last year). He’ll still likely lead the Browns in targets but sharing with Josh Gordon and Corey Coleman, Landry is unlikely to reach last year’s high total. His price will determine whether he’s a value in August drafts.

Jeremy Hill, Cordarelle Patterson, and Jordan Matthews to the Patriots

After carrying the ball 222 times for 1,124 yards (5.1 yards per carry) as a rookie, Jeremy Hill has rushed 482 times for 1,749 (3.6 YPC). Once a prized player, Hill only drew interest from one team – the Patriots. It looked like Hill would compete with disappointment Mike Gillislee and veteran Rex Burkhead, but the addition of Sony Michel has made this backfield even more crowded. Previously Hill looked likely to compete for the early-back role in the Patriots offense, but now he’s looking like a candidate for release.

The Patriots are less crowded at wide receiver. They did trade for Cordarelle Patterson but shipped Brandin Cooks to the Rams. With very limited career production at wide receiver, we don’t expect Patterson to be too heavily involved on offense. C-Patt looks more like a special teams addition and gadget player. The expected top three receivers are Julian Edelman, Chris Hogan, and Malcolm Mitchell. But remember, Malcolm Mitchell didn’t play last season and is still a question-mark from a health standpoint.

Jordan Matthews is a bit underrated at this point in his career. After three productive seasons with the Eagles, Matthews struggled through injuries and a run-heavy offense with the Bills in 2017. Turning 26 in July, Matthews is still young and is an underrated late-round flier.

Jordy Nelson and Doug Martin to the Raiders

The Raiders have spent the offseason collecting older talent. Jordy Nelson has had an incredible career but was pathetically inefficient when quarterback Brett Hundley filled in for Aaron Rodgers last season.

Was it Jordy’s fault or a product of his connection with Hundley? Only time will tell – but Jordy will be 33 years old this season, which is concerning for wide receivers historically. I’d be careful drafting Jordy as his name recognition alone will likely cause him to be overvalued.

Another older player addition in free agency, Doug Martin will turn 30 in January and has been extremely ineffective since 2015. Over his last two seasons, Martin has rushed for 827 yards on his last 282 carries (2.93 yards per carry). Marshawn Lynch will continue to receive the early-down carries and I expect DeAndre Washington and Jalen Richard to share passing downs. Like Jordy, Martin looks overvalued based on name recognition alone.

Frank Gore, Danny Amendola, and Albert Wilson to the Dolphins

The Dolphins are joining the Raiders in signing older players who are in the midst of a decline. Despite being turning 35 years old in May, Frank Gore has received at least 200 carries in every season since 2005. You likely don’t need me to tell you that he’s past his prime. Even if the Dolphins are silly enough to sign him and give him carries, he’s unlikely to have fantasy value.

The Dolphins also signed 32-year-old Danny Amendola. “Playoff Danny” was fantastic for the Patriots last postseason but was hardly a reliable fantasy asset, outside of playoff leagues. Finishing as WR43 on the Patriots last season, Amendola will now share targets from Ryan Tannehill with DeVante Parker, Kenny Stills, and Albert Wilson. Outside of starters Parker and Stills, the Dolphins receivers look unreliable for fantasy purposes.

Michael Crabtree, Willie Snead, and John Brown to the Ravens

After passing for just 20 touchdowns in 2017, the Ravens revamped their receiving corps. Despite finishing as the WR12 in 2016, Michael Crabtree fell to WR30 in 2017. Turning 31 in September, the decline is near for Crabtree. The good news is Crabtree is first in line for targets on the Ravens and should top the 101 looks he saw last season.

After a very promising first two years in the NFL, Willie Snead strangely saw a lack of playing time with the Saints in 2017. Still just 25 years old, Snead is capable of making an impact on a team desperate for targets in the passing game. At the right price, Snead would be worth a flier.

Once in the midst of a promising young career, John Brown has caught 60 passes for 816 yards over his past two seasons. The 28-year-old has struggled to stay on the field, battling a sickle-cell condition. Just a flier at this point, it seems unlikely Brown provides consistent value at this stage of his career.

Dion Lewis to the Titans

Just as it seemed that Derrick Henry had the backfield all to himself, the Titans signed Dion Lewis. Lewis is coming off an excellent 2017 season with the Patriots and is expected to share carries with Henry. Early expectations are that Henry will play early downs while Lewis will receive most of the pass-down snaps.

Currently being selected a third-round pick, Henry looks overvalued. Henry will need to be very efficient on the ground if he continues to see little involvement in the passing game. This is a situation to monitor closely in training camp.

Case Keenum to the Broncos

After struggling through nine starts for Jeff Fisher’s Rams in 2016, Case Keenum broke out for the Vikings last season. Here’s how his numbers compare over the two seasons.

Of course, Keenum was terrible for Fisher’s Rams, the same can be said for Nick Foles and Jared Goff. With solid coaching and great receivers around him, Keenum was able to finish as QB14 with the Vikings. Keenum certainly looks like an upgrade for the Broncos but his inherited weapons are a downgrade from Stefon Diggs and Adam Thielen. It’s hard to imagine Keenum finishing as a top-15 quarterback in fantasy but he should be stream-able against poor defenses.

Eric Ebron to the Colts

A frustratingly inconsistent fantasy player for multiple seasons, Eric Ebron signed with the Colts. Still just 25 years, Ebron has impressive age-adjusted production and is entering a peak season for tight ends. There are plenty of reasons to believe Ebron’s breakout is coming this season.