With his Uncle Rico-like swagger, Gardner Minshew quickly became a fan favorite last year. Nick Foles’ injury gave Minshew the opportunity to show that he is capable of leading the Jaguars to unexpected wins. With everybody seemingly on the hype train last year, it’s very curious to see how late he’s being drafted.

Minshew hit the ground running last year as he finished as the QB19 in fantasy despite only starting 12 games. He compares favorably to the other rookie quarterbacks in his draft class.

Here’s how they compared on a per-game basis.

Minshew kept pace with both Kyler Murray and Daniel Jones last year in all categories. He not only was by far the most efficient, but his TD/INT ratio also led the group.

We get a better representation of Minshew’s performance when we look at his stats when starting. 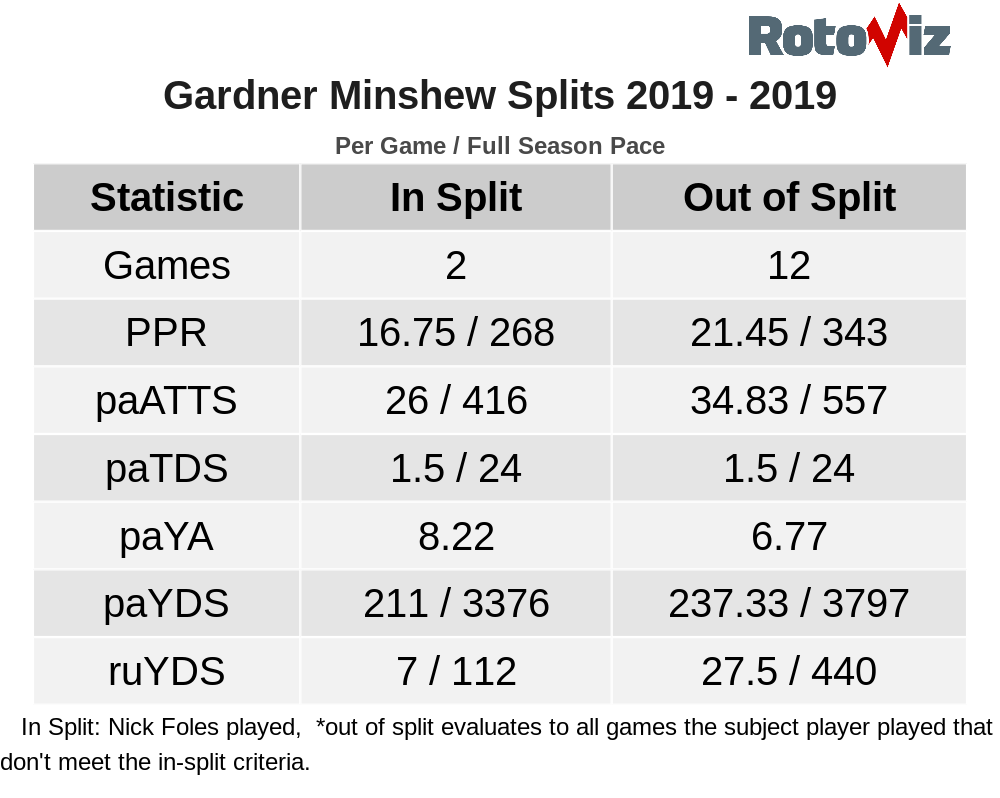 His fantasy points per game when starting was the 8th best among quarterbacks last season.

Despite the relatively impressive passing stats, Minshew thrived as a runner. He finished 5th amongst all quarterbacks in rushing yards. Rushing remains an important stat for fantasy quarterbacks: every single quarterback to finish as a top-10 fantasy QB last year finished in the top-16 of rushing yards amongst quarterbacks. He clearly offers the upside we look for in a fantasy QB.

If offseason personnel moves are any indication, the Jaguars have a lot of faith in Gardner Minshew. They traded away last year’s top free-agent acquisition Nick Foles to allow Minshew to be the starter this upcoming season. To do so, the Jaguars are taking on $18.75 in dead cap money.

While there has been speculation about the potential addition of Cam Newton, this seems unlikely. Draft Kings has the Jaguars as the 9th most likely team to sign Newton at +1200 odds right now.

Jay Gruden was hired as the offensive coordinator for the Jaguars this offseason after being fired from the Redskins at head coach. Gruden is a good offensive mind who has had some underrated passing offenses since becoming an offensive coordinator in 2011 with the Bengals. From 2011 to 2017, each of his offenses finished top-20 in both raw passing and passing efficiency. He had a five-year stretch from 2013-2017 where his teams finished top-12 each year in these statistics.

While Gruden had solid quarterback play from the likes of Andy Dalton and Kirk Cousins, he never really had a true game-changing QB. His offenses sputtered the last two seasons due to a revolving door of quarterbacks including the likes of Colt McCoy, Mark Sanchez, and Josh Johnson. Gruden should be able to implement an offense, that at minimum, doesn’t hinder Minshew.

The Jaguars are returning each of their top five receivers last year and acquired some additional weapons on top of that. They spent the 40th overall pick on stud WR Laviska Shenault. You can argue he is one of the best wide receivers in this class. This will only help this passing offense.

The acquisition of Tyler Eifert was an under the radar move and he should immediately slot into the starting TE role. It wasn’t too long ago that Eifert was one of the best tight ends in the league with elite red-zone chops before injuries suppressed his production. Adding pass-catching RB Chris Thompson adds another weapon for Minshew to work with.

We’ve seen 2nd-year quarterbacks take the league by storm over the past two seasons with the likes of Patrick Mahomes and Lamar Jackson. Is this a trend or a coincidence? 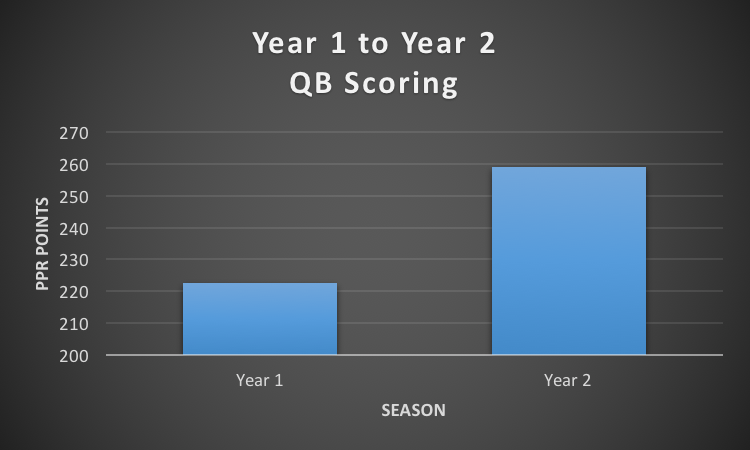 Since 2000, all quarterbacks who started at least 10 games in their rookie season saw an increase in 16.3% in fantasy points the following season. We want to be targeting 2nd-year quarterbacks in fantasy and Minshew fits the bill.

Minshew checks all of the boxes we are looking for in a late-round QB target. He had an impressive and efficient rookie season, has an improved offense around him, has rushing production, and is entering his second season.

He is grossly mispriced at his current best ball ADP of QB26. Expect him to rise as we get closer to football season, but he will likely continue to be a value.