In part 4 of my ADP analysis series, we will discuss the AFC South Division. If you’re interested, here are the other divisions I’ve completed so far: NFC West, AFC West, and NFC South.

All of the sudden, what was once a weak division is now in the running for the strongest in football – especially if Andrew Luck can return to form for the Colts. The Titans might be the most well-rounded team in the division,  loading up on defense in the draft and free agency while setting up Marcus Mariota to fulfill the potential he’s flashed. The most exciting rookie in the 2017 season returns in Houston (along with J.J. Watt), and the most dominant 2017 defense is back in full in Jacksonville. Let’s see what fantasy repercussions the ADP has to offer us for the AFC South:

Derrick Henry, RB, TEN: An elite prospect coming out of Alabama, it seemed like only a matter of when – not if – Derrick Henry would become the centerpiece of the Titans offense, or at least the running game. Trouble was evident last season when the Titans preferred a hobbled Demarco Murray on the field rather than let Henry monopolize the touches.

Optimistic fantasy owners thought 2018 would be the season after the Titans released Murray… but they signed Dion Lewis less than a week later. Those viewing the situation through rose-colored glasses could believe that Lewis is only going to take some 3rd down work and be a change-of-pace, but the game tape and stats back up the fact that Lewis is valuable on early downs as well.

There are reasons to believe Lewis is a serious threat to Henry’s workload.

With a PPR ADP at the 3rd/4th turn, I don’t understand how you can justify Henry’s draft position –  as a player who has caught 24 passes in 30 career games. In addition, it’s concerning that the Titans likely signed Dion Lewis to be more than just a passing down back. There are plenty more running backs with less week-to-week variance and similar upside available a round or two later – including Lewis himself.

T.Y. Hilton, WR, IND: T.Y. Hilton’s career has basically been determined by Andrew Luck’s health. This doesn’t come as a shock to most people, but just how big the difference is can be quite shocking. Here are the splits of games where Hilton has played with and without Luck since their sophomore year. 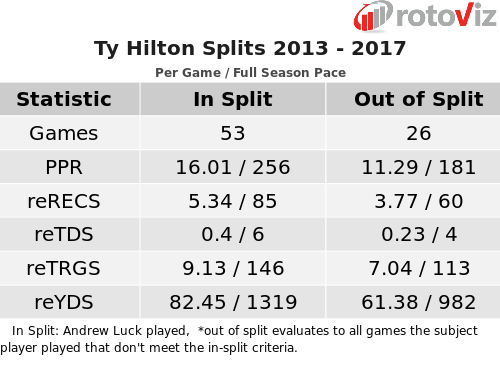 Hilton has also improved every single year he’s been in the league. Take a look at his stats when Andrew Luck plays at least 15 games.

Keep in mind he led the league in receiving yards the last time Andrew Luck played a full season. Luck reportedly looks like himself in practice and should play in the preseason opener. If Luck’s health cooperates, Hilton has top-five upside with a top-ten floor. He is an absolute steal as WR13 in the 3rd round.

Nyheim Hines, RB, IND: A shorter running back on the C.J. Spiller/Tarik Cohen spectrum, the Colts used an early 4th round pick on the NC State dynamo. At 5’8″, Hines’ game is entirely based on speed – take a look at his workout metrics:

After T.Y. Hilton, the Colts are seriously desperate for speed in their offense. Hines is their answer, “lining up everywhere” while beat writers are predicting the Colts will seriously utilize Hines on offense. What really makes Hines interesting is his “jack of all trades” skill set including an 89th percentile college target share, on a Colts team bereft of weapons, and with Andrew Luck healthy, this offense is most likely going to have multiple relevant PPR assets.

The Colts’ other receivers (Chester Rogers, Ryan Grant) are quite uninspiring, and beat writers are reporting that Hines is lining up in the slot. The fresh coaching regime with proven ex-Eagles OC Frank Reich inspires a lot of hope for this offense, and this backfield is as up in the air as any in the NFL with unproven Marlon Mack, perennial goal-line threat Robert Turbin, and fellow rookie Jordan Wilkins. Due to his superior speed and receiving ability (compared to others in the backfield), Hines is a great value at his current 13th round ADP.

Taywan Taylor, WR, TEN: Taylor did not come out of Western Kentucky in 2017 as a household name, but he was a favorite among many draftniks for his Emmanuel Sanders-like game film. A 5’11” receiver who plays much bigger with the ball in the air and plus after-the-catch skills, the Titans spent an early 3rd round pick on him.

Due to a snail’s pace offense and target competition, Taylor saw limited action last year. Albeit in a small sample size, Taylor was the most efficient option Marcus Mariota utilized.

Although Corey Davis was an elite prospect, the list of first-round receivers with injury-riddled rookie years is scary (looking at you A.J. Jenkins, Laquon Treadwell, Kevin White, Breshad Perriman, etc.). Throw in the fact that Rishard Matthews is missing reps in practice and is currently on the PUP, and Taylor’s path to playing time is more direct than meets the eye.

The Titans had a major coaching upgrade going from stone-age Mike Mularkey to young dynamo Matt LaFleur, who spent the last two seasons under Kyle Shanahan and Sean McVay, respectfully. Taylor is a good prospect in his own right with a 92nd percentile agility score and 77th percentile College Dominator rating, and he makes for an ideal flier who is basically free at an ADP of 250th overall.