This is Part II of my eight-part series going division by division and analyzing draft trends, specifically looking at players that are overvalued or undervalued at their ADP, and some late round upside guys to fill your bench with. For Part I on the NFC West, click here.

After years of Bronco dominance (in real life and fantasy) for the first half of the decade, the Chargers and Chiefs have taken major steps in shaking up the division. But the division is full of questions: Can the Chargers finally put it all together and make a run deep into the playoffs? Will Case Keenum and Patrick Mahomes live up to their billing? Can Jon Gruden fix the Raiders (probably not)?

Demaryius Thomas, WR, DEN: Demaryius will always hold a special place in fantasy owners’ hearts due to his absolute dominance in 2013 and 2014. But there are red flags everywhere with his 2018 prospects, starting with his steadily declining production since the aforementioned 2013-2014 dominance:

Every single statistic has been in steady decline for four straight seasons. I suppose a small revival with an overachieving Case Keenum at the helm is possible, but Thomas, unfortunately, doesn’t have a high ceiling. Last season, he had 3 games over 71 yards, one over 100, and zero games with multiple touchdowns. The Broncos drafted Courtland Sutton as the future at wideout, and Emmanuel Sanders is back yet again as a cheaper option.

He’s now on the wrong side of 30 with almost zero after-the-catch skills left. All of the guys being drafted around him have a much higher ceiling (Allen Robinson, Josh Gordon, and JuJu Smith-Schuster). In the 4th round, you should still be seeking upside. If a guarantee of 4th place is what you’re looking for in your fantasy league, Thomas is the player for you. You need to take risks and go for upside if you want to win, and Thomas is no longer a league-winning player.

Sammy Watkins, WR, KC: After flashing elite production with the Bills, Watkins was traded to the Rams basically on the eve of the 2017 regular season. With little time to learn the offense, Watkins was mostly used as a downfield weapon to help clear out the middle of the field for Robert Woods and Cooper Kupp to get the higher-probability targets.

However, he still put up some excellent efficiency metrics. He might’ve only been WR40 on the year, but considering he saw only 70 targets (T-59th in the league) his fantasy points per target was elite.

If he even keeps up a smidge of that efficiency (something he has done throughout his career), he will be a value at his current late 5th/early 6th round ADP. The Chiefs made Watkins the highest paid wide receiver in the NFL (in terms of guaranteed money per year), and they will use him as the 1B (at worst) to Tyreek Hill’s 1A. It’s not entirely out of the question Watkins out-targets Hill either, and Watkins will be the preferred red-zone weapon as every single one of Tyreek Hill’s last 13 scores have come from 30+ yards away. Hill also only drew 4 red zone targets last year, while Watkins scored eight touchdowns on 70 targets.

With aggressive, rocket-armed sophomore Patrick Mahomes at QB, Watkins’ pedigree, contract and red-zone chops make him a cheaper alternative (and possibly even superior in a vacuum) than Tyreek Hill to get involved on an exciting Chiefs offense.

Tyrell Williams, WR, LAC: After an incredibly promising 2016 which saw him finish as the overall WR18 with a 69/1,059/7 split in Keenan Allen’s absence, Tyrell Williams disappointed to a WR43 finish in 2017. But as the table in the Sammy Watkins section shows, Tyrell Williams was still incredibly efficient (8th in FPs/Tgt among the top 50 PPR WRs). This efficiency is further illustrated in the Adjusted Yards Per Attempt metric, showing how effective Philip Rivers’ targets have been depending on the receiver. 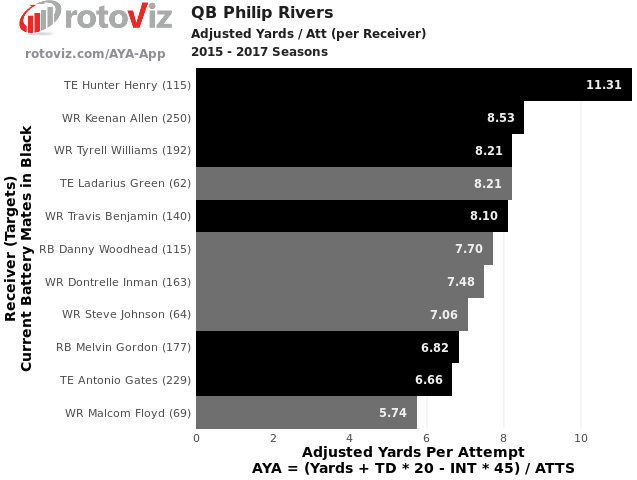 While Hunter Henry’s ACL tear is a big blow to Rivers and the Chargers in general, it opens up a lot of targets for other players. Mike Williams’ lost rookie season falls into a dangerous correlation of rookie year injury/ineffectiveness and bust status. Travis Benjamin is more of a return-man and gadget player and was out-snapped by 18 snaps per game by Tyrell Williams last season.

Keenan Allen most likely reached his reasonable target ceiling (159) in 2017, leaving a major vacuum that Williams has shown he can fill. With an ADP in the 14th round, Williams is a no-risk, high reward player that should at worst be a solid bye-week ceiling play.

Patrick Mahomes, QB, KC: Apparently trading up to take Mahomes in the 1st round of the 2017 draft lit a fire under a previously risk-averse Alex Smith. A more-aggressive Smith ended up as the QB3 last season, but the Chiefs knew the future was in the rocket-armed, downfield-minded Mahomes and traded Smith this offseason.

Under the exact same system that allowed a less-talented Smith an elite 2017 fantasy season plus adding Watkins, Mahomes is a prime breakout candidate. He has a full year of practice and observation under his belt and showed excellent poise in his lone 2017 start (Week 17). There is a lot of ADP incongruity with the Chiefs: by definition, if Hill, Kelce, and Watkins all live up to their ADP, Mahomes will be a top-tier fantasy QB.

Mahomes can easily be this year’s Carson Wentz or Deshaun Watson. With an 11th round ADP as QB16, you are getting massive upside with a small level of draft capital investment. Load up on WR/RB talent early, and draft Mahomes on your way to a championship.