In Part 5 of my ADP analysis series, we will discuss the NFC North Division. If you’re interested, here are the other divisions I’ve completed so far: NFC West, AFC West, NFC South, and AFC South.

The longtime NFC South kings in Green Bay were overthrown by the Vikings last year, who open up as one of the Super Bowl favorites. But the Lions are always in the playoff race, and the Bears look like they’re back from the depths of the conference with a brand new, innovative coaching staff and re-tooled offense.

Which players should we be targeting and avoiding in fantasy drafts?

Jamaal Williams, RB, GB: While it is appealing to target the (for now) lead back on an explosive offense like Green Bay’s, Jamaal Williams is not worth his 7th/8th round ADP. Let’s start by comparing him with his main early-down competitor, Aaron Jones:

Not only is Aaron Jones a superior prospect, but he had only 106 fewer yards on a whopping 72 fewer carries and as many rushing touchdowns as Williams. Let’s also not forget that it was Jones – not Williams – who got first crack at lead-back duties when Ty Montgomery went down last season.

It seems that Ty Montgomery will be again working as the third-down back this year, rendering Williams and Jones to fight it out for the majority of carries. While Jones is suspended for the first two games of the season, it’s unlikely that as the more effective back, he’ll be completely rendered to the bench after his return.

It might be a headache of a running back committee in Green Bay, but if you’re going to take a gamble why are you drafting the least effective, most expensive option? Take Aaron Jones two rounds later if you want to take a stab at the Green Bay backfield.

Randall Cobb, WR, GB: After breaking out as the overall WR8 to the tune of a 92/1,287/12 line in 2014, injuries and being miscast as a top-tier real-life WR resulted in disappointing fantasy performances the next two seasons. But there are positives: not only did he squeak out a WR36 finish last year with Brett Hundley at the helm, the Packers chose him over the esteemed Jordy Nelson for the 2018 season. And he is among Aaron Rodger’s top career targets, combining massive volume with amazing efficiency for a slot receiver: 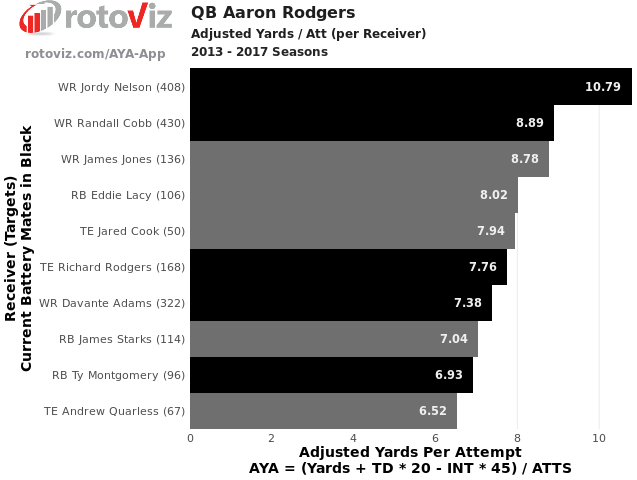 The Packers waited until the 4th round of the 2018 draft to take receivers, and did not make any big signings this off-season besides Jimmy Graham – who accumulated a mere 520 yards to go along with a putrid 9.1 yards per catch while playing with Russell Wilson.

Cobb’s history and rapport with Rodgers combined with his 8th round ADP make him an excellent mid-round target. His mid-WR1 days are likely over, but a top-20 finish is far from an unreasonable expectation.

Anthony Miller, WR, CHI: After a prolific college career at Memphis, the Bears realized that simply signing Allen Robinson was not enough to improve upon their pathetic receiving corps and give young Mitch Trubisky a chance on the NFL gridiron. Enter 2nd round pick Miller, who is a solid prospect with an 89th percentile SPARQ score and an 80th percentile College Dominator Rating (thanks PlayerProfiler).

The new-look Bears are ready to turn the page. Gone are stone-age football minds like John Fox and Dowell Loggains, and in are Matt Nagy and Co. – who learned under the always-innovating Andy Reid in Kansas City. Nagy helped make Alex Smith a top-tier fantasy quarterback last year and with quarterback production will come receiving production.

Miller is already turning heads in training camp and has much more of a history as a volume receiver than screen/fly specialist Taylor Gabriel. With an ADP in the 15th round, snag Miller while your opponents are wasting picks on defenses.

Kenny Golladay, WR, DET: Although Golladay flashed as a third-round rookie in Week 1 of 2017 with a 4/69/2 line, soft-tissue injuries clouded what was likely to be a promising rookie year. Golladay is still an elite prospect as a 6’4″, 218 lb beast with 4.5 flat speed (92nd percentile in Height Adjusted Speed Score) and an 84th percentile College Dominator Rating.

While Golden Tate is locked into a high-volume slot role, there are going to be some targets up for grabs behind Marvin Jones (a lower-volume jump ball specialist who has never eclipsed 107 targets despite missing just 1 game since his rookie year) with the departure of Eric Ebron.

Golladay has also drawn rave reviews in training camp, even from Tate himself. He can carve out fantasy relevance being the 2B to Jones’ 2A, but if Jones or Tate get hurt? Watch out. He’s a high upside flier at his 12th round ADP.