In part 3 of my series, I will take a look at the ADPs of players from the NFC South. Click here for the NFC West, and here for the AFC West.

The 2018 NFC North is looking to be one of the toughest divisions in all of football. With three teams with 10+ wins last year, each team (at least on paper) has seemingly improved or held steady this offseason. The Saints still have Brees and Co., while the Falcons and Panthers added exciting first-round wide receivers. Can the Bucs overcome a Jameis Winston suspension to fully utilize their plethora of offensive weapons? Let’s see what all this means for fantasy purposes:

Christian McCaffrey, RB, CAR: For what it’s worth, I think McCaffrey is a great player and a fantasy asset – I just think his mid-2nd round ADP (17th overall) is getting a little out of hand. But the hype train is in full swing after a 80/651/5 receiving line while also putting up a 117/435/2 rushing line and an RB9 PPR finish.

McCaffrey is certainly going to remain heavily involved in the offense – maybe even their 1A or 1B. I just think he came closer to his ceiling last year than many drafters realize. He certainly cannot do much better on the receiving end (3rd in RBs among catches, 5th in yards, tied for 2nd in TDs), so you’re counting on more rushing output. This was all good and well (despite his struggles between the tackles last year) until the Panthers signed C.J. Anderson – a between the tackles grinder with passing game chops of his own.

That signing is a blow to McCaffrey’s workload potential – he may even be behind Cam Newton and Anderson for goal-line work as well. Throw in the fact that the Panthers are down two of their top offensive linemen (Daryl Williams to a knee injury and Andrew Norwell to free agency) and there are red flags galore for McCaffrey’s rushing output potential.

There’s even concern for his receiving volume. His 113 targets (tops among RBs) were in the context of a major Greg Olsen injury, a Curtis Samuel injury, and a Kelvin Benjamin trade. Not only are Samuel and Olsen back, but the Panthers invested a 1st round pick into uber-stud D.J. Moore to pair up with a blossoming Devin Funchess. That is quite a lot of mouths to feed.

McCaffrey will certainly be good this year but I just can’t justify him going before Devonta Freeman, Jerick McKinnon, and Joe Mixon – all guys who will come close to monopolizing their backfield this year. Skip him in the 2nd round.

Ronald Jones, RB, TB: To forecast Jones’ rookie year, I decided to take a look at all Day Two (2nd-3rd round) RBs drafted from 2015-17 and see how their rookie years fared in terms of opportunity.

The numbers don’t jump off the page, but at closer analysis these numbers are promising for Ronald Jones. With the exception of Tevin Coleman, all of the running backs who only had single digit touches their rookie year as a 2nd-day pick were drafted to teams who already had an established back (Demarco Murray, Thomas Rawls, Jay Ajayi, Le’Veon Bell, and Lamar Miller).

The other RBs on that list, who did not have established competition, found ample opportunity their rookie seasons. Jones’ only competition for early-down work? Peyton Barber, who was an undrafted free agent in 2016 and is an inefficient plodder.

Beat writers are already reporting that they see Jones getting 15-20 touches per game this year, which would almost guarantee him outdoing his late 5th round (RB27) ADP. After being selected 38th overall, Jones is also the highest draft pick among the players above (except for Yeldon). It is pretty clear that when NFL teams take an early RB who doesn’t have established competition, they give them the benefit of the doubt as far as on-field opportunity. Jones is a great target in the 5th/6th round, especially for owners employing a “Zero RB” strategy.

Ben Watson, TE, NO: Watson is probably the least sexy and exciting pick you can think of, but he’s as good of a late-round TE as they come. Last time Watson caught passes from Drew Brees, he finished the year with a 74/825/6 receiving line as the overall TE6. Last year, he somehow came back from an Achilles tear to lead an (admittedly weak) Ravens receiving corps in catches and is back in New Orleans to replace Coby Fleener.

Cameron Meredith may be there to take up some middle-of-the-field targets, but he suffered a catastrophic knee injury last season and is a bit of a question mark. Watson still has skills, and he is basically free with a 15th round ADP as TE23. He is an excellent addition to any squad with a weak TE1 or an injury-prone one such as Rob Gronkowski or Jordan Reed.

D.J. Moore, WR, CAR: My esteemed colleague Mike Braude has already written about Moore, but he falls into this category as a low-risk, high-reward depth pick. Not only was Moore the first receiver off the board during the 2018 NFL Draft, but he profiles as an elite prospect: 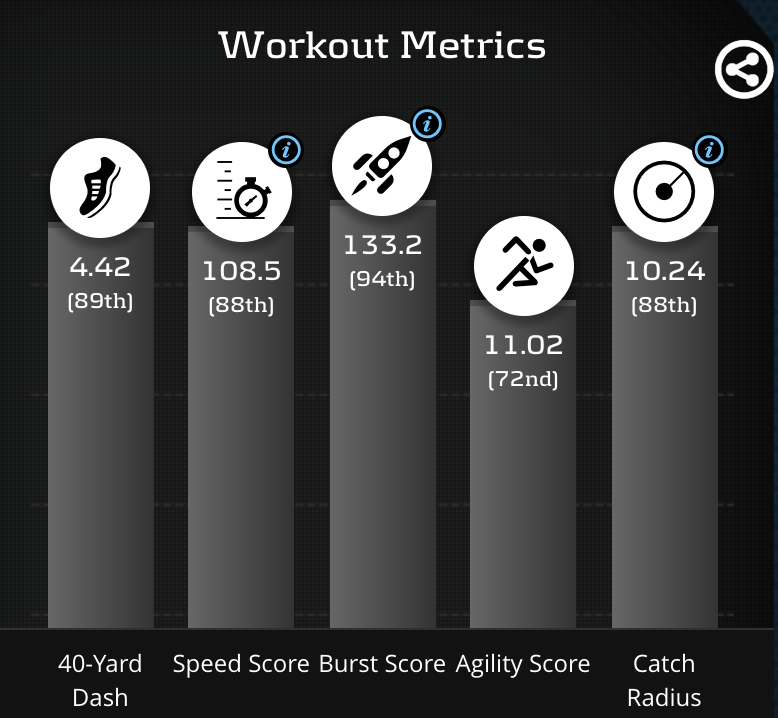 Check out Braude’s article above for more on just how elite of a prospect Moore is, but what truly makes him a “lottery ticket” is his ADP. Similar to the aforementioned McCaffrey, there is a lot of target competition in Carolina but he doesn’t come with McCaffrey’s price tag.

Going off the board in the 11th round, Moore has the highest upside of any pass-catcher in what should be a very good Panther offense. There is almost always at least one or two rookies every year who finish as WR1s or WR2s, and Moore is my odds-on favorite to finish as the top rookie wideout.