Most seasons there are league winning running backs that can drafted even in the late rounds. Last year, Knowshon Moreno, Zac Stacy, and Danny Woodhead are a few examples.

Here are some potentially overlooked running backs this season:

It’s likely that Jonathan Stewart has burned all of the readers of this article in the past. It’s probably the recency bias that keeps him undervalued but perhaps we’re overlooking him here. He is (or maybe was) an athletic freak who holds one of the highest athleticism scores on PlayerProfiler.com.

He’s already proven himself in the NFL with 21 touchdowns over the first two seasons of his career. Since then, he’s routinely disappointed us. Now, he’s literally free, going undrafted in Apex drafts despite being four years younger than starter DeAngelo Williams. Coach Ron Rivera believes he can be “dynamic” if healthy.

Dexter McCluster was a guy that I had my eye on before the Titans drafted rookie Bishop Sankey. ESPN Titans reporter Paul Kuharsky suggested he would fill the Danny Woodhead role in Ken Whisenhunt’s offense. We all know he was a valuable late round RB pick last season.

There’s a chance that Bishop Sankey struggles with blitz pickup and Dexter McCluster becomes the 3rd down back. With over 50 receptions in each of the last two seasons, he’s probably a better fit for the job at this point.

Running ahead of Stepfan Taylor in the Cardinals 2nd preseason game, it’s possible that Dwyer will be the Cardinals big back. Last season Rashard Mendenhall handled that role and finished with eight touchdowns.

The Cardinals could have an effective offense this season with Michael Floyd ascending and Andre Ellington seeing more touches. It appears that the Cardinals don’t trust Ellington at the goal-line, Dwyer could potentially be productive as a touchdown vulture.

Often overlooked after the arrival of Chris Johnson, it’s still possible that Chris Ivory is the best running back on the Jets. He’s never rushed for fewer than 4.6 yards per carry in a season and also figures to be the Jets goal-line back.

Ivory is also two years younger than Chris Johnson, who hasn’t rushed for over 4.6 yards per carry since his 2nd season. I expect Johnson to play a lot of pass downs, while Ivory sees the early down work.

When drafting a player in the Broncos backfield behind Montee Ball, fantasy owners seem to jump to C.J. Anderson. Anderson would probably be involved if Ball went down but I would expect Hillman to take over the passing game. After watching Knowshon Moreno last season, we know how valuable a running back can be while catching passes from Manning.

In fact, an argument can be made the Hillman is already a superior passing down back to Montee Ball. Using RotoViz’s Game Splits app, I compare their efficiency in the passing game: 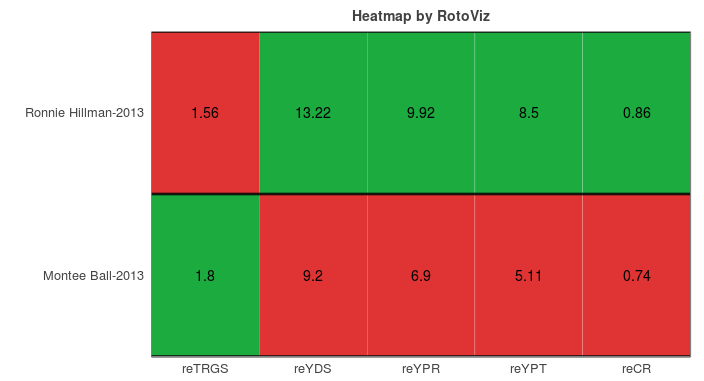 Hillman received fewer targets but was more efficient by every measure. He averaged more yards per reception, more yards per target, and caught a higher percentage of his targets. Perhaps he could have value even without a Montee Ball injury.

I’m with you on Hillman possibly having standalone value. People forget he was supposed to be the guy at RB going into last season. If he can keep his fumblitis from returning, he could be worth the flier.