In the world of PPR, backs who don’t catch passes are often overlooked. They have to earn their fantasy points the hard way, 10 yards at a time with the occasional touchdown. I’ve decided to look at three popular power backs with passing-game roles ranging from unknown to decidedly nonexistent.

All of these guys are average athletes. Short and stocky with limited straight-line speed and low Freak Scores (Stacy tops it at 47), these guys win with vision, quick feet, bursting through the line and breaking tackles.

To make things interesting I decided to examine many aspects of their game and ranked them on each one Olympic Games-style, like a decathlon for running backs. We’ll make it a contest: every 1st place finish in a category gets 3 points, a 2nd place finish gets 2, and a 3rd place finish gets one. Let’s see who can take home the gold.

1. Zac Stacy has some interesting backups (Tre Mason and Benny Cunningham) but is ultimately the bell-cow on a Jeff Fisher team that is going to play ball control offense. Their passing game is still a huge question mark, and they showed their plans by drafting Greg Robinson second overall. Make no mistake- Stacy is the man in St. Louis.

2. Afred Morris has the early downs and has no threat to lose that. However, he is not a fit for Jay Gruden’s pass-heavy offense. The Redskins running back personnel and roles haven’t changed, but the usage is going to.

3. Ridley’s 2013 fumbling issues and subsequent benching are infamous, and we know Belichick is not afraid to pull the plug on him. Add in the James White wild card, and Ridley’s leash is still likely short. But it is encouraging that they didn’t sign or draft another early down bruiser.

1. Zac Stacy. Neither Ridley or Morris are going to be the key cogs in their respective offenses every game. Although this isn’t saying much, Stacy is also going to catch more passes than both of them. The Rotoviz Sim Score Projection agrees:

2. Ridley’s ceiling is capped by his lack of passing down work and the Patriots game-specific offensive plan. He could flirt with 280 carries and is likely for double-digit scores though.

3. Morris has the same issues as Ridley, but is just in a less proven offense. We must knock him down for that.

1. When it comes to bang for your buck, Ridley is clearly your man. With a late 6th round ADP, you can load up on wide receivers and still get a huge value. I’m having a hard time understanding why his ADP is three rounds later than Morris’.

2. Stacy is somehow going after Morris sometimes- a crime considering how undervalued he actually is. Like really undervalued.

3. Alfred Morris’ ADP is likely an example of people paying for past production and not making room for the likelihood that Morris probably reached his statistical ceiling his rookie year. He should never be going before Stacy, and I could convince myself to even take Ridley over him in a vacuum.

1. Stevan Ridley takes the cake here. The Patriots, minus Gronk, were still 3rd in the league in points scored last year. Tom Brady is still Tom Brady. And they are not afraid to run the ball in the red zone, finishing 3rd, 1st and 2nd in rushing touchdowns the past three seasons. Take a look at how much Gronk’s return is going to help: 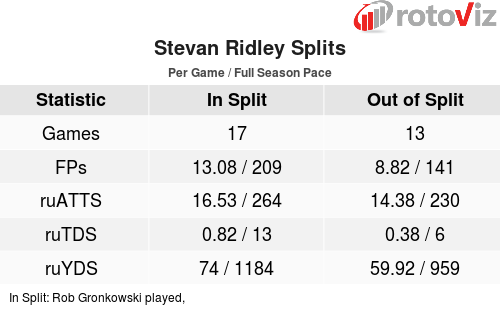 2. Alfred Morris is on a possibly explosive offense, but Jay Gruden’s teams simply don’t score a huge amount of rushing touchdowns. During his tenure in Cincy, the Bengals finished 21st, 18th and 13th in rushing touchdowns. He’ll be the goal line back when they get to the end zone, but it remains to be seen how effective this Washington offense will be.

3. Zac Stacy is his entire offense, which is a good and bad thing. You want an offense’s best player on your fantasy team, but when he is your best offensive player, your supporting cast cannot be that strong. Considering the divison they’re in as well as their (again) huge question marks at quarterback and receiver, Stacy is likely to have a few 20-89-0 statlines.

1. Zac Stacy is the player likely to have the most consistent week-to-week numbers, and it isn’t close. It would be an absolute shock if he ever got under 15 carries in a game in my opinion. Considering the Rams have a very solid defense, the offense should be able to run the ball for a large chunk of many games.

2. Alfred Morris and Stevan Ridley are both going to be inconsistent. They are both going to get clock-killing and goal-line work, but the edge goes to Ridley over Morris again. The Redskins are likely to go pass-heavy almost no matter what, while the Patriots game plan changes week to week. Another way Ridley wins is because of the Patriots defense, which has the potential to be dominant and thus keep the running game in play the entire game.

3. The Redskins, at least on paper, do not look to be much improved on defense. In a division with Tony Romo and Dez Bryant, a Chip Kelly scoring machine, and a re-motivated Giants offense under Ben McAdoo, and there may not be many blowouts for Alf to run the clock out.

The judges have decided: Stacy takes the gold with 12 points by a hair over Ridley, who managed a solid 11. Morris takes the consolation bronze with a mere 7 points.

Again, I don’t understand Alfred Morris’ 3rd round ADP. It’s not like his pass catching role is in question- it is simply nonexistent. He’s not the centerpiece of his offense like Stacy, and doesn’t have the supporting cast and touchdown opportunity that Ridley’s got. Unless he falls maybe even to the 5th round, I’m never touching Alf.

As far as Stacy vs. Ridley goes, that all depends on your draft position and what strategy you are playing. Doing Zero RB? Ridley is probably your man, as he’s available later. Going RB-RB-RB? Stacy should be in consideration. You could even end up with both doing Best Player Available. I’ll be satisfied with either on my team in 2014.