Our fearless leader Mike Braude went over some standouts from the first week of the preseason last week, and this week I’m going to be analyzing the most honest form of response from the fantasy football community: changes to the average draft position (ADP). 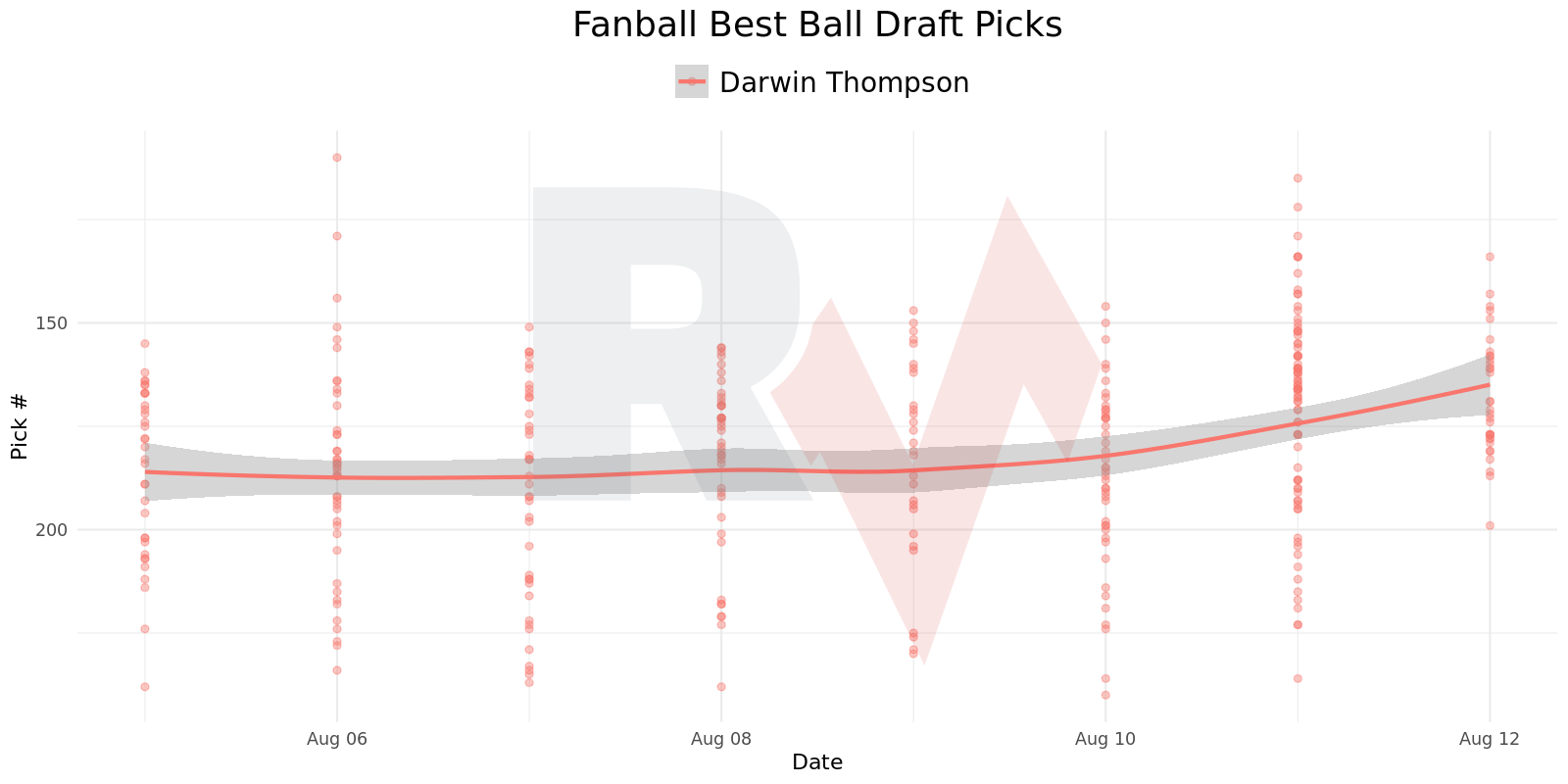 As a 6th round rookie, Darwin Thompson has evolved from being a sleeper with a dedicated yet small following to the talk of the NFL preseason. With plays like these in an explosive Kansas City Chiefs offense, it is easy to see why:

Incumbent and de facto started Damien Williams has never eclipsed 50 carries or 23 receptions in a season, so skepticism about his potential for being a true feature back is warranted.

When analyzing his ADP, it is important to note that Thompson has gone from being basically free in many fantasy drafts to now having a pricetag as early as the 10th-11th round. Is it worth it?

If you’re taking him over low-upside guys such Carlos Hyde, Ito Smith, and Peyton Barber, I can get on board – especially if you have a strong stable of RBs by the time the double-digit rounds arrive. In fantasy football, you need to take risks – you get nothing for coming in 4th, and Darwin Thompson is an exciting player on the league’s best offense behind a questionable incumbent back.

I wouldn’t take him in the single-digit rounds or over guys like Matt Breida, LeSean McCoy, or Kalen Ballage, but Thompson is the perfect RB4 for your fantasy squad as early as the late 10th round – just don’t forget to contextualize the hype around him.

While Duke Johnson hasn’t had any jaw-dropping preseason highlights, his ADP has risen the most out of any player in the NFL the past week. After the Browns turned to Nick Chubb as their lead back and signed Kareem Hunt, a disgruntled Duke Johnson finally found his way out of Cleveland and to the Texans, who just released D’Onta Foreman and had pretty much nothing behind Lamar Miller.

As the great Evan Silva points out, the fact that Houston gave up a 4th rounder (that can turn into a 3rd) for Johnson is cause for excitement:

The compensation #Texans parted with for Duke Johnson in this running back climate is in line with a starter. Not a passing-down/change-of-pace guy.

Let’s not forget that Duke Johnson has averaged nearly 60 receptions per season during his career, and had 74 catches in 2017. Lamar Miller, on the other hand, averages under 30 catches per season and has never even eclipsed 45 targets in a season in Houston.

On an offense that has precious little (especially with the Keke Coutee injury) behind DeAndre Hopkins and Will Fuller (when he’s even on the field), there are plenty of targets to go around in this top-tier offense.

Duke Johnson’s ADP has soared from the 13-14th round to the 8th round – a meteoric rise. However, it’s probably worth it. Duke Johnson is going to be a real candidate for leading the Houston backfield in scoring, as Lamar Miller is one of the least exciting starting RBs in the league.

He likely belongs just below – if not on the same tier as – Austin Ekeler, Darrell Henderson, Kareem Hunt, and Royce Freeman. I would certainly take him over guys like McCoy and Ronald Jones. He makes the perfect RB2/3 on a Zero RB team.

After a relatively disappointing rookie year, James Washington was a slight post-hype sleeper guy after Antonio Brown left the Steel City. This hype, however, was derailed by the signing of Donte Moncrief who is now the assumed starter opposite JuJu Smith-Schuster.

Now, the hype train just might be back on the tracks with a 4/84/1 preseason showing:

James Washington made some plays last preseason. Starting off his second season with a big gain on the #Steelers first drive pic.twitter.com/9w443NLYwB

Similar to Darwin Thompson and Duke Johnson, Washington is stuck behind a veteran who has proven to be mediocre time and time again (Moncrief). However, the Steelers are at a bit of a crossroads without Brown and have legitimate questions to answer about how explosive they can be without him as Big Ben ages.

Are they going to lead the league in pass attempts again? If they do, can Moncrief/Washington handle the load, or are they going to resort to a shorter passing attack utilizing guys like James Conner and Jaylen Samuels?

Washington’s price tag is beginning to creep into the 9th round, which is probably too rich for my blood – especially when he’s being drafted near guys like Curtis Samuel, Dede Westbrook, and Marvin Jones. At that point in the draft, you need to be drafting guys who have a bona fide chance of finishing with at least the second-most targets on their team. Washington simply doesn’t seem to be that guy. I don’t mind him as a WR5/6, but you’re probably asking for trouble counting on him as your top bench guy for bye weeks.