Supply and demand almost universally dictate resource distribution, and the NFL draft is no different. In what projects to be a historically good class of wide receivers, some players who would normally go in the 1st round will likely fall to the 2nd or 3rd.

Jalen Reagor’s name has been thrown around as a possible late Day 1 selection, but most mock drafts exclude him from the top 32 picks. After a very interesting career at TCU, is it possible he is being underrated? Let’s take a look.

Career At TCU: Carrying An Offense

Although TCU has historically been an upper-echelon offense, the days of Andy Dalton and Trevone Boykin were long gone by the time Jalen Reagor became a Horned Frog. This is one reason why Jalen Reagor doesn’t immediately pop off the screen as an elite prospect: his raw statistics are nothing to write home about.

Here is a quick synopsis of his college career:

TCU ranks 52nd (out of 130) in the FBS in passing offense, and Jalen Reagor leads his team in receiving yards (576) and receiving touchdowns (8) as a true freshman. This is incredibly important, as wide receivers who break out when they are young project incredibly well to the NFL.

TCU again falls, this time to 90th, in passing offense. Reagor’s raw statistics take a big hit: 43/611/5. Nonetheless, he still has 33 percent more catches 40 percent more receiving yards than the 2nd best receiver on the team and is tied for the team lead in receiving touchdowns.

All in all, Reagor was making pretty delicious lemonade out of some very mediocre lemons during his time at TCU. He produced admirably with below-average quarterback play and absolutely dominated when one contextualizes his stats as a percentage of his team’s receiving production.

This stat from Pro Football Focus underscores just how much of a liability the TCU QBs were.

That ranked 118th among 120 wideouts. pic.twitter.com/GH4bFH32Xy

After a sneakily excellent career at TCU, Reagor proceeded to have a solid combine. We would’ve liked to see him with a better agility score but his leaping ability more than makes up for it. Here’s his athleticism brought to you from our friends at PlayerProfiler.com. 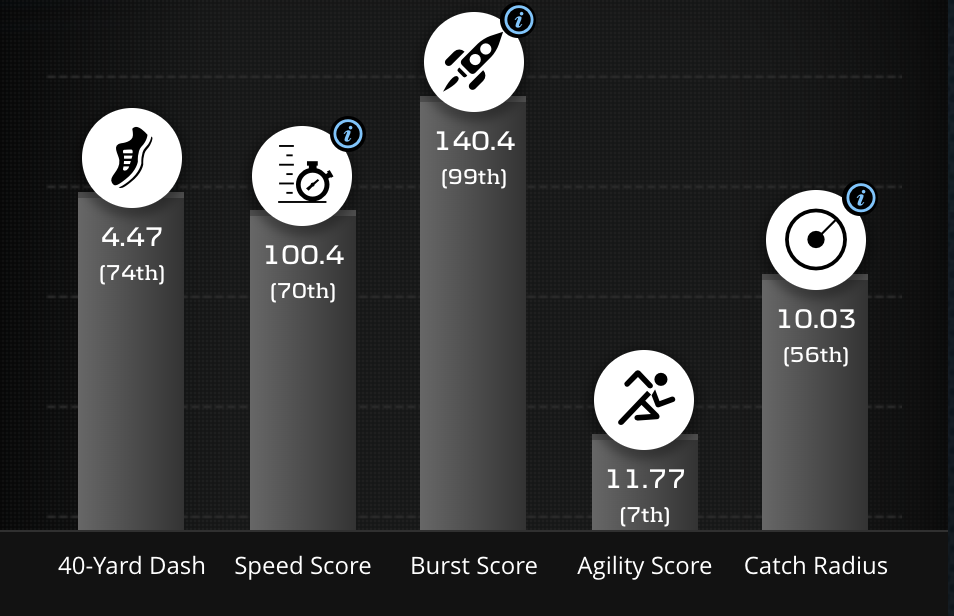 With an above-average 4.47 40-time and an elite Burst Score, Reagor confirms his on-field dominance with his combine numbers.

Let’s combine these measurements with his production at TCU using Rotoviz’s Box Score Scout to see which players he compares closest to. Using GrindingTheMocks.com‘s projection, I entered 38th overall as Reagor’s draft position.

Undoubtedly, a pretty impressive list when it comes to comparables. While there are a couple “misses” here such as Justin Hunter, Brian Robiskie, and Donte Moncrief, the upside here is undeniable. Of his nine most comparable players, four (Randall Cobb, Robert Woods, Michael Thomas, and Chris Godwin) have had WR1 seasons, and Brown is one of the most exciting young stars at the position.

All in all, Jalen Reagor screams first-round pick (indeed, we here at Apex project him to go 25th overall). He checks nearly all the boxes: early declare, broke out as a true freshman (95th percentile Breakout Age), huge percentage of his team’s receiving yards (73rd percentile Dominator Rating), weighs over 205 lbs, 99th percentile burst score and a sub-4.5 40 time.

If the depth and quality of this wide receiver class was not so epic, he would be being discussed as a likely top-20 pick. However, it is looking entirely likely he falls into Day 2 of the draft. At worst, he seems like he would be a top-tier WR2 on an elite passing offense, and would probably slot in as the WR1 on a large number of teams at this very moment.

Jalen Reagor is a future stud wide receiver, and dynasty league owners (join one on Apex today!) should be salivating at the thought of drafting him onto their squads.