Before the 2019 college football season, no NFL scouting departments would’ve anticipated Justin Jefferson as a potential top selection. But after playing an indispensable role in LSU’s record-setting championship season, Jefferson is suddenly shooting up draft boards.

Indeed, it now appears unlikely that Jefferson even makes it out of the top-25 picks. Is he an elite NFL wide receiver prospect? Let’s dive into the analytics to evaluate Jefferson as a prospect.

Before Joe Burrow, the last competent passing quarterback LSU had was JaMarcus Russell (no, Zach Mettenberger does not count). This has thrown a wrinkle into the process of evaluating LSU wide receivers – is their lack of elite raw production due to their lack of ability or their quarterback play and offensive system? Sometimes they were clearly underutilized (Odell Beckham, Jarvis Landry) or sometimes they simply weren’t that good (Malachi Dupre, Rueben Randle, Brandon Lafell). How did Justin Jefferson’s time in Baton Rouge pan out?

LSU ranks 84th in passing offense (out of 130 FBS teams) while Justin Jefferson catches zero passes as a freshman.

Joe Burrow’s first year on campus sees an improvement in the passing game as LSU finishes 66th in passing offense. Jefferson is the clear alpha dog, leading his team in catches (54), yards (875) and receiving touchdowns (6). He has 31 more catches, 512 more yards, and 3 more touchdowns than the runners-up. This is his breakout season, as his Dominator Rating (percentage of team’s receiving yards) is over 29%.

Joe Burrow sets multiple college football passing records as LSU finished second in the nation in passing offense. Super sophomore Ja’Marr Chase is the breakout star posting an insane 84/1,780/20 in 15 games, but Jefferson helps form a dynamic duo with a 111/1,540/18 line of his own.

Justin Jefferson was certainly lucky to be able to play with Joe Burrow in 2019, but his production during his sophomore season is arguably more important. He showed he could be the best receiver on an SEC offense that was showing signs of improvement. There’s no doubting his junior year was more impressive, but Jefferson’s 2018 puts him on track to be a promising NFL prospect.

Jefferson was a very pleasant surprise at the NFL combine, dashing to an 86th-percentile 4.43 40 time. 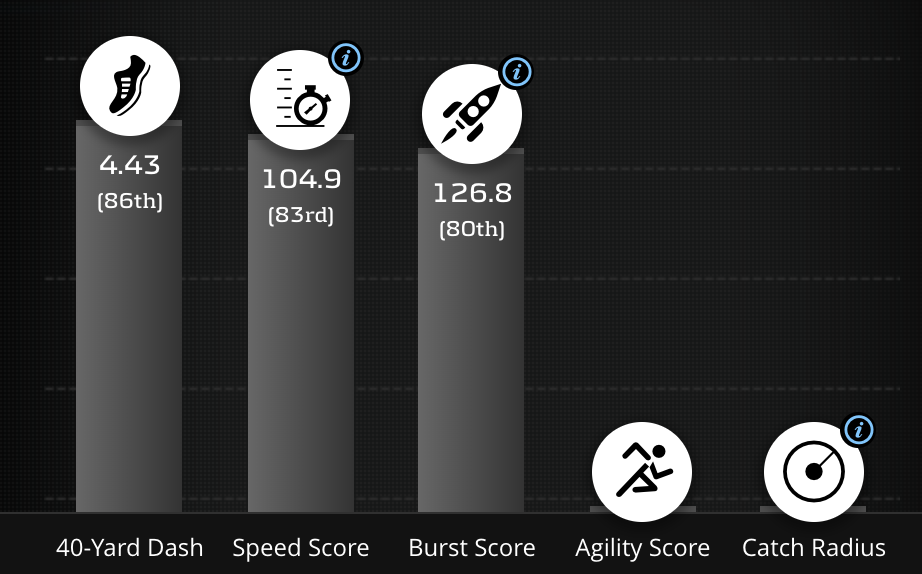 Jefferson is clearly an above-average athlete – he is in at least the 80th percentile of every measurement available.

Let’s combine these measurements with his production at LSU using RotoViz’s Box Score Scout to see which players he compares closest to. Using GrindingTheMocks.com‘s projection, I entered 21st overall as Jefferson’s draft position.

Although his two closest comparables are nothing to write home about, the next three (Robert W00ds, Brandin Cooks, and Jeremy Maclin) all went on to have WR1 fantasy seasons and at some point were the top wideouts on their respective teams. Sandwiched between two duds is the one and only DeAndre Hopkins. Game tape of Jefferson reveals that he wins in very similar ways to Woods and Hopkins: with solid route running, excellent body control and the ability to use their physicality with the ball in the air.

In our mock draft, I had the Ravens taking Jefferson 28th overall. He could be ticketed for the Marques Colston “big slot” role in the NFL – a perfect fit for a team like the Ravens who have Marquise Brown on the outside.

Jefferson is a player who can win both inside and outside, and many in the fantasy community are bullish on him. All signs point to Jefferson being a very safe selection as a quality WR2 in the NFL, and maybe even a WR1 on the right team.

Is he as special as teammate Ja’Marr Chase? Probably not but he could certainly be the Jarvis Landry to Chase’s Odell Beckham Jr.