Despite the Rams trading Brandin Cooks, Robert Woods still isn’t receiving the love he deserves from early drafters. Being selected at WR20, Woods remains one of fantasy football’s most undervalued assets.

The Rams offense was a juggernaut in 2018, scoring the NFL’s second-most points en route to the Super Bowl. Unfortunately, the Rams struggled in 2019, falling to 11th in points scored.

In 2018, coach Sean McVay helped Woods finish as the WR10, while Cooks finished as WR13. Cooper Kupp only played eight games but averaged more PPR points per game than both Woods and Cooks.

Despite the Rams’ offensive struggles in 2019, Kupp finished as the overall WR4. After a slow start to the season, Woods heated up en route to the WR14 finish. Cooks missed two games due to concussions, but fell drastically to WR61.

The offensive scheme is talked about frequently after tight end Tyler Higbee became more involved down the stretch of 2019. Their offensive personnel groupings did change slightly towards the end of the year.

Their 11 personnel was critical to the success of three wide receivers. With Cooks traded, it doesn’t have as much of an impact as Josh Reynolds will likely be the odd man out. In fact, the Rams used a personnel grouping with fewer than two receivers for just 1.6 percent of their total offensive plays.

Now that we’ve established that Woods will be on the field, let’s project his output.

With Todd Gurley not looking like the same player, the Rams passed on 62 percent of their offensive plays – this was up from their 2018 ratio. Unlike their personnel packages, their passing tendency did not change after their Week 9 bye. 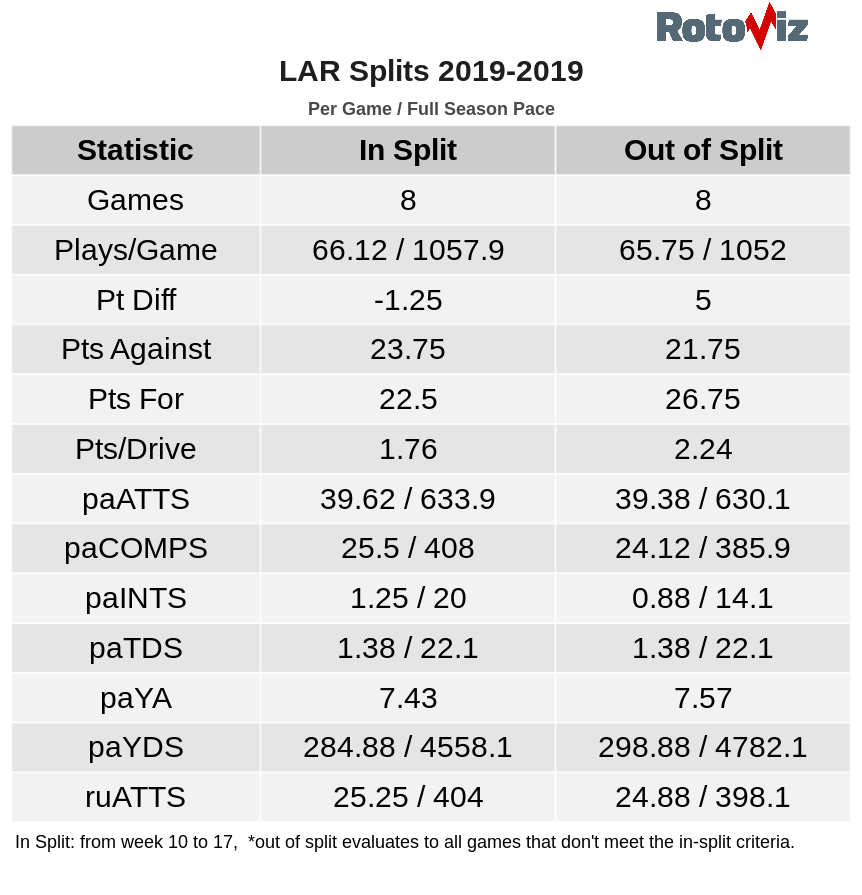 Despite missing a game, Woods was targeted 139 times last season. That is a 22 percent market share of the Rams’ 632 pass attempts.

As a member of the Rams, he’s caught 65.5 percent of his targets. That would give Woods just under 88 receptions.

Woods has averaged 8.9 yards per target as a member of the Rams, but that number fell to 8.2 last season. Let’s keep this projection conservative and project him for 8.2 yards per target.

Remember, this is a very conservative projection for a number of reasons. First and foremost, Cooks has left the team and we’re not giving Woods any additional targets.

Secondly, Woods has averaged 18 carries for 136 yards and a touchdown over the past two seasons. We’re not including any rushing production in his 2020 projection.

Regardless, this projection would slide Woods in at WR14. Woods is currently being drafted as WR20.

After Cooks’ departure, Woods is being selected below where he finished in his first two seasons with the Rams. Kupp and Woods are essentially 1A and 1B on a team that still has the potential to be one of the league’s better offenses. Last year Woods showed that has a very high floor, but this year he could show an even higher ceiling.