Somehow it seems like every year that Golden Tate is undervalued in PPR leagues. After finishing as WR12 in 2014, Tate finished as WR24 playing alongside Calvin Johnson in 2015. Last year, Tate struggled out of the gates but finished the season as WR17. That makes three straight top 24 finishes – yet Tate is currently being drafted as WR27. Let’s look at why, even after proven production, he is still undervalued.

While discussing Tate’s past production – let’s examine how Calvin Johnson’s involvement affected him. 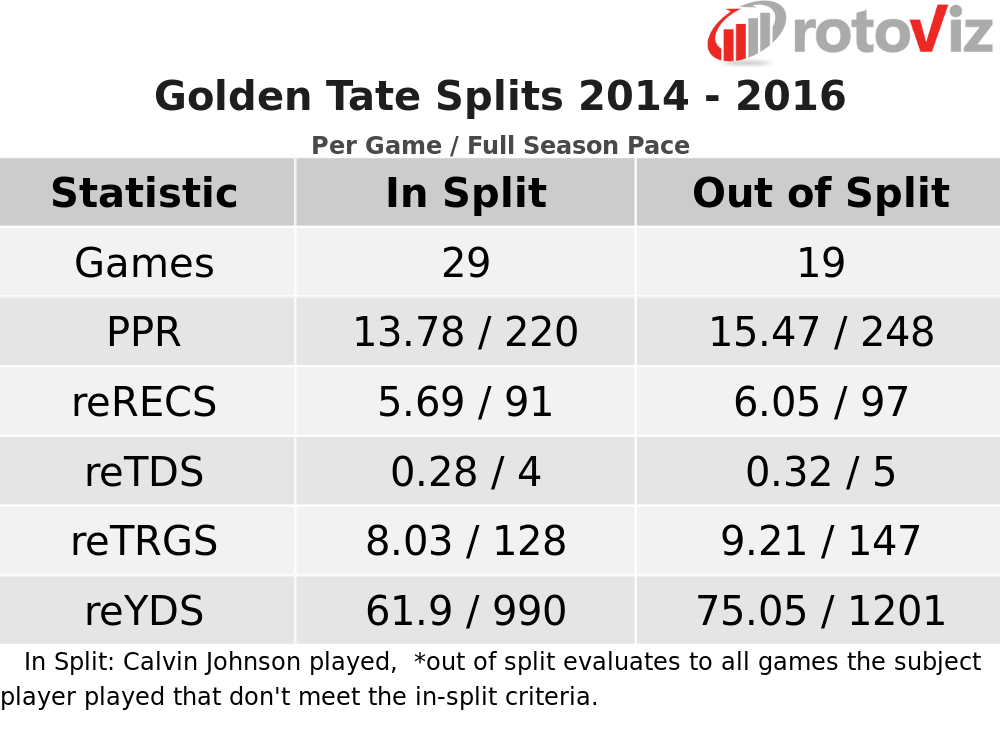 It’s clear that Tate scores more fantasy points when Calvin Johnson is not playing. Without Megatron, Tate has very little competition for targets. We know that targets are the lifeblood of fantasy scoring and last year Tate finished 14th in targets, yet he’s being drafted as WR27.

During the offseason, the Lions drafted Kenny Golladay in the third round. He’s an interesting prospect but will have plenty of opportunities replacing Anquan Boldin’s 95 targets. It’s very unlikely that he affects Tate’s targets in a negative fashion. The Lions didn’t add any other imposing offensive threats. Marvin Jones flamed out after a hot start, and the clock is ticking for Eric Ebron’s breakout that we always think is coming.

Over the final 12 weeks of 2016, Tate finished 7th in WR scoring (both aggregate and per game). On a per game basis, Tate finished behind just Odell Beckham Jr., Antonio Brown, Jordy Nelson, Mike Evans, Julio Jones, and Michael Thomas. All of those receivers are being drafted, on average, in the first 14 picks. Tate is being selected, on average, with the 55th pick.

With injuries so prevalent in today’s NFL, I would be remiss to exclude Tate’s impressive durability. In the past six seasons, Tate has missed one game. As a member of the Lions, Tate has played in 48-of-48 regular season games.

While Tate may not have the mouth-watering upside to finish as a top-five wide receiver, he currently sticks out as a fairly obvious value pick. It’s not always the sexiest picks that win you leagues, and when all is said and done Golden Tate has shown time and time again that he puts up numbers.