Sammy Watkins is not the name you may think of when you think of league-winning wide receiver. According to MyFantasyLeague ADP, Sammy Watkins, the 2015 WR20, is going in the early 3rd round as the 17th wide receiver off the board. But I’m here to tell you that’s insane because Sammy Watkins is historically efficient and special. Once you see the data, you will be more than inclined to agree with me.

It may not seem like it, but Sammy Watkins is in seriously rarified air when it comes to his career statistics. Courtesy of Pro Football Reference’s Season Finder tool, I looked at which players had 125 catches, 2000 yards, 15 touchdowns and averaged 16 yards per catch in their first two seasons in NFL history:

That’s right: historically, Watkins’ career has started in a similar way to the top-two receivers of all-time, the greatest receiver of the past 10 years, and arguably the best receiver in the game today. Not exactly horrible company to be in, considering how the rest of their careers went. Moreover, only Moss and Watkins accomplished this feat before they were 23 – and Watkins was 4 months younger.

To be fair, the touchdown number is a bit bloated by Jerry Rice’s 22 touchdowns in 12 games. But even if we knock the TD total to 10 instead of 14, that’d still be enough to be the WR7 in 2015. I will remind you that he’s currently being drafted as the WR17.

As our very own Mike Braude showed in his fantastic yards per target article (Watkins adorned the cover of that masterpiece), Watkins finished 4th in yards per target in 2015. More impressively, he was the only one in the top seven with more than 62 targets.

Although he was only the WR20 he saw the 37th most targets at the position, finishing as the only top 27 wideout with under 100 targets. He even finished 2nd in PPR fantasy points per target last year. If he simply kept up his 18.2 PPR points per game (top-10 for WRs) for the three games he missed, he would’ve finished as the WR9.

Let’s use Rotoviz’s Adjust Yards Per Target (AYA) app to hammer this point home and see how good Tyrod Taylor is when tossing the pigskin his way: 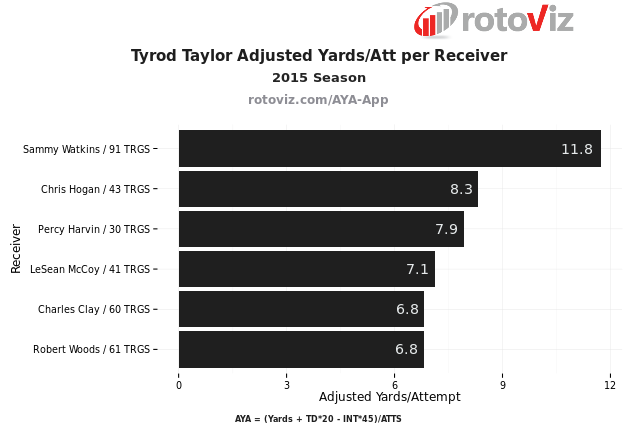 Not exactly tough to see who the most efficient and best receiving option on the Bills is. Watkins showed last year he can be an elite receiver with elite efficiency when seeing somewhat significant volume.

He Appears To Be Fully Healthy

The one valid reason for avoiding Sammy Watkins in the 2nd round is his injury history – more specifically, his surgically-repaired foot. As we know, broken foots can be a nightmare for wide receivers, especially when they try to rush back from them (see Bryant, Dez).

Watkins’ surgery occurred sometime in April, and his recovery period was apparently estimated to be 6-8 weeks. May 1 to Week One of the NFL season would give him 19 weeks of recovery, and we can rest assured that Buffalo will taking zero chances with their best player.

Of course, considering his injury history Watkins does come with some risk. But if you are averse to risk, then fantasy football is simply not the game for you. Even less at than 100% health throughout the start of his career, Watkins has proven to be historically great and incredibly efficient. I’m targeting him in the 2nd round of drafts and rushing to the computer to blindly click “Draft” every time he’s available in the 3rd.