Home / Fantasy Football Studies / Should Drafters Select Will Fuller in 2021?

Should Drafters Select Will Fuller in 2021?

While doing some wide receiver research, I tweeted about Will Fuller. Fuller, being drafted as the WR37, was 8th in wide receiver scoring when suspended after Week 12 last year. How should we forecast him for 2021?

Let’s also keep in mind he was also 8th in per-game scoring for the season.

At the time of this article’s publication, every wide receiver on this list is being selected at least 33 picks ahead of Fuller.

The tweet was met with some negative responses – as it’s clear that many fantasy owners are convinced that Fuller’s production was the result of Deshaun Watson and the performance-enhancing drugs. Perhaps they’re also concerned about his one-game suspension.

Obviously, Watson has been a huge boost for his receivers, but does signing with the Dolphins justify a drop of almost thirty wide receiver spots?

Will Fuller Is Legitimately Good

Perhaps recency bias comes into play, as drafters are forgetting that Fuller led the entire NFL in yards per target at 11.7. Usually, only good football players average over 70 yards per game and over 11 yards per target.

Over the last three years combined, only Justin Jefferson and AJ Brown have averaged more yards per target. That means Fuller is ahead of studs like Mike Evans, Chris Godwin, Tyreek Hill, Julio Jones, and more on a per-target basis. 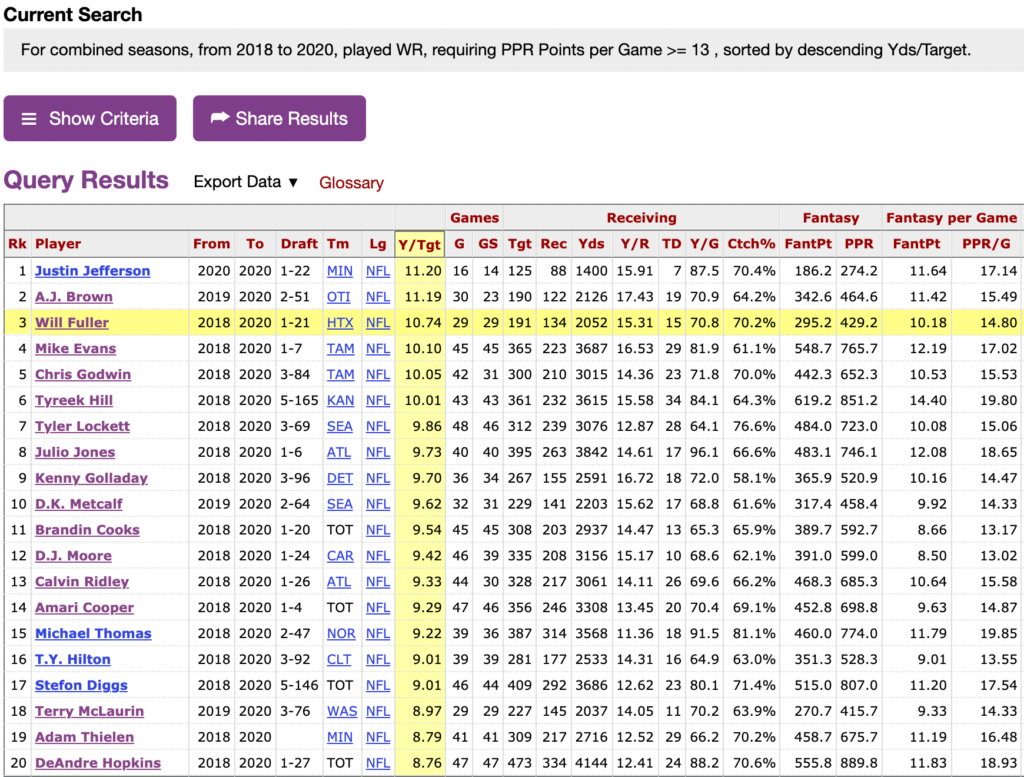 Fuller isn’t just a player that became good in the NFL. He was an outstanding prospect entering the NFL and was a first-round selection. He possesses unique 4.32 speed that makes him a mismatch creator at the NFL level.

RotoViz’s Range of Outcomes tool uses historical data to help users to understand a player’s realistic range of outcomes for the coming season. The tool reviews a player’s statistics from his two most recent seasons to match him with players from prior seasons that produced similar statistics. Obviously, the tool does not know that Fuller has changed teams.

The objective tool ranks Fuller as the 10th best wide receiver heading into 2021.

Once again Fuller is being grouped with wide receivers who are being drafted many rounds ahead of him.

Fuller’s per-game numbers over the past two years are comparable to players who are selected in front of him in every draft.

Objectively, regardless of whether you like him, Will Fuller has been a good NFL wide receiver. I’m not arguing that he should be drafted ahead of those players – I’m arguing he’s a value at his current draft position. However, his production will at least partially rely on quarterback play.

Tua Tagovailoa As a Prospect

There’s no way around it, Tagovailoa was disappointing as a rookie. However, quarterbacks are shown to take a leap forward in Year 2 and Tagovailoa was an excellent prospect. I’ll let Dalton Kates explain without the context of his rookie-year struggles.

Tua Tagovailoa is such a good QB prospect.

Health aside, he looks primed to become a star in the NFL. pic.twitter.com/L7UswLuEHU

An argument can be made he’s one of the best college QBs ever. pic.twitter.com/tUCs5ZA8ij

A counterargument would be the strength of the offensive line and wide receivers that Tua played with but either way, his collegiate production is extremely impressive.

Travis May of RotoViz recently created two advanced metrics to predict draft capital and fantasy success with impressive accuracy. The metric includes Adjusted Yards Per Attempt Over Expectation (AYAOE) and Peak Rushing Yard Market Share and when combined with draft position can predict PPR with an R-squared over 0.6. Of quarterbacks drafted in the last five years, Tua is a promising No. 6 on the list. With players like Joe Burrow, Kyler Murray, Lamar Jackson, Patrick Mahomes, and Justin Herbert around him, it’s an extremely promising list to be on.

The list serves as a reminder that coming into the NFL, Tagovailoa’s injury was the concern, not his talent. He was the consensus No. 1 selection prior to his serious hip injury. Still recovering from the injury, the Dolphins weren’t intending to play Tua early in the season.

The offense was built around Ryan Fitzpatrick. Regardless, when a rookie quarterback is thrown in the fire and his best two pass catchers are DeVante Parker and Mike Gesicki, how well do you expect him to play?

In Week 15, Tua led the Dolphins to a win against the Patriots. With Parker and Gesicki out, the Dolphins’ leading receivers were Lynn Bowden Jr. and Durham Smythe. If you are reading this article and know who Durham Smythe is, I commend you.

The pieces were simply not put in place for Tua to succeed as a rookie.

Can Tua Take a Step Forward in Year 2?

No one is better at predicting jumps than RotoViz. Evan Silva came on the Stealing Bananas podcast (which you must listen to) and explained why he expects the Dolphins offense to take a big step forward. Shawn Siegele illustrated why the Dolphins Could Lead to an Embarrassment of Fantasy Riches in 2021.

Blair Andrews has shown the sky-high breakout rate for first-round quarterbacks in Year 2. Tua was a 22-year-old rookie, which also improves his outlook.

This year the Dolphins have added weapons to tailor to Tua’s skillset. The additions of blazing speed in Fuller and Jaylen Waddle more closely align to the Alabama offense that Tua dominated with.

Quarterbacks are often as good as their pass catchers and the Dolphins have drastically improved Tua’s weapons. He looks ready for a Year 2 jump, which makes him an intriguing option as a late-round quarterback.

There are fair reasons for why Fuller is dropping in ADP: leaving Watson certainly hurts. Regardless, only one owner wins each fantasy league, and that owner must take risks. Fuller is a good player that isn’t being drafted as highly as he’s shown he’s capable of producing. Should the Dolphins offense take a step forward, when there are many reasons to believe they will, Fuller will be a massive value.