Rookie running backs frequently have an impact both in the NFL and fantasy leagues. Last year it was Ezekiel Elliott and Jordan Howard breaking out as rookies. Even if you don’t like drafting rookie running backs, it’s good for fantasy owners to know backups because running backs are frequently injured and this leads to increased opportunities for backups.

I will mention six rookie running backs who are likely to make an impact in 2017. I will use RotoViz’s Similar Prospects App to find comparable players and to give you an overview of each running back’s strengths and weaknesses.

Most fantasy owners already know about Leonard Fournette. The 4th overall pick in the 2017 draft, the enthusiasm for Fournette has already pushed his average draft position into the 2nd round of fantasy drafts. His similar prospects assume a bright future. 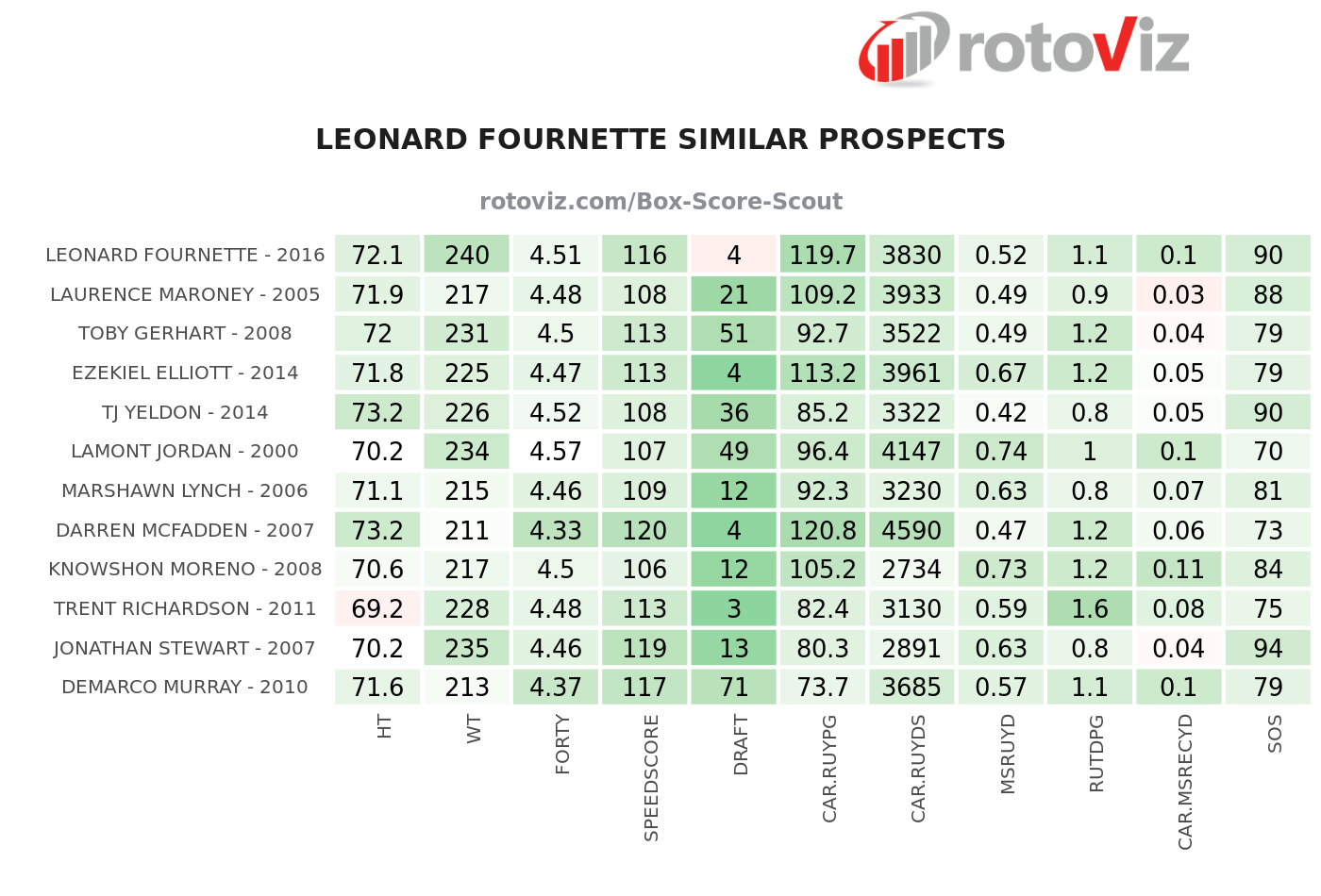 With former and current studs like Ezekiel Elliott, DeMarco Murray, and Marshawn Lynch as comparable players, Fournette is clearly a special prospect. He has imposing speed at 240 lbs. and rushed for an impressive 119.7 yards per game for his college career. While he’s likely to play frequently as a rookie, it’s possible that the hype is already out of control with his high ADP.

There may not be a better all-purpose offensive weapon in the 2017 NFL draft than Christian McCaffrey. Despite being a little undersized, he dominated against solid college competition. Selected 8th overall, the Panthers must have a plan to use McCaffrey. 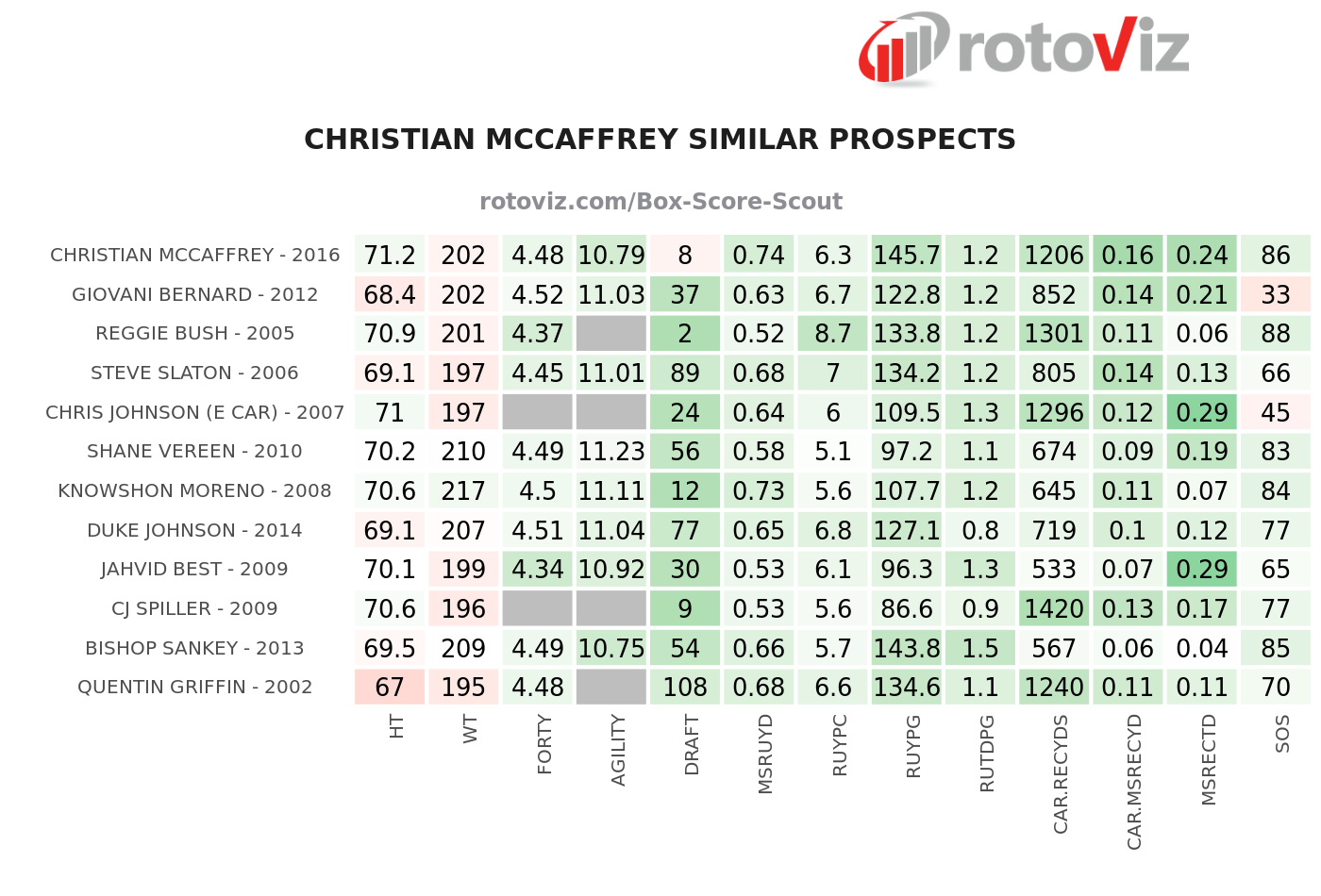 Running a 4.48 forty, in addition to a 97th percentile agility score, McCaffrey bolstered his impressive resume with an outstanding combine performance. In college, he dominated on the ground and through the air – catching an insane 24 percent of his team’s touchdowns. Prospects like Reggie Bush and Chris Johnson show the immense upside that McCaffrey offers, but the size of his comparables suggests that he may not be fit to be an every down back.

In terms of his rookie outlook, McCaffrey has one immediate concern: the Panthers threw to their RBs the least out of any team in 2017. Cam Newton said they plan to throw more short passes, but can you justify drafting McCaffrey at the end of the third round? You may have to if you want to draft him.

Dalvin Cook had the potential to be the first running back selected until his underwhelming combine. While Cook did run a promising forty, his agility and jumping ability were dreadful. This led to Cook sliding to 41, where he was selected by the Vikings.

From a production standpoint, Cook has the tools to be a star; he performed well on the ground and through the air against difficult competition. Cook’s similar prospects show reasons for optimism. The favorite to start ahead of Latavius Murray and Jerick McKinnon, Cook will receive the opportunity to make an immediate impact. Vikings coach Mike Zimmer stated after minicamp that second-round pick Dalvin Cook “has a chance to be special.”

Joe Mixon was not invited to the NFL combine because of past conduct and for that reason, his athletic ability is not included in the RotoViz Similar Prospects app. At the Oklahoma pro day, Mixon ran a 4.43 forty, which at 6’1” 228 lbs. led to Ezekiel Elliot comparisons.

Mixon’s similar players show his pass-catching prowess. Similar prospects like Maurice Jones-Drew, Deuce McAllister, Marshawn Lynch, and Rashard Mendenhall show plenty of upside. The only issue with Mixon’s production is volume. He split attempts with Samaje Perine but was hyper-efficient whenever he got the ball. Mixon averaged 6.8 yards per carry and an insane 14.5 yards per reception. Since they were on the same offense, let’s compare his production with Perine.

Stunningly, Mixon rushed for more yards per game despite seeing an average of four fewer carries. Mixon is also clearly the better receiver. With Gio Bernard recovering from a torn ACL and Jeremy Hill’s inconsistency, Mixon is expected to take over as the Bengals starter.

Per MMQB, Mixon’s high-end acceleration and size/speed ratio have stood out, as has his work to improve in pass protection. According to one Cincinnati staffer, he looks “like a beast.” While he could be the most talented runner in this class, you’ll have to pay an expensive 3rd round price tag to draft him.

The 5th running back selected in the 2017 NFL draft was Alvin Kamara. Under Sean Payton and Drew Brees, the Saints have a well-documented history of targeting the running back position frequently. While we know receiving isn’t Adrian Peterson’s specialty, Mark Ingram or Kamara will likely benefit from this historical trend.

Most of Kamara’s production was in the passing game. Without quality production on the ground in college, it’s unlikely he’ll see many opportunities there with Peterson and Ingram around. The Times-Picayune’s Larry Holder expects third-round RB Alvin Kamara to play a “Reggie Bush/Darren Sproles-type role”.

After topping 70 rushing yards in five of the first six games last season, Spencer Ware didn’t top 70 rushing yards once over the final nine games (including their playoff loss to the Steelers). In the 3rd round of the 2017 NFL Draft, the Chiefs drafted Kareem Hunt. With a 4.62 forty time, Hunt isn’t the fastest back but he accrued over 4,900 rushing yards in his college career while racking up over 10 percent of his team’s receiving yards as a senior.

While his production was solid, Hunt didn’t play against the strongest competition at Toledo. Still, there are positive comparables: Chester Taylor and Michael Turner succeeded despite playing against inferior competition. Hunt’s slow forty time doesn’t doom him either, as Cedric Benson had similar athleticism. Hunt “has already impressed with his short-area burst and balance”.