The Case For Demaryius Thomas As The WR1

Every year, a bevy of players are projected to be the number one player at each position, or even overall. Here, I’m going to make the case that Demaryius Thomas should be the first wide receiver off the board, and arguably the first player off the board.

Sharing a tier with Julio Jones, Dez Bryant, Antonio Brown and Odell Beckham, it is most likely you can’t go wrong with any of these players. But we aren’t looking for a good value. We are looking for the best value. Here is the case for Demaryius Thomas as exactly that.

First, let’s put Demaryius’ first three magical seasons with Peyton Manning in perspective. With much less fanfare than I’d expected, he’s on a list with only Jerry Rice and Marvin Harrison  in NFL history. For three straight seasons, Thomas has 1,400 receiving yards and at least 10 touchdowns.

That’s right, the man affectionately known as “Bay Bay” is on a list of two of the greatest statistical receivers of all time: Jerry Rice and Marvin Harrison. In fact, Peyton Manning has quarterbacked 2/3s of the “3+ Seasons of 1,400-10” club. And as we all know, he’s coming back to give Demaryius Thomas a shot at joining old friend Harrison as the only man to do it for four straight seasons. Long story short: Demaryius Thomas is not only consistently good, he’s consistently great.

Using the help of Rotoviz, let’s take a look at Thomas’ past. By using the NFL Career Graphs we can see how he compares with the other top wide receivers. 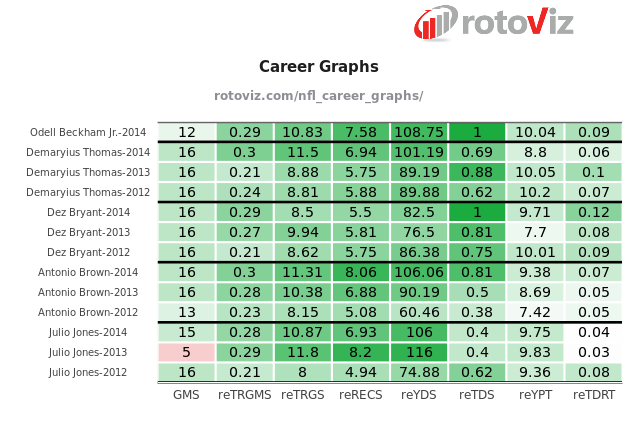 Firstly, Thomas hasn’t missed a game in three seasons – unlike potential injury risk Julio Jones. Thomas led this group in targets per game last year, his first year with Peyton Manning below 10 yards per target. No other receiver on this list has topped 10 yards per target in two out of their last three season. Thomas is the second most consistent touchdown producer behind only Dez Bryant, but saw three more targets per game than Dez last season. Those targets turn into points in PPR leagues.

Thomas is entering his age 27, something Mike Braude has proved time and time again is a peak season for wide receivers. Elite floor and elite ceiling, ladies and gentlemen.

There have been plenty of very valid arguments pointing out how Julio Jones has an amazing shot to finish as the WR1 of 2015. One of the key arguments to this is how Kyle Shanahan is now in charge of the offense of the Falcons, and he loves to funnel the ball to his top wideout.

Many forget that Shanahan and Kubiak both come from the Mike Shanahan coaching tree, and that the younger Kyle was the coordinator under now-Broncos coach Kubiak in Houston. Here’s how Kubiak targeted his number one wideout from 2006-2014:

Thomas has proven to be at least as good as Andre Johnson was at his peak, and Kubiak showed he is willing to relentlessly target his number one wide receiver. I’m not reinventing the wheel here: I’m simply pointing out that if you are going to make the argument that Shanahan boosts Julio Jones, it is probably safe to apply that same logic with Kubiak’s effect on Thomas.

If you don’t like that argument, take solace in the fact that Demaryius Thomas led the NFL with 184 targets last season.

Many detractors will say that Thomas may not get the volume that he once did with Peyton Manning growing older and with CJ Anderson on the rise at running back. I’m skeptical of this but even if that turns out to be true, he’s been a top-tier WR without elite targets before:

Let’s keep in mind that if Demaryius only gets 142 targets (a drop of almost three per game from 2014), he can still finish as the WR1. Demaryius has proven that with lower volume, comes higher efficiency. 142 targets averages out to about 8.9 per game, and Kubiak’s top wideout has eclipsed that in seven of the past nine seasons. Throw in the fact that red-zone maven Julius Thomas is gone with no clear replacement, which means Demaryius’ red zone looks have potential to increase.

He may not have the hype of a Brown, Beckham or Jones, but Thomas has been pumping out truly elite seasons for three straight years. It’s not sexy because there is no “unknown”, but his consistency has shown us he is going to be elite as long as he is on the field. Plain and simple.