The Making Of A Dynasty Champion: Part 5

In Part 5, we will finally make it to the double-digit rounds. These rounds aren’t as sexy as the top three rounds, but still vitally important to creating a dynasty monster. Be sure to check out Part 1, Part 2, Part 3 and Part 4 to contextualize the following explanation and analysis!

I was hoping to have T.J. Hockenson fall to me here, but he was selected seven slots earlier. With a solid drop off after Henderson, I tried moving this selection for a pick in the highly regarded 2020 class. I had to add a little extra on my end but by this time next year, I will be ecstatic to have that first round pick.

This puts me at a total of three 2020 1st round picks for next year and really helps me to continue to bring in more talent to the roster.

Why not? Adding my 5th rookie in this draft, I had to do it in style. I honestly felt like this was a very good value for Murray and was shocked to grab him here.

It’s funny that his redraft ADP is higher than where I was able to snag him as I’m essentially buying Murray for his rookie year cost without his age and youth factored in.

Add in the fact that Kyler Murray is elite in the rushing game (he ran for over 1,000 yards on 7.2 YPC last year) and we have the best dual-threat quarterback prospect since Michael Vick (who never eclipsed 700 yards rushing or topped 6.0 YPC in college).

Having a QB who can run the ball is a cheat code in fantasy as we saw Lamar Jackson finish as QB16 or higher in every game he started last year despite never topping 205 passing yards in a game and throwing for just five total passing touchdowns.

If Murray can translate his game and ascend into an elite passer, we may see a perennial top-five fantasy quarterback for many years.

Based off of draft capital alone it would seem perplexing that the better athlete and more efficient runner in college was drafted in the 3rd round of the NFL Draft while his counterpart Josh Jacobs got drafted in round one. This isn’t necessarily a knock on Jacobs, but to highlight that Harris may be sliding under the radar. He’s shown the ability to catch passes evidenced by his 22 receptions in his final year of college and his size gives him workhorse ability.

Ending up with the Patriots wasn’t the most ideal landing spot, as they spent a 1st round pick on Sony Michel last year and have James White dominating passing work. With Michel’s injury history and Belichick’s history of using a running-back-by-committee, there is a lot of potential upside here for Harris. While Michel has been missing time during OTAs, Harris has gained valuable snaps with the first-team offense and has had an impressive minicamp.

This could be a fluke, but a more likely explanation is that Belichick doesn’t care who his starting running back is and that he is going to be extremely matchup dependent. History has shown us being the top RB in this offense has immense, potentially league-winning upside. Harris has the opportunity to surprise people this year if he can take over the starting role in this offense.

Nyheim Hines may be one of the most undervalued this offseason. Hines entered an impressive list of players with his work last year in the receiving game. Since 2000, Hines is one of seven rookie RBs to catch 60 or more receptions (Pro Football Reference).

Each of these running backs has at least one RB1 one season to their name, and receptions have a very strong correlation with fantasy points in PPR leagues. 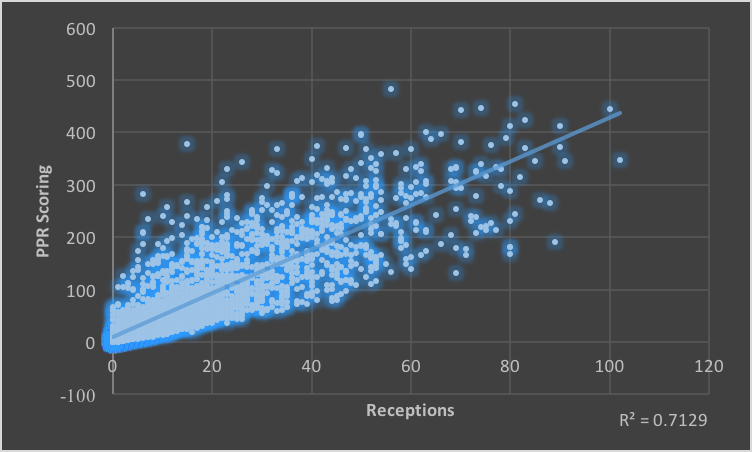 Betting on RBs who are utilized in the receiving game is an easy way to consistently beat ADP. Nyheim Hines finished as RB28 as a rookie and I was able to scoop him up as RB46 in this draft.

While it’s very unlikely Hines becomes a workhorse RB in this league, there is hope he can be a guy who flirts with RB2 value for the next few seasons and at worst, is a guy who can provide a decent floor during bye weeks.

Bernard is officially the oldest player I’ve drafted. I’m a fan of his as he’s been one of the more underrated running backs since entering the league. Bernard is a high-end backup and if anything were to happen to Mixon he would slot in as the lead back. In the two games Mixon missed last year, Bernard finished with 19.6 and 25.6 fantasy points and proved he’s worth starting in all fantasy leagues when Mixon is out.

There is a chance that Bernard has value in Zac Taylor’s new scheme. The Athletic’s Paul Dehner predicts Bernard will see 11-13 touches per game in 2019. Bernard is in the last year of his deal and will become a free agent after this season so there is some upside in the landing spot as well.

Bernard will be 28 this season so his time is running out, but this late he can be a valuable piece if things break his way.

It’s slim pickings at this point and essentially bought a 2nd round pick in what is almost surely going to be more valuable than the pick I traded away. Not really too much to see here, but considering my makeup this made sense to accrue value.