The Making of a Dynasty Champion: Part 2

In Part 1 of the Making of a Dynasty, I explained how dynasty owners can gain advantages prior to the startup draft. This article will explain why I selected the players I drafted and show you the in-draft trades that I made.

I had George Kittle ranked in the “studs” tier and was pleasantly surprised to see him still on the board when it was my turn to pick. For the team I was trying to build, this was an easy selection.

I took Kittle over Zach Ertz, as he is three years younger, and broke the NFL’s receiving yard mark by a tight end in a season in just his second year in the league. Getting an elite TE in dynasty is even more important than in redraft leagues where it’s easier to stream the position. In dynasty, you’re essentially stuck with what you have as the free agent pool is not very helpful.

Drafting tight ends in rookie drafts requires patience, as very few TEs break out before their age 25 season. Kittle has already broken out and should be a dominant weapon for the next five years.

If we are defining an “Elite TE” as a tight end who scored more than 240 points in a season (at least 15 points per game) and comparing it with a replaceable TE (the TE12 in 12 team leagues), the Elite TE’s score roughly 95 points more in a given season. Kittle provides my team with a strong weekly advantage.

D.J. Moore is a stud. I had him ranked as a second-round prospect, but due to ADP, it’s clear you can get him in the 3rd round. He checked every box coming out of college and had the first-round draft capital to boot.

Even if it’s a small sample size, D.J. Moore is by far the most efficient wide receiver that Cam Newton has thrown to in his career. 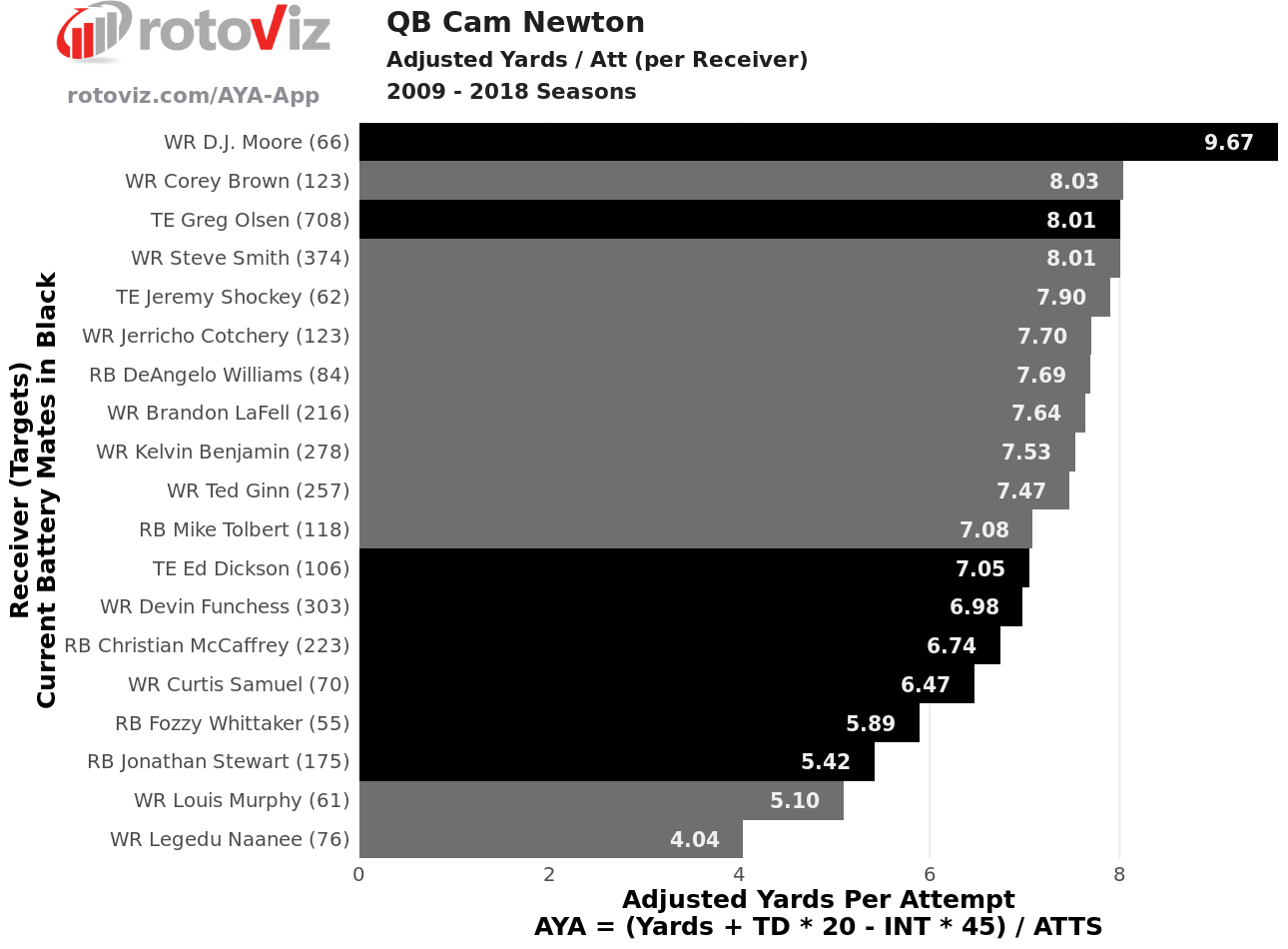 He clearly continued to dominate as a rookie and using the RotoViz Screener we can compare him to other rookies who had similar results. The results are very encouraging as six of the nine closest comparable players have had successful NFL careers and been extremely productive fantasy assets.

Remember that second-year receivers see the biggest jump in points so it would seem Moore is still undervalued even at his third round ADP. At just 22 years old, Moore will likely take a major jump and rise into a fantasy stud for years to come.

No rookies had been selected at this point in the draft and referencing the article earlier we see that on average the 1.01 is selected at Pick 17 in May drafts. I essentially got the 1.01 in this draft at a cheaper price than the average 1.04 pick in startup drafts.

Some believe Josh Jacobs is worthy of the 1.01, but I would disagree. Harry has an elite WR profile, was drafted in the first round, and enters a team where he is primed to produce right away.

Harry is already seeing work with the starters so the opportunities will be there with the reigning Super Bowl champs. This was the highest Bill Belichick has drafted a receiver since joining the Patriots and believed they were “so fortunate that he was still there.”

Clearly, the Pats think highly of him but that’s just part of what makes Harry so tantalizing as a prospect. Using RotoViz’s Box Score Scout we can see just how mouthwatering his comps are.

Outside of busts Laquon Treadwell and Cody Latimer, the list is littered with some of the better wide receivers in the game. 21 of the top 25 WR in ADP currently were cheapest during their rookie years – meaning now is the time to buy Harry – as his value with only go up with the expected Year 2 jump in production.

Harry also shows up in the upper echelon for future fantasy success in Miguel Chapeton’s PSI model. Harry checks all the boxes we want to see in a receiver, and I don’t have a doubt he will be a great player if he can stay healthy.

After getting sniped out of Chris Godwin a pick before mine, I decided to trade out.

Moving back one round was risky as I was passing on the chance of back to back picks here and taking Calvin Ridley and Tyler Boyd, but I liked a few players enough that I hoped would slip to me in the fifth round.

Buying a cheap 2021 1st will definitely help me win this trade in the long run, but it’s more of a patient play and with the trajectory of my team I felt getting those two picks would really help me in the future.

Some would call this a reach, but Tyler Boyd is massively undervalued. Boyd is still just 24 years old, over a full year younger than third-year receivers Kenny Golladay and Cooper Kupp despite being drafted later in dynasty drafts than both.

Coming out of college, Boyd was a great receiver prospect with a dominator rating and breakout age of 86th percentile and 92nd percentile, respectively. The third-year breakout from Boyd is absolutely legit, but the market still has concerns about last year being a fluke. All indications point toward last year being the beginning of a great run for Boyd and now is the time to buy him before the market corrects itself next season.

I never would have pictured myself being on the Calvin Ridley hype train, but here we are. I was pleasantly surprised to still see him available here as I would’ve picked him six slots earlier if I didn’t trade back.

Despite being an old rookie and not being anything more than average in his profile, he had a few things to be excited about: he was an early declare and was a first-round pick.

Ridley broke out as a rookie and we can see just how well rookie breakouts do in their careers. If we do a similarity search on Calvin Ridley’s rookie season the players that come up are elite.

Ridley was beyond efficient last year when targeted, as he had 55.6 fantasy points over expectation on his 92 targets. His 10 touchdowns are unsustainable on just 92 targets, but the next JuJu Smith-Schuster showed special qualities as a rookie.

Surprisingly, Ridley played fewer snaps than Mohamed Sanu last season so it’s logical to expect an increase in playing time and targets. We know second-year players have an increase in production so it’s fair to expect Ridley to enter next offseason more valuable than he is this one.

My next article explains my selections at the beginning of Round 5 with detailed reasoning for each player.