Parker here, back again with some more players who have proven themselves reliable enough to be labeled as must starts for the rest of the 2020 season. Again, a must start is a player we add to our lineup without hesitation or worry due to regular consistent production. These are also going to be players that have not necessarily ever been considered a must-start previously in their careers or are young surprising rookies with no track record at all in the NFL.

This man is the new WR1 in Pittsburgh and should be started every week from here on out. Mapletron (outstanding nickname) currently leads his team in receiving yards (335) and receiving touchdowns (4), despite starting off the year as the WR4 on the depth chart. For context, look at Mike’s tweet:

Hard to fathom how good Chase Claypool has been:

– Has scored as many TDs as Washington, JuJu & Diontae combined

Physically, he is also the largest and fastest WR on his team. With a 40 yard dash time of 4.42 seconds, a speed score of 129.8 (99th percentile), and a 6’4” and 238 lbs frame, there is no other Steelers WR that even comes close to his combination of physical prowess.

Mapletron also leads the league in fantasy points per route run (0.92) and fantasy points per target (3.69). Big Ben is also more efficient as well when targeting Claypool, posting a nearly-perfect 152.8 QB rating. His adjusted yards per attempt (AYA) dominates the rest of the team: 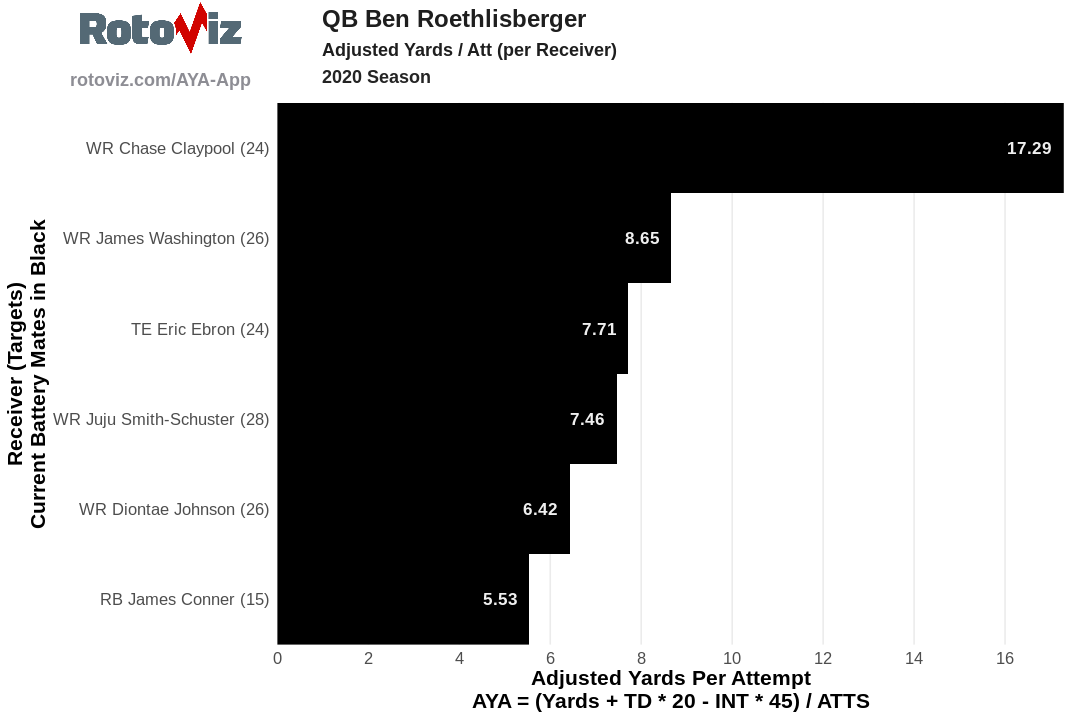 Not only has he outperformed all other Pittsburgh WRs in the passing game, but he has also been a contributor in the run game as well. So far this season Claypool has rushed the ball a total of 6 times for 21 yards and 2 touchdowns. The majority of these carries are in either goal to go or important short-yardage situations, further increasing his touchdown upside.

Claypool accomplished all of this by the end of Week 6 despite low involvement at the start of the season. In Weeks 1 and 2, he recorded a snap share no greater than 38% and a target share no greater than 8%. But once Pittsburgh saw some big splash plays from him in those games, they properly responded by expanding his role. In his last three games, he has seen his snap share rate increase all the way up to almost 80%. Claypool’s target share has also been considerably greater in that time frame, recording an average of about 21% – three times as much of his original involvement.

All of this has added up to Claypool being the WR15 on the season so far in PPR leagues, and all signs point to the continued success of Mapletron. Do not let the rookie stigma make you hesitant about putting him into your starting lineup. He is a “set and forget” player, no questions asked.

Through the first six weeks of the season, the undrafted Robinson has proven himself to be a player capable of handling a true lead back workload in the NFL. With an average of 14.2 carries (80.4% of his team’s attempts) and 4.3 targets per game, he is truly getting a full workload as a prototypical lead RB. The result? 17 fantasy points per game, or the overall RB10 on the year in that category.

As a rusher, he has posted a decent floor of 60.3 yards per game and 3 touchdowns on the season while proving himself elusive with 29 evaded tackles (9th among RBs) on the season – all on a team that rushes the least in the entire league.

Through the air, he is 3rd among all RBs in receiving yardage (207 yards), 5th in receptions (23), 6th in yards per reception (9.0), and 4th in yards per route run (2.03). And with only two drops on the entire season, he’s proven reliable hands even in limited volume.

No matter the game script, James Robinson will be on the field. And if he’s on the field this much with this many opportunities and is producing at this high of a level, you have to start him.

At the beginning of the year, this man was an afterthought at the end of drafts that most people took with one of their last picks. The hope was that he might be a playable flex replacement during bye weeks of regular starters. He’s turned out to be the WR1 of the Panthers passing attack.

Through the first six weeks of the season, Robby Anderson actually leads all Panthers receivers in targets (53), receiving yards (567), and receptions (40). With an average target distance of 10 yards and 219 total yards after the catch on the season, Anderson – not DJ Moore seems to be the one being used as the underneath route runner.

Not only is he receiving all of this golden opportunity, but he is also producing at a high level (17.2 PPR points per game) in fantasy despite only scoring just one touchdown so far this season. Week to week he has shown the ability to provide a high floor, recording 5 receptions for 55 yards (10.5 PPR points) in Week 3 and 4 receptions for 77 yards (11.7 PPR points) in Week 6 –  his worst two weeks in terms of scoring. In all four of his other games this season, he has scored at least 17.9 PPR points.

It doesn’t hurt that Teddy Bridgewater has made improvements this season as a passer. Prior to this year, the highest completion percentage he had ever posted was 67.9% last year with the Saints – this year he is at 70.9%. This is especially impressive considering he is also averaging the most yards per attempt (8.1) that he ever has as well, a full 0.8 yards more than any of his previous seasons. His 279.5 passing yards per game pace blows away any single-season performance previous in his career. This helps show that there is a symbiotic relationship between Anderson and Bridgewater – they are helping each other improve

Speaking of the supporting cast, experts thought it would be DJ Moore monopolizing the WR targets, but he has actually struggled to create a rapport with Teddy Bridgewater so far this season. With nine deep targets (targets which travel 20 yards or deeper) and an average target distance of 12.3 yards, DJ is not being used as the high-volume run after the catch/crossing route receiver in which he was utilized last year. Moore has recorded six drops this season (the most in the league) with a shocking 12.5% drop rate in just six games. That is twice as many as he recorded (3) through all 15 games he suited up for last season. Until his usage in this offense changes for the better, he may continue to struggle for consistency while Anderson continues to lead this receiving core.

To put it into perspective with the rest of the WRs in the NFL, Robby is 6th in total PPR points, 2nd in receiving yards, 4th in receptions, and 4th in yards after the catch. All of these marks are better than those posted by WRs like Calvin Ridley, Keenan Allen, or Adam Thielen. I’m not saying you should be starting Anderson over these guys. But all things considered, you should be able to start him with the same confidence as these top-end receivers. Per usual, things get much better when you leave Adam Gase.

The NFL is a forever changing landscape filled with some of the best athletes in the world and it can be extremely difficult to differentiate the weekly fantasy starters from all the rest. I hope I have provided you more clarity and confidence to start these emerging players week in and week out.

If you have any questions about these gentlemen or any other players in the league, feel free to reach out to me on Twitter @ParkerJamesFF. Thank you for reading and good luck this week in all your matchups!