This Week’s RB News and Developments

In the ever-changing landscape of fantasy football, it is always important to keep track of every update and development in order to gain an advantage over your league-mates. Preseason news is not something to accept as absolute certainty, but it can help sharpen the focus of your draft board. Let’s take a look at this week’s developments:

The Continued Resurgence of Christine Michael

After being drafted in the second round of the 2013 draft, Michael had never lived up to expectations after bouncing around the league. After finding his way back to Seattle, it was a wonder if he would even make a roster spot. In what has been dubbed “The Awakening” by respected football writer Chris Wesseling, Michael has looked like a man among boys as well as improving his off-field maturity. Take a look at his runs against the Vikings:

Michael has gone from an afterthought to a must-draft in fantasy leagues. He looks to have a definite role on game-days, and may even function as the passing-down back while Prosise recovers. Michael’s resurgence has made Thomas Rawls that much shakier of an early-round draft pick, and made Michael a lovely lottery-ticket in case of a Rawls injury.

Although Devonta Freeman was usually drafted after Tevin Coleman in fantasy last year, Freeman proved that was a big mistake after Coleman sustained an injury early in the season. Freeman finished as the PPR RB1 by over 54 points (!), scoring at least 32 PPR fantasy points from Weeks 3 through 6 last season. Somehow, 24 year-old Freeman is going six selections after 31 year-old Adrian Peterson in PPR leagues, despite the fact that Peterson has scored more than 320 PPR fantasy points (Freeman’s 2015 total) just twice in his nine-year career. Take a look at Freeman yesterday vs the Browns:

Le’Veon Bell’s suspension came as a rude surprise to early fantasy drafters, for he was the consensus number one RB before it was announced. Bell’s ADP fell from top-five to sometimes even outside the second round: 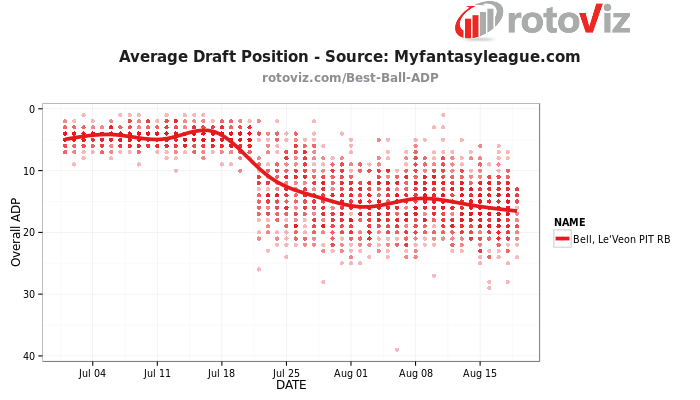 Bell already looked like a bargain in the second round – the beginning of the season doesn’t matter nearly as much as the end, and without the bye-week crunches you could draft around his suspension. But after the news of his reduced suspension broke today (from four games to three), Bell looks like even more of a steal if his ADP remains similar. Not only do you get Bell for another game, his suspension will be up by the time bye weeks begin in Week Four. Scoop him up in the late first/early second if you can.