Wide receivers are king in most PPR leagues and targeting the correct mid-round wide receivers gives you a massive advantage over the competition, especially when it comes to the ever-important strategy of winning the flex position in head-to-head matchups. Last year, choosing the correct mid-round WRs allowed you to trot out guys like Stefon Diggs, Keenan Allen, Will Fuller, Brandin Cooks, or Diontae Johnson as your WR4.

This year the correct picks again will provide you with a league-winning flex. Here are some excellent WR candidates to outperform ADP in the middle rounds.

Just like the rest of the Bengals’ offense, Tyler Boyd’s production came to a screeching halt when Joe Burrow went down with an ACL injury. Recency bias from their disastrous final six games may cloud our memory of just how good Boyd was at the beginning of the year. 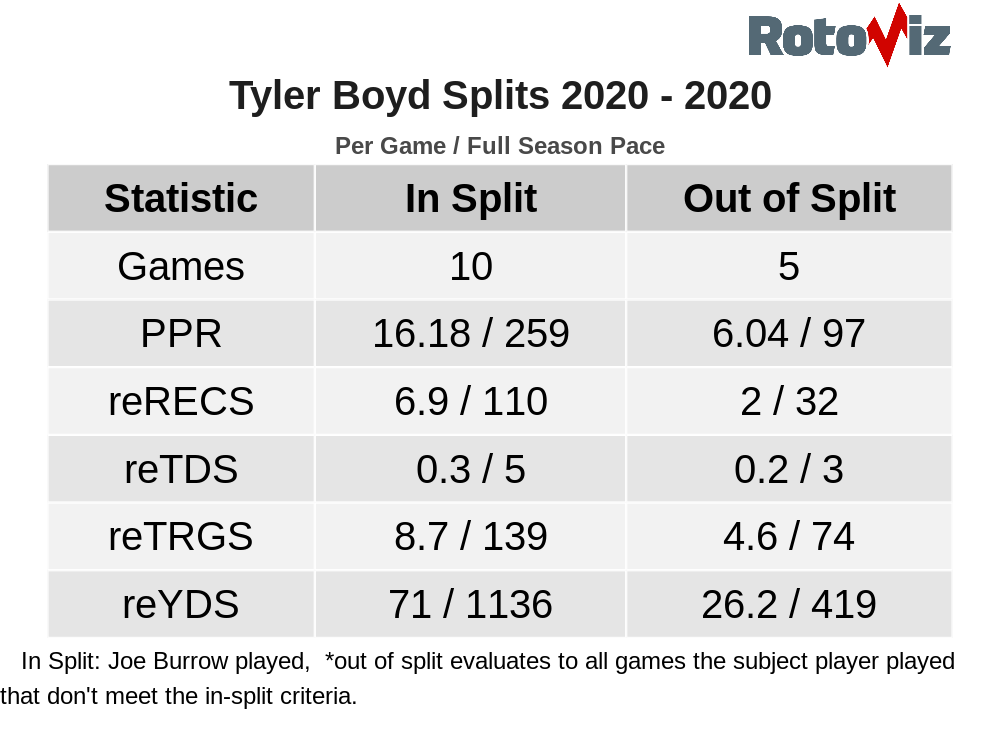 Boyd was on pace for last year’s WR10 finish (this year’s WR10 by ADP is going in the middle of the 3rd round) and to finish among the league leaders in receptions. Many people are scared off by his two stud teammates going ahead of him in ADP, despite Boyd being on pace last year to out-target and outscore Tee Higgins (who we also love). Here’s why the presence of Higgins and Ja’Marr Chase shouldn’t scare you:

Burrow was on pace for a league-leading 658 attempts.

The Bengals are going to be passing the ball a lot regardless of game script, and we still have to account for A.J. Green’s vacated 104 targets. Per the tweet above, if Burrow stayed healthy, Green would’ve finished with even more than 104 targets. Overall, Green finished with an 18 percent target share in 2020.

Remember, Boyd has always performed better next to star teammates (look at his splits with and without A.J. Green until last year), and he will turn 27 in the middle of the year, a great time to have a peak season.

With precious little at TE, Boyd is going to be heavily featured in the short-to-middle areas while Higgins and Chase dominate downfield and along the sidelines. Like with Green last year, fantasy owners should expect all three to finish with at least 100 targets (if healthy).

Burrow is reportedly going to be 100 percent by the time training camp opens, so his health shouldn’t be a concern. The Bengals know their identity revolves around Joe Burrow, which makes Boyd a great WR2 being drafted at a low-end WR3 price.

After a stellar rookie year that put him squarely on track to be a coveted sophomore breakout candidate, Deebo Samuel’s foot and subsequent hamstring injuries limited him to six healthy appearances.

In his stead, Brandon Aiyuk became Kyle Shanahan’s shiny new toy en route to a WR2 finish in terms of PPR points per game. Aiyuk is now being drafted two full rounds ahead of Samuel, which creates a nice buying opportunity.

Though both missed time, they played together in Weeks 4-7 and Week 13. During that period of time, Deebo out-targeted Aiyuk 31-30 while also earning a 7-1 advantage in rush attempts. Samuel and Aiyuk are likely to both see significant targets without either becoming the bonafide alpha, which makes Deebo’s discounted price the preferred option.

Though neither is going to significantly (if at all) out-target George Kittle, Deebo has proven an elite player with the ball in his hands. With raw but gifted Trey Lance about to electrify Kyle Shanahan’s offense, there will be plenty of quick screens and short passes for Samuel to feast on.

Last year’s injury-riddled 49ers somehow produced an atmosphere in which Samuel was on an 88/1,016/3 pace, and he’s still only being drafted as a WR4.

An investment in any 2020 Jaguar not named James Robinson proved foolhardy, but last year’s struggles sometimes create this year’s discounts. That is certainly the case with promising sophomore Laviska Shenault. Before we get into 2020 and beyond, let’s remember that he was an excellent prospect coming out of college.

Laviska Shenault can do it all.

Late firsts in rookie drafts this year are gold. pic.twitter.com/KNw6HrcXZE

Shenault achieved second-round NFL draft capital but was relatively disappointing, likely due to the dumpster fire that was the 2020 Jaguars. Putting things in perspective, however, shows that Shenault was among their most efficient weapons regardless of who was at QB, whether it be Gardner Minshew or Mike Glennon. 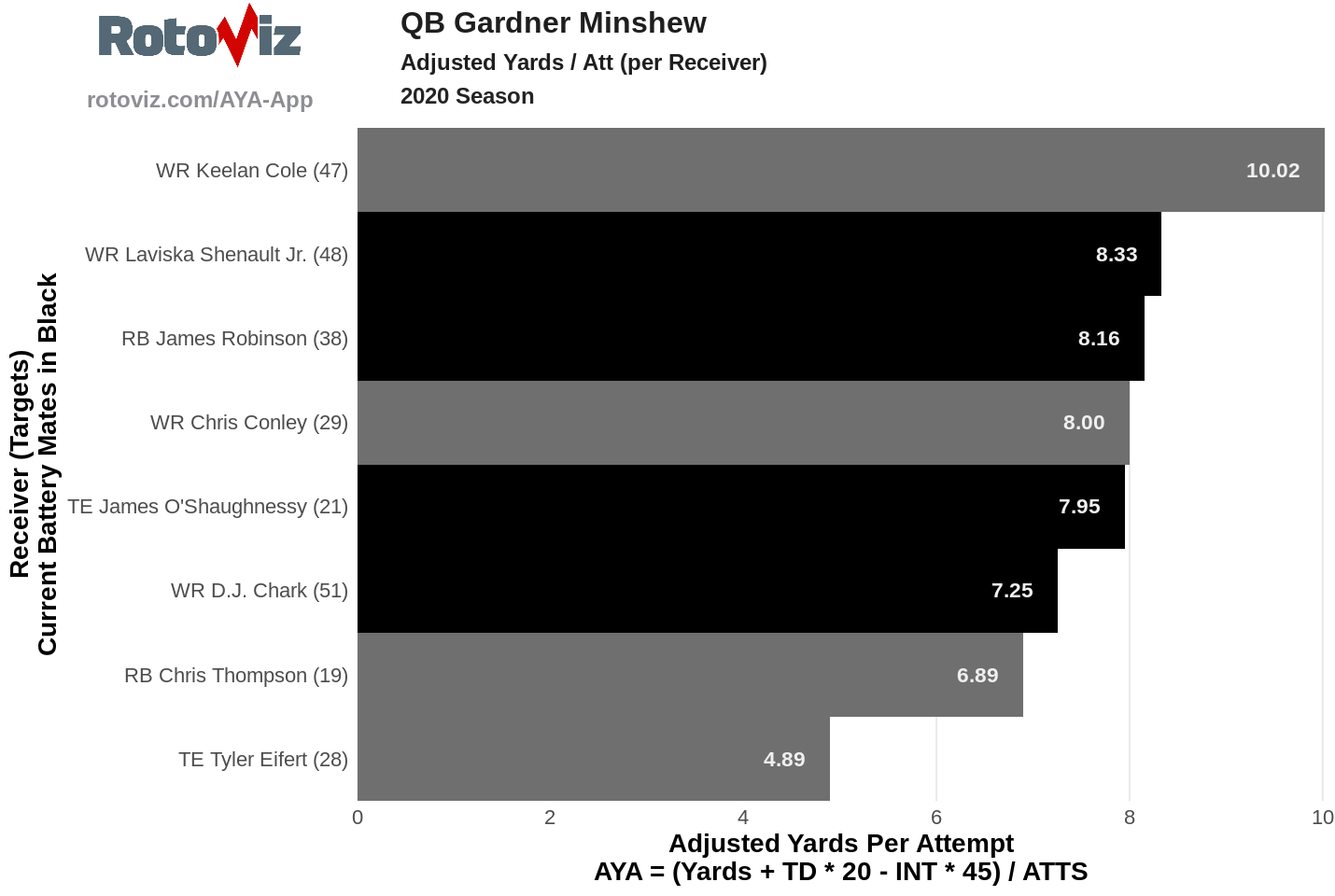 Heading into 2021, things are looking much brighter in Jacksonville. With new coach Urban Meyer, franchise cornerstones Trevor Lawrence and Travis Etienne, and last year’s PPR WR18 Marvin Jones to go along with James Robinson and D.J. Chark, this offense should be at least league average.

Even average quarterback production would be a massive improvement and mean impactful fantasy seasons out of the passing offense. Shenault – a classic sophomore breakout candidate – is so far proving to be an entire two rounds cheaper than last year’s mega-disappointment Chark.

Shenault is as likely as any Jaguar’s pass-catcher to lead the team in touches, and already has his coaching staff’s eye.

"I asked somebody in the #Jaguars building: Who is the player that the coaches are buzzing about? The answer was Laviska Shenault" – @HaysCarlyon pic.twitter.com/mPcD2KpC9W

He’s slated for something of a hybrid, short-area role in the Jaguars’ passing game which will feature free agent acquisition Marvin Jones and the aforementioned Chark down the field. He can handle the volume that comes with such a weapon after leading the team in receptions last season (while notching 18 carries) and is a steal anytime after the start of the 8th round.

my first year with Apex was last year and had a great time so here i am again. thanks