Since running backs are fantasy’s most volatile position due to injury and turnover, finding great value in the later rounds or hitting on a handcuff is much more likely for running backs than arguably any other position.

This is especially important if you are employed a strategy such as Zero RB which relies on hitting on your late round running backs and playing the waiver wire. With the help of RotoViz apps, let’s take a look at some of the best late-round RBs who are being ignored too much.

Short of a major injury, 2014 couldn’t have been worse for Zac Stacy and his owners. Projected to be a major workhorse on a ball-control offense, owners spent a 3rd round pick on a player who fell behind Benny Cunningham and Tre Mason on the depth chart and was even a healthy scratch on multiple occasions.

The result? 293 rushing yards and one lone touchdown. He was shipped to New York after the Rams drafted Todd Gurley and is now in a battle with Stevan Ridley to back up presumed starter Chris Ivory. Considering Ivory’s injury history, it’s relatively likely that he misses time after playing a possible 31 out of 32 games in 2013-14 after playing only 12 out of 32 in 2011-12.

Let’s see who looks better from a prospect standpoint between Stacy and Ridley: 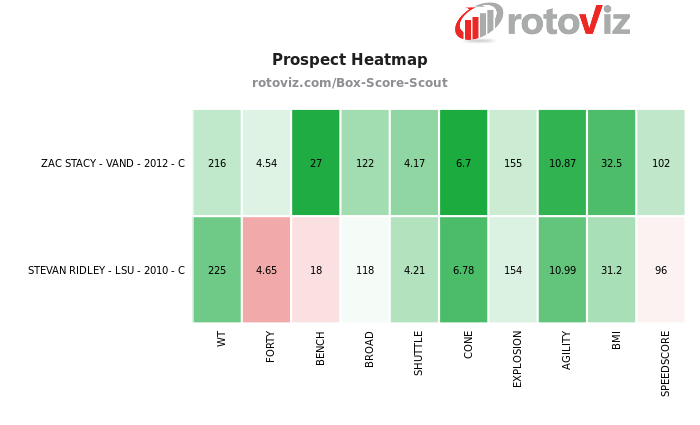 Stacy betters Ridley in every single category besides for weight. Let’s not forget that Ridley is coming off of a major knee injury and Stacy’s superiority in the passing game so far in the NFL. Stacy had more receptions his rookie year than Ridley has had in his entire career. With an undrafted ADP according to FantasyFootballCalculator.com, there’s no risk whatsoever to making him your last round pick.

There are many excellent reasons as to why Roy Helu could end up being one of the best values at running back this year. He has a history of both production and efficiency according to Pro Football Focus (he caught 42 out of 44 catchable targets with an insane 10.8 yards per target – none of the five running backs who rated higher had more than 18 catches).

Per Pro Football Focus, Helu was 2nd in the NFL in yards after contact per attempt out of running backs who saw at least 25% of their teams’ snaps. That’s ahead of even Marshawn Lynch. He also forced more missed tackles per attempt than anyone out of that group.

I’m not convinced Latavius Murray is any better than Helu, and could definitely be worse. The Raiders had almost refused to give him a chance until injuries forced their hand, and then they went out and acquired Helu and extreme disappointment Trent Richardson. Along with Darren McFadden, he’s the only running back to have over 100 carries in 2013 and 2014 and average less than 3.5 yards per carry in both seasons.

Here’s how much better Helu was than both of them last year: 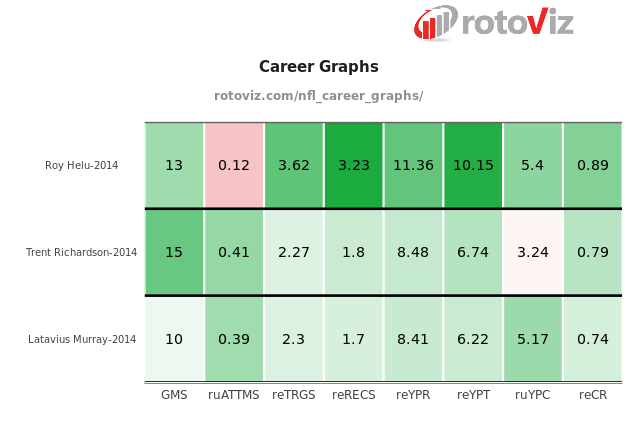 Helu bests them in every category besides for rush attempts. If he can secure even a rushing timeshare with Murray and be the main passing-down back, he’ll blow his 13th round ADP out of the water.

Coming on gangbusters in 2014 at Boise State, Ajayi was a favorite of draftniks everywhere – some even rated him as the 2nd best running back behind Todd Gurley. Longevity concerns (knee) dropped him to the 5th round of the draft however, and the fantasy buzz somewhat disappeared.

The knee is not a concern for 2014, and the Miami Harold thinks Ajayi has 2nd string duties locked up and could even challenge Miller as the starter down the road.

Similar to Latavius Murray, the Dolphins almost seemed to look for excuses to not use Miller in a featured role – first spelling him with Fumblin’ Daniel Thomas, then acquiring Knowshown Moreno and even giving Damien Williams some passing-down work. Although Miller is going to remain a large part of the offense, he isn’t a workhorse. He didn’t see 20 carries once last season, and ESPN confirms he will remain on a pitch-count this season.

This brings us back to Ajayi, who could do some real damage, given his comparables coming out of college:

Many of these players went on to make profound impacts early on in their career, and Ajayi’s college production is right in line with his potential to make a big impact right away. He’s a value at his 12th round ADP.